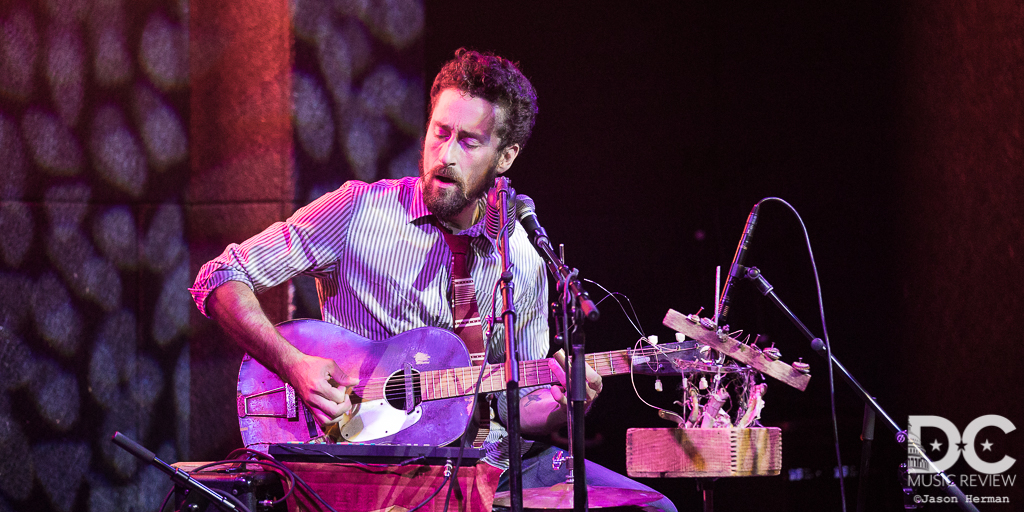 On Monday October 15 the one-man band, The Suitcase Junket a.k.a. Matt Lorenz, brought an entirely new sound to The Wharf’s Pearl Street Warehouse. Lorenz started off his set by silently sitting down at what looked like a well-organized pile of objects in the center of the stage - including a small toy piano, forks, bones, pots and a gas can. As Lorenz approached the neatly-arranged assortment, he pressed the body of his upside down guitar to his face, and began to sing “Earth Apple,” from his 2015 album Make Time in an appealing, throaty voice.  At first glance, someone might have thought that these items were just a “pile of junk” in The Suitcase Junket. However, the masterful and mesmerizing Lorenz dispelled any negative connotations after performing the music that he produced with this equipment, which he later introduced, and referred to throughout the night, as his band members.

“Swamp Yankee music,” Lorenz explained, “is what I like to tell people when they ask what kind of music I play.” Which is a better explanation than anything else, as his music has a little bit of everything from rock to folk to blues. For nearly two hours, audience members sat appreciatively listening to The Suitcase Junket. All the while, he shared anecdotes from life and being on the road, inside jokes, and even how to change the harmonics of your voice based on the placement of your tongue on the roof of your mouth. With quick-witted humor peppered with sarcasm, the moment Lorenz began speaking after his second song audience members were moving in from the edges of the room with eyes locked on stage. Audience members left the performance feeling like they shared the evening in their own living room with one of their unconventional, eclectic, and incredibly talented old friends. Lorenz easily segued between songs, switching up the rhythms of his various instruments, and changing the tone of his guitar from electric to acoustic - just as easily as he changed the tone of his voice. He played a variety of songs, with a memorable cover of “I Put A Spell On You,” and a Chuck Berry inspired tuned that got everyone moving called “Jackie,” from his 2017 album Pile Driver. At one point, he explained how he learned to whistle and to make all these different sounds with his mouth, “basically, all you have to do if hold the tip of your tongue to the roof of your mouth, shape your mouth like you’re saying “r,” and experiment with this whenever you’re in the car for the next 5 years.”

It is clear that The Suitcase Junket is passionate about, and really good at, making music and sharing it with others. His show was an absolute delight, and will leave one wondering - how can someone do all of that at once? How can someone make such great music with gas cans, saw blades broken bottles, and bent-up forks? The Suitcase Junket, Matt Lorenz, can - all by himself. Maybe next time he will teach us another way to form a new harmony in our mouth, or perhaps introduce us to new band members. All we do know is that we look forward to getting “swampy” again.