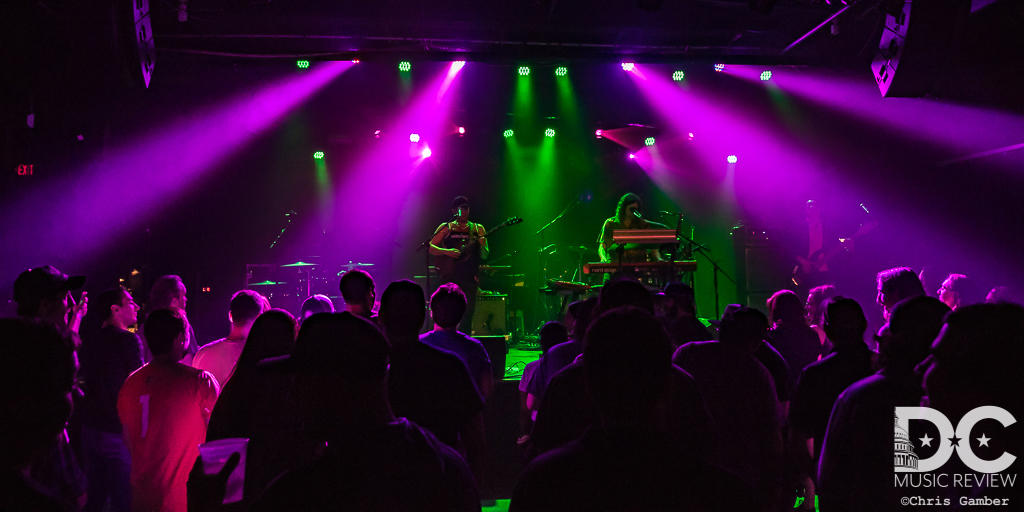 ​Friday the 13th is usually associated with bad luck, and a slew of bad movies featuring a hockey mask wearing murderer. However, anyone who made it out to Baltimore Soundstage for The Werks, Litz, and Deaf Scene were feeling nothing but lucky, and the only killing was done by the bands performing on the stage. This was a stellar lineup and it really covered a lot of musical ground. Each band brought their own unique sound and style, and all three acts complimented each other and kept the audience engaged and moving for the duration of the night. Starting off the evening was the Baltimore power trio Deaf Scene. Staples of the DMV music scene for several years now, these guys always bring great energy and tight musicianship. Consisting of guitarist Dave Fullerton, bassist Eric Courtney, and drummer Brett Schatz, the trio would showcase a huge sound for just a three piece band. Pounding basslines, and drums accented by Fullerton’s dirty but eerily ambient tone, they have really perfected the balance between heavy and melodic. They were the perfect band to start out the evening and give the crowd an injection of energy to set the tone of the show. Following Deaf Scene would be Gaithersburg based funk band Litz. These guys have been on a steady rise the past few years, and their continued rise to the top of festival lineups and headlining shows in the area seems to be inevitable. Armed with new material and a recently released album, Litz served up the funk to an amped up crowd of loyal fans on this beautiful Friday night at Baltimore Soundstage. The most current form of the Litz lineup is made up of front man Austin Litz, his brother Logan Litz on bass, Nick Thrasher on the drums, and new guitar player Pat Shine. Austin is a one man show in himself, switching between the keys and saxophone, and even the flute. He’s equally impressive playing any of the three instruments, and his easily recognizable growly singing voice makes up a very dynamic stage presence which is backed up by an equally as dynamic band. Funky basslines and drum beats lead the way for shreddy guitar solos from Shine. These guys can find a danceable groove in any style, combining prog and jam influences with classic funk rhythms and even a little go go sprinkled in, there is never a dull moment during a Litz set, and they have a great mix of flavors to serve their growing audience. The Soundstage attendees would give back the same energy the band was dishing out, dancing and grooving wearing only smiles on their faces. It was a reflection of the good vibes coming from the stage. Watch out for these guys if you haven’t seen them already, they are making big moves and are taking leaps to the next level of their musical careers. The headliners and closers of the night, would be Ohio based band The Werks. Also with a recently released new album, and with the final huge lineup announcement of their own “Werkout” festival located at Legend Valley in August (Featuring Umphrey’s Mcgee, Joe Russo’s Almost Dead, and local favorites Pigeons Playing Ping Pong), The Werks show no signs of slowing down, and their performance on this lucky Friday the 13thwould prove no different. Drawing from many different styles and influence, the band always delivers the goods that get the people dancing nonstop. The Werks are made up of lead guitarist Chris Houser, drummer and vocalist Rob Chafin, bass player Jake Goldberg, and Dan Shaw on Keys. The Baltimore crowd was treated to groove after groove as the band busted out extended jams and funky rhythms with ease. When this band gets going on a jam, all four guys are locked in as one unit. Moving from melodic sounds and funky electronic grooves to blistering guitar solos and peaks from Houser, they really have the recipe down for great tension and release jams. In my opinion, a really great band is one that works like a machine that highlights all of its parts, and these guys really are a four piece unit working as one. Listening to them play and watching them on stage, it’s very apparent the chemistry these guys have built and the rehearsal time they’ve put in to polish their live performance, and it really shines in the music they create on stage and in the studio. This of course carries over into the audience, and if the floor full of dancing feet and sweaty bodies on Friday were any indication, all of the hard work they’ve put in will continue to pay dividends for them. It’s always a treat when The Werks come to town, this evening would be no different, and if you missed them this time be sure to catch them the next time they swing through. Check out the amazing full Werkout lineup at TheWerksMusic or their Facebook page.