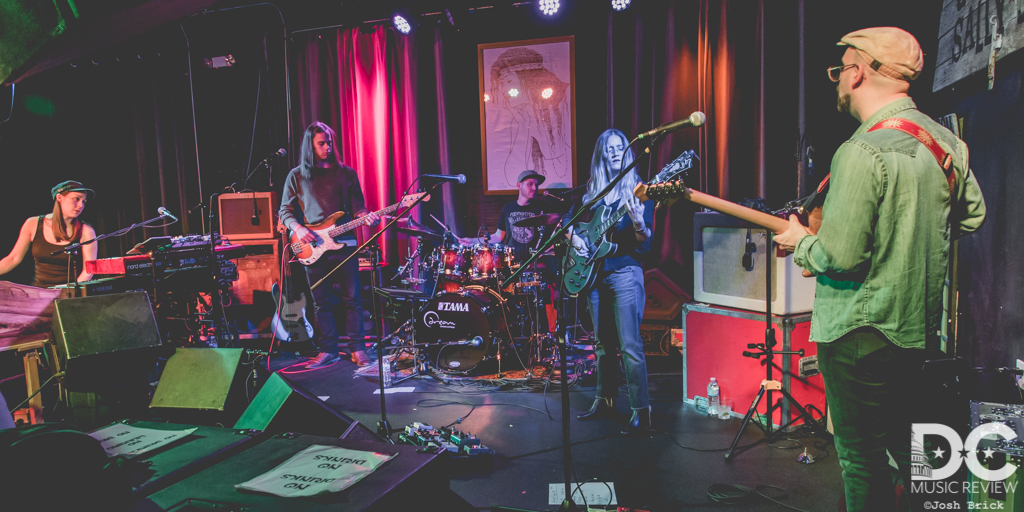 Ever since announcing their new collaboration, Ghost Light, fans of guitarist Tom Hamilton (Brothers Past, American Babies, Joe Russo’s Almost Dead) and pianist Holly Bowling have eagerly awaited the band’s 24-date spring tour. Earlier this week, Ghost Light made their highly-anticipated debut in the nation’s capital, playing a headlining gig at Georgetown’s Gypsy Sally’s, joined by Virginia's own Threesound. With no official release and a heavy emphasis on improvisation, fans’ expectations were unclear for the band, but Ghost Light delivered an engaging, energetic, and exploratory set that lasted nearly two hours. Holly Bowling is clearly enjoying herself with Ghost Light.

Holly Bowling is clearly enjoying herself with Ghost Light.

Working from a list of possible songs rather than a pre-written setlist, the band dove right into the improvisational style that Bowling and Hamilton have stated is the driving force behind the band, opening the show with a slow, psychedelic, minimalist jam. Bowling shined with delicate piano melodies and eventually organ, while Hamilton and rhythm guitarist Raina Mullen (American Babies) created a powerful atmospheric backdrop for the jam to develop. Building the intensity gradually, Hamilton eventually jumped into the lead role with drummer Scotty Zwang (Dopapod, RAQ) driving the band forward in a deep pocket. The band’s chemistry was immediately apparent as the guitarists, Bowling, and bassist Steve Lyons remained tuned in to one another’s ideas, never overpowering each other and crafting complementary riffs until the band transitioned into a more blues-inspired section that eventually gave way to Suzi Quatro’s 1974 classic, “The Wild One,” allowing Mullen to show off her prowess on lead vocals.

"With no official release and a heavy emphasis on improvisation, fans’ expectations were unclear for the band, but Ghost Light delivered an engaging, energetic, and exploratory set that lasted nearly two hours.＂ Click To Tweet Ghost Light rarely stopped between songs and went straight from the bluesy cover into an original tune, “Come Apart.” The song featured an infectious chorus and gave way to a beautiful jam where Lyons took the lead, grounding the band from the low end and providing a space for Hamilton to add distorted lead riffs and screeching effects, bringing the band into darker territory. Bowling offered leads on the organ vaguely inspired by Middle Eastern music, then the band turned on a dime, returning to an uplifting major key jam, held together by the rhythm section of Lyons and Zwang while Hamilton soared toward the high end of his fretboard and brought the band to an outstanding polyrhythmic section reminiscent of the Grateful Dead’s “The Other One.” This first taste of original music and the improvisation that followed truly spotlighted the potential of this new band and the chemistry they have together on stage.

After this tremendous peak, still early in the set, the band covered “There, There” off of Radiohead’s 2003 album Hail to the Thief, giving a taste of their versatility and ability to flawlessly segue between dramatically different genres. Using this as another launchpad, the surprise star of the night, Lyons, took things in a funkier direction, eventually returning to “Come Apart” and capping off the highlight of the show. Now an hour into their set, the band finally stopped for the first time and Hamilton took a moment to greet the crowd, noting that it was the band’s first time in DC, but “will not be our last.” The band’s Grateful Dead influence was on display in the next portion of the set in an original tune called “Nickels & Dimes” that led the band to a rousing rendition of “Brown Eyed Women,” featuring outstanding solos from both Bowling and Hamilton. After another funky, lengthy jam out of “Diamond Eyes,” Ghost Light wrapped up their incredible set with a song from Tom Hamilton’s American Babies entitled “Winter War Games,” featuring both Hamilton and Mullen on vocals. Hamilton took the opportunity to show off his love of the avante garde, playing a muted and discordant lead beyond his fret-board pulling the band along with him into unusual, psychedelic territory before exploding in one final, rocking climax to end the show.

Ghost Light left the stage with Hamilton saying, “Thank you, DC. We’ll do it again soon, I promise.” With several festival appearances and a 2018 album release on the horizon, it’s clear that this outstanding new band is on the rise, and hopefully Hamilton’s promise will be fulfilled very soon. We also had the opportunity to interview Tom Hamilton and Holly Bowling backstage at Gypsy Sally's before their show. DC Music Review contributor, Will Urquhart had a wide-ranging conversation with them about their tour, their music, and Tom's budding career in stand-up comedy.

You can watch the livestream recording of our full, unedited interview, as well as livestream recordings of sets from both Ghost Light and Threesound below. Those of you that would prefer audio-only streams of those sets can find them on Urquhart's Mixlr account.

But first, here is a highlight from the interview where Tom and Holly discuss how much their songs have changed in the short time since recording them, and why that is a good thing:

URQUHART: Usually people road test some songs before they go into a studio. Did it make you, now playing it a bunch, want to go back and change the studio stuff? Or did the studio stuff influence how you were going to take it on tour? And how did that work out?

BOWLING: That's really funny for me because in between shows when we had a couple days off I was over at Tom's, we were all over there. And we listened to one of the studio tracks that we've been working on and I hadn't heard it in awhile since we had taken the song on the road, and I was like, man I don't play any of the same stuff any more. I don't play the song the way that we laid it down in the studio at all. But that doesn't make me want to redo it. It's more like, that's what it was then, like it's a snapshot in time. That's how we were playing these things when we recorded this stuff. And now we're doing something different and that's great. I don't think that all this stuff should be frozen in time. I don't think it should be like a static thing that only ever happens one way. You know? I think that's proof that things are evolving and changing fast and continuing to remain interesting and have room to grow and change.

"I don't think that all this stuff should be frozen in time. I don't think it should be like a static thing that only ever happens one way.＂-@hollyjbowling backstage at @gypsysallys Click To Tweet

URQUHART: Yeah and that seems somewhat fitting coming from people that have a lot of Grateful Dead experience. Jerry, I feel like, often talked about music the same way where he's like, that was what it is and now it's something else.

HAMILTON: Absolutely, I think that's one of the things we're fortunate to be able to do. To be in a scene where improvising is so embraced and where songs get to grow up. There are songs that we play from some of my old bands that, one song I wrote when I was 16 or 17. That's a lifetime ago.

URQUHART: You still play that one?

HAMILTON: We do. And what that song means now is completely different than what it meant when I was kid. But it's still there and it's still a good tune and people still dig it. And that's an interesting thing. And I think that's all you can ask for with any of the material, is for it to grow and to change. And with varying results. Things sucking is just as cool as things not sucking, because at least you're taking the chance and getting into the batter's box and going for it. So yeah, I think it's awesome that we all embrace that. We just play. When you start overthinking everything is when it gets weird. Let's just do what we do, and that's the five of us do.

"I think that's one of the things we're fortunate to be able to do. To be in a scene where improvising is so embraced and where songs get to grow up. ＂-@tommyhamilton backstage at @gypsysallys Click To Tweet Click here to see the setlist for Ghost Light's performance at Gypsy Sally's on April 17, 2018 This is awesome. #stfu #fanart #ghostlightband

Enjoy livestream recording of Ghost Light at Gypsy Sally's recorded by our collaborator Will Urquhart.

Enjoy livestream recording of Threesound at Gypsy Sally's recorded by our collaborator Will Urquhart.

Enjoy our interview with Tom Hamilton and Holly Bowling at Gypsy Sally's recorded by our collaborator Will Urquhart.