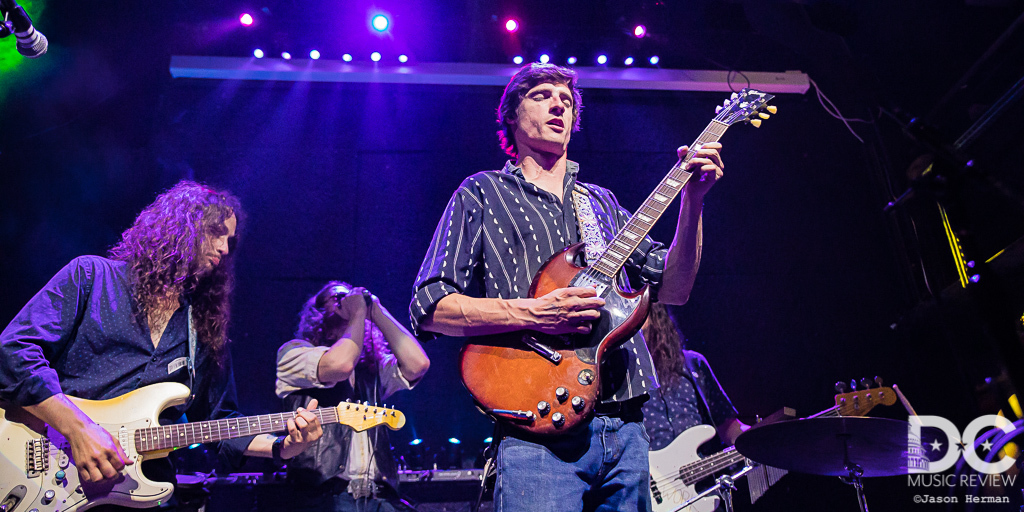 On Wednesday, May 7th, Travers Brothership wowed a packed venue as they headlined with an hour of powerful, soulful, funky, bluesy, and psychedelic sounds. (Editor Note: Our photographer Josh Brick emphasized that psychedelic sound with his photo gallery)

On Thursday, May 8th, these two rapidly up and coming bands from the south, combined efforts for a fantastic night of funk and blues at the 8x10 in Baltimore. Opening up the night was The Travers Brothership. Twin brothers Kyle and Eric Travers make up half of the band (Kyle plays lead guitar), and Eric is on drums. Ian McIsaac and Josh Clark make up the other half of the quartet on keys and bass, respectively. Their sound is soulful and funky, and they show great chemistry when they improvise, putting a psychedelic stamp on their songs and stretching them out with ease. Throughout the performances, Josh Clark, Eric Travers, and Kyle Travers shared singing duties that underscored the depth of talent this band possesses. Rich vocals stood out and on their own that weaved their way throughout the musical landscape of the night. Three distinct vocal styles accompanied seamless musical interplay, radiating solos, and vibrant peaks that highlighted the talent this band. These guys can definitely jam, and I am really looking forward to seeing them again soon whenever they pass through DC, Baltimore or anywhere in the DMV. With the crowd fully warmed up and loose, Memphis based act Southern Avenue took the stage. Another band featuring siblings, sisters Tierinii and Tikyra Jackson on vocals and drums, and Ori Naftalay and Jeremy Powell on guitar and keys. Unfortunately, Tierinii was suffering from a sore throat and was not able to sing at the 8x10. However, her sister Tikyra did a fantastic job filling in. I was doubly impressed as I've always heard how hard it is to drum and sing at the same time. Also, I should note that even though Tierinii couldn't sing, she still walked on stage and got down with the same great energy she has when she's performing. This band has been making a lot of noise down south, and with a new self-titled album out on Stax Records, they're sure to be spreading their funky soul sounds all over the country sooner rather than later. After rocking the crowd for several songs on their own, they invited the Travers Brothership on stage for a collaboration jam, a cover of Stevie Wonder's "Superstition." This was a real treat; you could tell these two bands have played together before, and the chemistry was on full display. The interplay between the musicians was exceptional, both guitar players traded killer solos, and the crowd ate up every second of these extended jam.

With their Baltimore performance in the books, Southern Avenue put the finishing touches on their American tour before heading off for a few concerts in European tour before returning to the United States. The Travers Brothership continues to tour Mid Atlantic and the Carolina's before headng out west in July.

If you're a fan of soul, funk, and psychedelic jams, these two bands are not to be missed if they are in your town. Both acts are coming up fast and will be playing more and more shows in bigger venues in no time. We have taken notice of each band and not only will they be playing more shows in larger concert halls, but each has been invited to more prominent festivals.

Southern Avenue will return again to the DMV on August 17th at Music In The Blue Ridge when they perform with Sister Sparrow.  Look for Travers Brothership in the DMV when they return to the area on July 24th for FloydFest and once again on August 17th at Hot August Music Festival. In particular we are very excited to see Travers Brothership at Hot August Music Festival.

Although this is not a recording of their 8x10 performance we would like to share with you a performance from 2017 where the Travers Brothers performed with Marcus King. Travers Brothership - A Way To Survive Southern Avenue  will be performing at Music in The Blue Ridge on August 17th, 2019.

Music in the Blue Ridge

To Learn More about Southern Avenue please use the following resources:

To Learn More about Travers Brothership  please use the following resources: