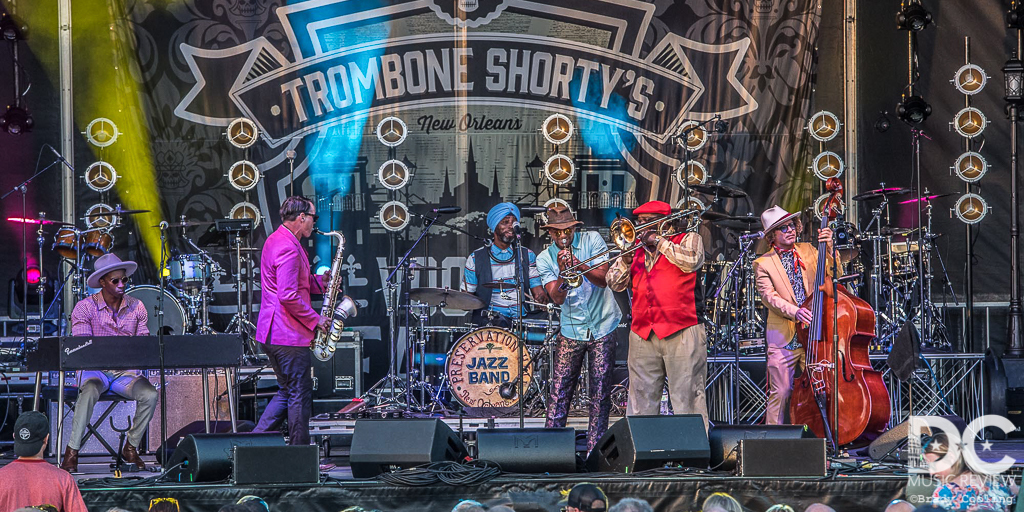 Some things are quintessential New Orleans just by the word or what it is: jazz, voodoo, culture, food, and of course Trombone Shorty. So when The Freeman Stage and Trombone Shorty  announced they would be bringing his Voodoo Threauxdown tour to Delaware, on August 16, 2018, I was beyond stoked! The spirit of New Orleans and the vast amount of culture and heritage is alive and well in the music of Shorty and his band; as well as the other diverse and amazing performers that joined this tour: Preservation Hall Jazz Band, Galactic and New Breed Brass Band. I had been looking forward to this show ever since it was announced way back in the spring and rightfully so, it was one of the best shows I saw this summer by far. On the day of the tragic and sad passing of the beautiful and legendary Queen of Soul, Aretha Franklin, the feelings and sentiments were truly in full force. A full long afternoon full of music bringing the vibe and voodoo of NOLA straight to coastal Delaware.

New Breed Brass Band is exactly as their name says, they are one of the new breed in a very competitive and talented world of jazz today. The youngest group of performers by a decade or two, but not lacking the talent and passion by any means. They really brought it in the early afternoon hours in the soaking hot sun reminiscent of the bayou along the waterfront. New Breed is a band to watch closely as they have the same energy and sound you expect from any brass band, but also the youthfulness and attentiveness to the generations past. If the new breed of jazz is anything like them, then we are certainly in good hands for years to come! Galactic is not only a word meaning outer space and dimensional, but also one of the funkiest and most unique groups on this planet. Combining everything that makes New Orleans great with a juxtaposition of different sounds and genres molded together they match a sound that is so unlike anything you will ever hear. Starting as a normal group they have added the talent and beauty of Erica Falls on vocals to truly take it to the next level, even penning a tremendously soulful and passionate cover of “Rock Steady”by the late Queen of Soul herself on this afternoon. Bringing the funk and soul into the afternoon, the legendary Walter “Wolfman” Washington joined Galactic onstage for some songs to have this tremendous force into their own set. One of my favorite bands keeps getting better and better with time! Preservation Hall is not only an institution in the City of New Orleans as a legendary club where so many iconic figures have graced the stage in the past and today alike, but also a fantastic jazz band. Preservation Hall is one of the few groups that has been able to take the old school sound and bring it to contemporary audiences for decades. Although some members have come and gone, the heart and love has always been there amongst the band. Not only is their music timeless, but on this particular night, their colorful and stylish outfits matched their eclectic musicianship. They have not only mastered traditional jazz tunes, but have been able to continually write new material and deliver these songs with such ease and passion. For a moment in time the aura around the stage was taken back a few decades walking and busking around NOLA right to Preservation Hall for a good old late night party in the streets. Trombone Shorty has been playing music for as long as he could walk, joining jazz and brass bands as a kid and teenager and getting a huge name for himself all across the Crescent City. Since then he has traveled the globe bringing this same joy and love for his city and music as a terrific songwriter and trombone and trumpet player as well. His band has always been top notch and including adding a second percussionist and female backup vocalists for this particular tour as well. The energy that he brings is hard to beat and compare too as he continues to amaze all audiences alike. Many people I saw or talked to at this show said it was one of the best, if not the best show they have ever seen at The Freeman Stage, which is saying something. When Shorty is able to bring an entire ensemble of different groups together to collaborate and bring the culture of NOLA to life it is a beautiful thing, joining forces with the great Cyril Neville for a few tunes, and bringing up the first opening band, New Breed Brass Band for the encore; truly a divine joining of all musical forces old and young together. A beautiful thing indeed when the cultural influences of New Orleans meet with the spiritual aspect and as well as the musical love to bring a very unsuspecting place like Delaware and transform it into Jazzfest or any other street or area of New Orleans for a night.

Each band is so different but so similar in what they represent and how they do it. All have their own unique sound and style but have continued the legacy of those performers from New Orleans from yesterday and today. The cultural significance of the city all personifies the music and people that come from it. It is hard to think of a more relevant and important city in the US and world for music and a mix of culture, dedication and passion then New Orleans, but luckily these musicians have been able to take this and run with it; or really play and have fun with it. Who dat!