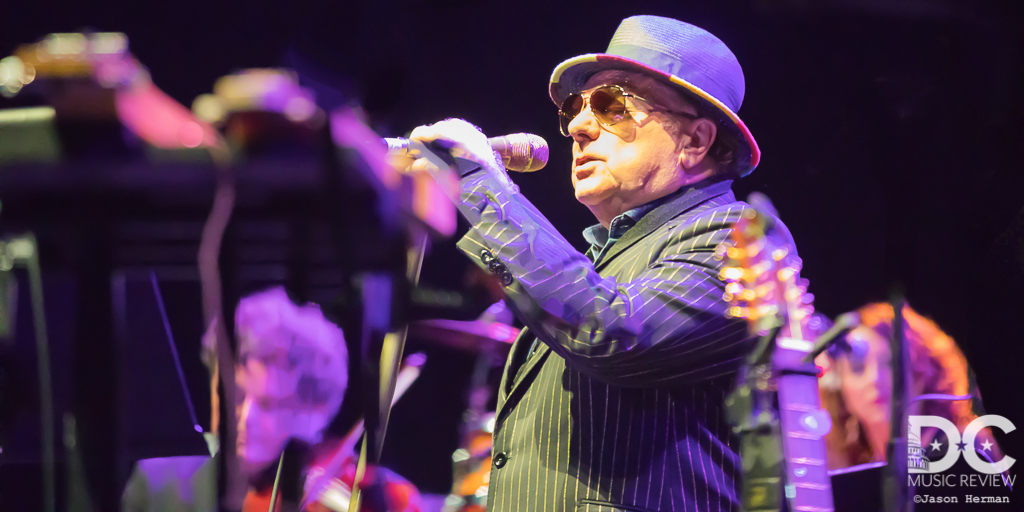 Van Morrison has played in the background of my life since I was a kid.

“Brown-Eyed Girl” was my mom’s comforting consolation prize to me when there were never any songs written for girls named “Abbie.” “Into the Mystic” will always remind me of my first boyfriend who somehow managed to deepen my love for music through the select few Van Morrison songs he had on repeat. Hearing that iconic voice in both the background and forefront of movies always inevitably boosts my appreciation for them.

So, how do I even begin to write about Van Morrison?

A living legend, obviously, with a voice that is somehow unaffected by age. A voice that is weathered by decades of tours and travel, but is as celestial and iconic as it was 50 years ago. A voice that still feels modern for people who grew up with it, but is also a blanket of nostalgia for those only just discovering it.

"Morrison’s show was not intended to be one that boasted his greatest hits or most beloved tracks, but rather about exemplifying great music." Morrison is a timely man. Promptly at 8:00 P.M. everyone shot to their feet at the first spot of the man himself, sporting a pinstriped suit, trilby hat, and dark glasses. He played an extensive set that lasted exactly 90 minutes, beginning with a jazzy rendition of “The Way That Young Lovers Do.” Morrison’s show was not intended to be one that boasted his greatest hits or most beloved tracks, but rather about exemplifying great music.

Morrison took the classically romantic “Have I Told You Lately That I Love You” and morphed it into a jazzy and upbeat tune that seemed better suited for a picnic than a wedding. It took a minute or so into the prolonged intro for concert-goers to place which song was playing, but once they grasped it, there were gasps of excitement and whispers of “jazz” echoing throughout Jiffy Lube Live. Despite the fact that Morrison planted his feet front and center and only shuffled around when he needed to grab his harmonica or saxophone, he had an enormously powerful stage presence that captivated the pavilion.

"...a voice that is weathered by decades of tours and travel, but is as celestial and iconic as it was 50 years ago."

Although Morrison has played these songs and this setlist numerous times before, it still felt fresh and innovative. His more recent albums are more jazzy and bluesy than his earlier releases, yet even with a revitalized sound, he finds a way to make the most widely felt ideas — love, faith, mortality — feel fresh and thought-provoking. That voice, an instrument of its own, with its riffs and unwavering power, has the unparalleled ability to express itself better than any of us can.

Although I’d never seen Morrison live before, he sounds just as sharp and raw in person as he does on my vinyl records that I listen to on repeat in a smokey daze whenever I feel nostalgic or particularly contemplative. Morrison has a power behind his voice that has not diminished as a result of his increasing age.

I’ve never felt so utterly content at a concert before. Watching the tattooed couple a few rows in front of me slow dance to “Days Like This,” felt so intimate and reserved for ones own living room that I felt intrusive staring. Yet, I couldn’t look away because it was so evident that Morrison is a source of romance and comfort in their relationship, as he is in many others.

When the ever-jazzy “The Party’s Over” blared out, the audience let out audible groans and “boos” as they recognized that the setlist was nearing its end. However, every song that felt like the last wasn’t — Morrison and his impeccable band kept the party going for a few more songs, including the classic “Brown Eyed Girl” and “Gloria.”

The lights flashed on during the final two songs, revealing the entirety of the audience on their feet singing and dancing along, and me, grinning stupidly ignoring the stinging in my eyes, staring in awe at how Morrison’s music had connected so many people from so many walks of life.

"That voice, an instrument of its own, with its fresh riffs and unwavering power, has the unparalleled ability to express itself better than any of us can."

Morrison covered Them’s “Gloria”, a song that propelled him to stardom,  as the last song of the evening, with the crowd shouting the chorus out with him. Before the song’s end, Morrison walked off stage mid-lyric, the ghost of his vocals still lingering behind him on stage. We half expected him to come back out, but alas, no, Morrison had made his Irish exit without a second glance back, leaving the band to play for an additional 10 minutes without him. While each band member had a moment or two to show off their talents, the show ended somewhat abruptly, leaving people hungry for more.

I don’t know if I’ll have another opportunity to be at another Van Morrison show, but I count myself lucky that I had the opportunity to go to this one.

At 73 years young, Morrison is a timeless treasure, whose legacy will transcend time.

Click here to see the setlist for Van Morrison's  performance at Jiffy Lube Live on September 16, 2018

1. The Way That Young Lovers Do

7. Have I Told You Lately That I Love You

19. Jackie Wildon Said (I'm in Heaven When You Smile)