Walk the Walk and Squawk the Squawk: Rooster Walk Music and Arts Festival Delivers on All Fronts 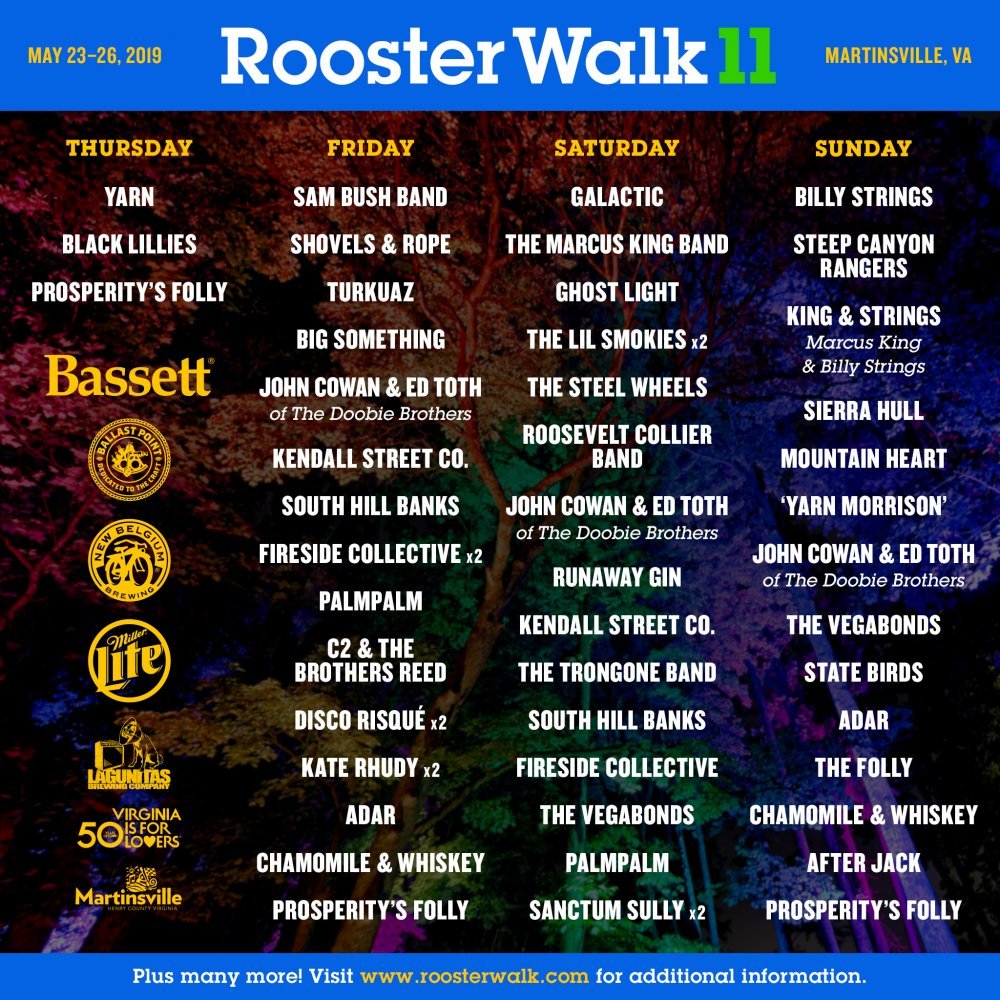 Music festivals are a dime a dozen these days. They range from massive 100 thousand plus person multi-day events to one day locally based functions that don’t even make a blip on most people’s radar. For some, the mega-festival is the way to go with a long list of chart topping artists, but for those who want a more mellow experience without sacrificing quality acts, Rooster Walk in Martinsville, Virginia should be a serious consideration. The festival is held on Pop’s Farm, a scenic, spacious plot of efficiently laid out land which allows everyone room to move, without having to walk a mile from their campsite to the stages. Trees are abundant, so there’s no need to sacrifice sleep in the morning due to hot tents or seeing music to stay cool in the midday sun. It’s family friendly with a dedicated kid’s play area, lots of activities throughout the day, but no one is hindered from letting loose and getting a little wild either. Sound too good to be true? Well it’s not. The stacked lineup is what really sets it apart from other smaller festivals. Last year’s Rooster Walk was the premiere of King & Strings, a collaboration between guitar phenoms Marcus King and Billy Strings, with Billy’s band, and Jeff Sipe on drums. The pair met for the first time only a few hours before their set and pulled off a face melting performance that will be remembered by those in attendance for a long time to come. This year, they’ll be closing out the festival in the same fashion. With headliners such as Galactic, Sam Bush Band, and Shovels & Rope and a slew of talent such as Turkuaz, Big Something, Ghost Light, and Sierra Hull, there is something for everyone. Also, expect to see many special guest appearances on all the stages. This festival is known for collaborations and surprise visits from other band members who have performed during the weekend. But wait, there’s more! The festival was created in memory of two of the organizer’s friends, Edwin “The Rooster” Penn and Walker Shank, and the festival has raised over $175,000 for local and regional charities with over half of that going to the Penn-Shank Memorial Scholarship fund for local high school seniors. The festival also has a charitable initiative that helps obtain used musical instruments, fixes them, and puts them in the hands of local kids to explore their love of music who may otherwise not be able to afford the equipment.

Rooster Walk has something for everyone, and gives back to the local and musical community. Don’t miss out on this one of a kind event this year!