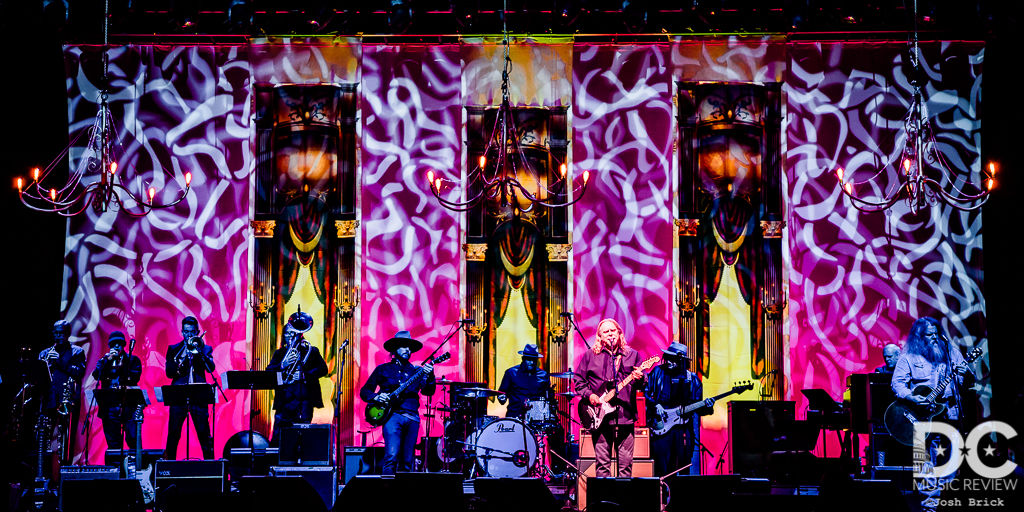 Veteran rocker Warren Haynes and an all-star cast of musicians came together to pay tribute to The Band at The Theater at MGM National Harbor last Thursday, November 14. Lukas Nelson and Jamey Johnson shared lead vocal duties with Haynes and were backed by a powerhouse band including Don Was (bass), John Medeski (Organ, Piano, Keys), Terence Higgins (drums) and The Levee Horns - a four piece brass section let by Mark Mullins (trombone). For two long sets, the talented ensemble delivered an inspired tribute to The Band's farewell concert on Thanksgiving Day in 1976, one often regarded as one of the most memorable live music events in rock history. A rousing "Up On Cripple Creek" started things off with a bang before the horns emerged for "The Shape I'm In." The chemistry between Nelson and Haynes was apparently early, while Johnson's vocals shone on "Georgia On My Mind". The band welcomed Dave Malone (guitar, vocals) from the Radiators and Cyril Neville (vocals, percussion) and took us "Down South in New Orleans" before a sultry "Who Do You Love" that included an amazing segment from Haynes on slide guitar that left the entire room buzzing. The set closed with the nostalgic sing-along of "The Night They Drove Old Dixie Down" that featured Nelson's distinctive yet fitting voice for a verse or two and the night was just getting started. After a break, John Medeski emerged solo on keys for a  dazzling intro that would make Garth Hudson proud before launching into "Chest Fever" with the help of the rest of the band. Warren and company were locked in for set two that included a beautiful take on Neil Young's (and Lukas' "boss") "Helpless." Former Muddy Waters' guitarist and special guest Bob Margolin joined the powerhouse band and lended his gritty vocals and edgy guitar licks for a rollicking "Mannish Boy." The closing segment proved especially moving as Nelson lended his passionate vocals on Bob Dylan's "Forever Young" before the entire room "took a load off" during "The Weight," arguably The Band's most recognizable song. The set closed with a stunning rendition of "I Shall Be Released" that included a powerful vocal crescendo from the lot of vocalists. After a brief encore break and a rousing roar of appreciation from the lively crowd, the band returned with Neville to take the vocal lead on Dr. John's "Such a Night." With one tune left, the all-star group left the audience with a rocking "Don't Do It" that ended with a searing guitar duel between Warren and Lukas. The ensemble gathered on stage for a final bow and a well-deserved ovation from a crowd that knew it witnessed something special.

The tour concludes on Saturday at Bridgestone Arena in Nashville for a proper blow-out set to include the core band joined by The Band's Robbie Robertson, Darius Rucker, Michael McDonald, Emmylou Harris, Vince Gill, Margo Price, and Nathaniel Rateliff.