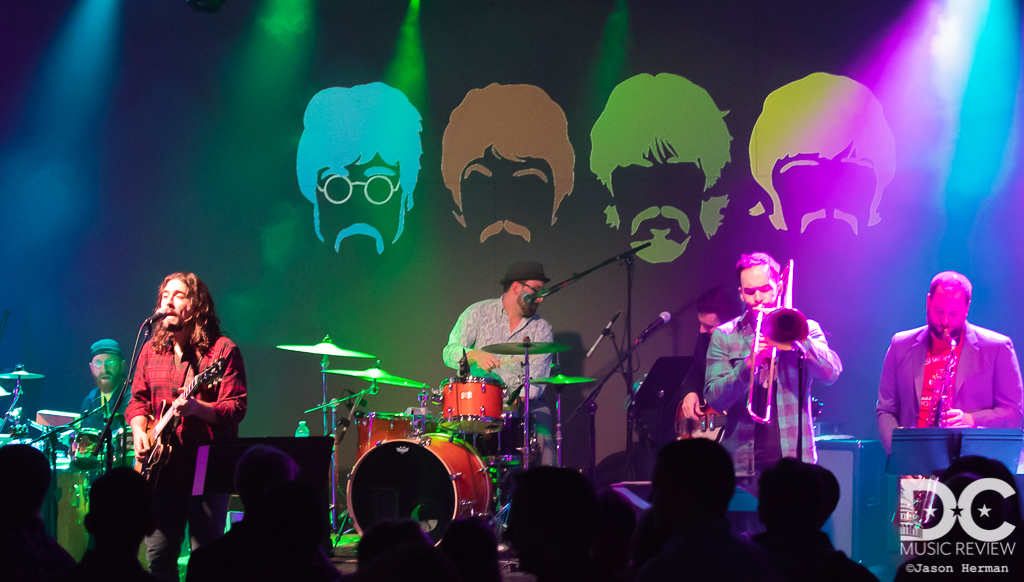 To borrow from “Lucy in the sky with diamonds”, picture yourself in a venue near a river, with tangerine trees and reggae vibes. Somebody calls you, you answer quite slowly, a Beatles band with dub in their eyes.

Yellow Dubmarine coversthe songs of thetimeless band, The Beatles, but with their own unique dub (reggae) flair and brass components.

On December 22, Yellow Dubmarine performed at The Hamilton for their 5th annual holiday performance.

Throughout the show, projected light images paid tribute to the “Fab Four”, ranging from classic Beatle photos and silhouettes, to in honor of the holiday season, reindeer pulling the iconic yellow submarine, in lieu of a sleigh. Further adding to the TheBeatles themewas bassist Aaron Glaser, who performed on a Hofner ‘Violin’ bass, the bassfor which Paul McCartney has become synonymous with.

Yellow Dubmarine performed a wide breadth of the Beatles catalogue,including A Hard Day’s Night andLet It Be. The evening was filled many classic sing-alongs in which the audience gleefullyparticipated.During the particular sing-alongof“Ob-La-Di Ob-La-Da” the band further stoked the crowd by yelling “I can’t hear you all!”, that led the audience to sing even louder to this timeless song.

“Dear Prudence”, a heartfelt and uplifting classic kept that same feeling and sentiment played in the dub reggae style. This performance included a John Lennon song that was newly composed by Yellow Dubmarine, “Happy Xmas (War Is Over)” just in time for this Holiday show.

One of the highlights of the show was “Tomorrow Never Knows”. Upon completion of the original psychedelic song, the band launched into a full jam session, highlighting the musicians' musical talents.

The main performance ended with an explosive “Hey Jude”, complete with an extended sing-along. The band re-emerged for an encore, to perform “I Want You (She's So Heavy)” This one song was not enough to satisfy the crowd, whocalled foradditional songs.The request for“Octopus’s Garden” from someone in the crowd must have struck a chordwith the band (no pun intended), who went on to perform this song as well.

The evening's show was truly an uplifting musical experience that left those in attendance in good spirits leading into the Christmas holiday weekend. As people walked out of the venue, they carried the concert with them and could hear themsinging many Beatles songs into the night.

DC Music Review looks forward to seeing Yellow Dubmarine at their 6th annual holiday performance at The Hamilton Live, if not sooner.

All songs are Beatles covers unless otherwise noted.

4. I Should Have Known Better

6. And Your Bird Can Sing

23. She Came In Through The Bathroom Window

Although we will argue that all music is better live, please sample Yellow Dubmarine's album, Abbey Dub, for a taste of this blissful music.