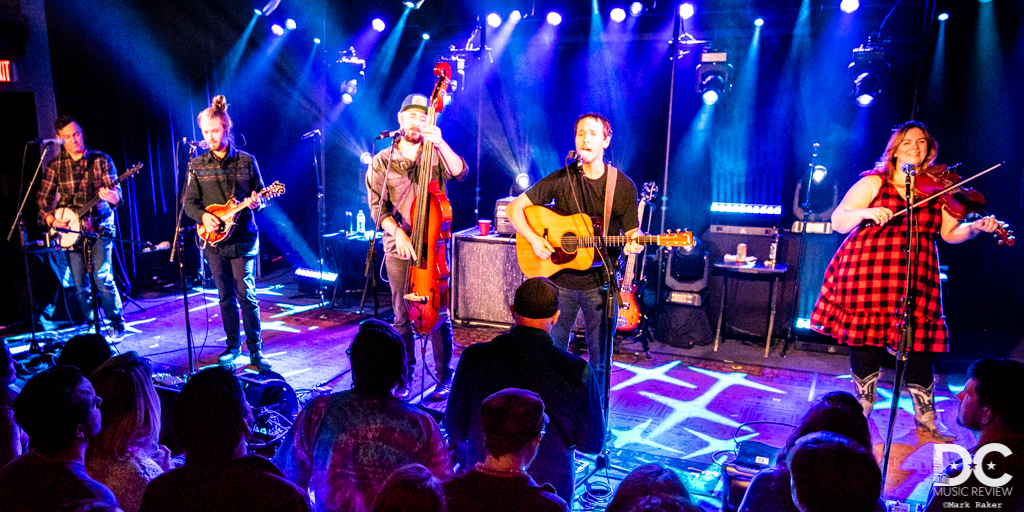 Brad Parsons Band brought their ​"genre bending blend of psychedelic rock and Americana" music, as described on their website, to Union Stage ​​and after showing the audience what they had to offer, definitely gained quite a few new fans.  Belting out some truly great original hits and commenting on how good the pizza that he had seen several folks eating looked, the band members wrapped their set and hung out in the crowd talking to attendees for the rest of the evening. Traveling down from Annapolis, where they played the night before, through some interesting weather, Yonder Mountain String Band was ready to party and a little inclement weather wasn't going to stop them or their fans!   ​An opening solo that bass player Ben Kauffmann disclosed his band mates supposedly insisted on was a seugway into "Traffic Jam", a track off their 2004 album Mountain Tracks.   ​Acknowledging the precipitation that had been relentless all day and switched back and forth from all forms, he gave praise to attendees, ​​​ "Thank you for braving what is just the most disgusting weather to be here with us today," stated bass player and lead singer Ben Kaufmann "we appreciate it very much".  ​  A great transition into a song off another album from earlier in their career "Rain Still Falls", they proceeded to get the audience into a frenzy of foot moving with the next few songs, all a great buildup to The Seldom Scene's hit, "I Know You Rider" to which almost the entire venue sang along with.   Inviting Justin Mazer, onstage to join them to help out on what is one of many tracks for Ben's supposed unfinished Bluegrass Opera​, "Looking Back Over My Shoulder" proved to be quite a treat for the band and the audience members alike.

Allie Kral continually killed it with her fiddle fingers and amazing voice and threw it all the way back to the nineties with a cover of Blind Melon's "No Rain" again hitting on the days outdoor activity.  The song was sung beautifully and made me immediately go home to find the vinyl copy of the album.  Personally, I enjoy both versions but Allie really makes it her own with the femininity of her voice and of course, her charming smile onstage.   She demonstrated her vocal ability well again on "Travelin Prayer" and the solos by not only her but every member of the band were something truly hypnotizing. After closing out the main set list the band returned to an excited audience for a two song encore that kept people moving excitedly around Union Stage enjoying both the music, venue and the atmosphere.  Plenty to clap for, the audience was more than satisfied with their snowy Thursday and showed the band much love.  Yonder Mountain continues their tour with a stop next month in Mexico for the phenomenal lineup organizers of the Strings and Sol Festival have put together.  If you are among the lucky ones getting to attend this fun in the sun festival, enjoy!!!

Enjoy audio of this show courtesy of Jeff Prater