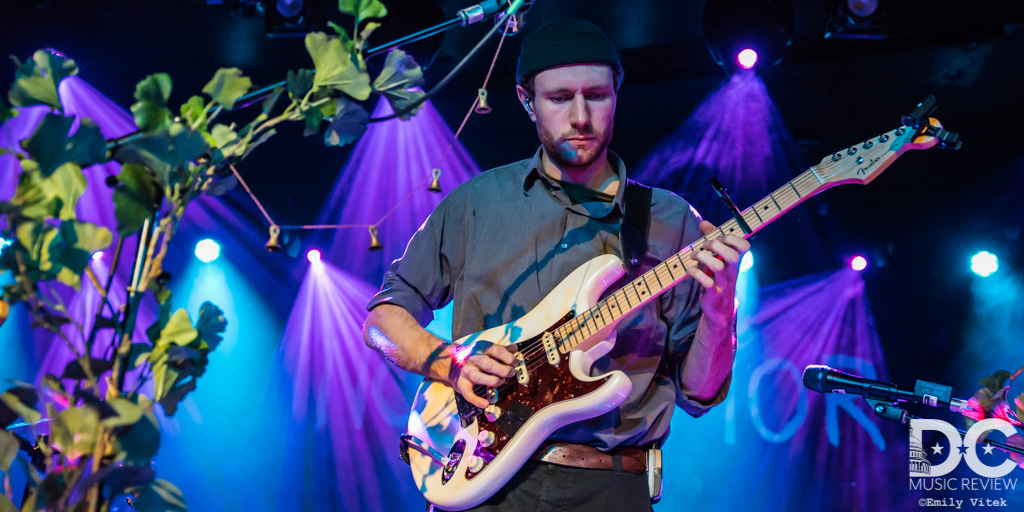 “It’s great to be able to play somewhere and people show up,” Ali John Meredith-Lacey said, half-joking, half in awe.

Ali, better known under his stage name, Novo Amor, played Union Stage last Wednesday. It was the second stop on his first ever North American tour, which is completely sold out.

Audience members more than “showed up”. They pleaded online for extra tickets, crowded the venue early, and provided their undivided attention throughout the duration of the too-short set. Novo Amor are a serene and mystical blend of Bon Iver and Jonsi, one that feels both rich and powerful, while still being organic and natural. With a four-piece band backing him up, including former partner Ed Tullet, listening to the band felt like walking through a garden. With opening chords that sounded like wind chimes and greenery draping over the microphones and stage, it was impossible to not feel at warm and comfortable in the space.

The Welsh band played intently, looking so at home and intimate with their instruments. With their eyes shut, each member looked so in the zone — to watch them was to watch a living thing that swelled and pulsed with every note. At times, the audience was too in awe to decide whether to clap and potentially disrupt the organic flow, or to simply stay silent and absorb.

"...to watch [Novo Amor] was to watch a living thing that swelled and pulsed with every note."

The instruments were bolder, more vibrant live, with the violin especially flourishing during “Anniversary,” a track off Novo Amor’s 2018 release Birthplace. The songs weaved in and out of each other flawlessly, with Ali’s ethereal voice lulling the audience into a cozy stupor. Due to that sense of calm, when the drums and bass made their appearances in the choruses, the heavy beats were almost shocking, adding a dimension that isn’t always present in the recorded tracks. While “Carry You” and “Holland” are both typically relatively calming tracks, the band made the songs come alive with fantastic drums and bass, sometimes taking me by surprise. Tracks that are falsetto dominated on the record have a bolder sound live. “Sleepless,” for example, was nearly unrecognizable. It had a power behind it that I hadn’t ever heard before, solidifying the fact that Novo Amor is one that’s meant to be experienced live.

“Terraform” closed off the set before the lads walked off stage, featuring lead vocals and harmonies from Ed Tullet. The song, off their collaborative album Heiress, featured Tullet’s equally haunting falsetto. After Ali introduced the song, fans —old and new— shouted out words of encouragement for Tullet, cheering deafeningly at the song and setlist’s close.

The band walked off stage for a quick minute, before walking back out for a brief two-song encore, which Ali introduced by apologizing, “Sorry about the whole walking off and on [stage] thing. It’s a bit weird, isn’t it?” Ed joked, “it only took so long cause I had to blow my nose.”

Margaret summed the night up best when she said that the evening’s line up consisted of “gentle people listening gentle music.”

Click here to see the setlist for Novo Amor's performance at Union Stage on Wednesday, November 14, 2018.