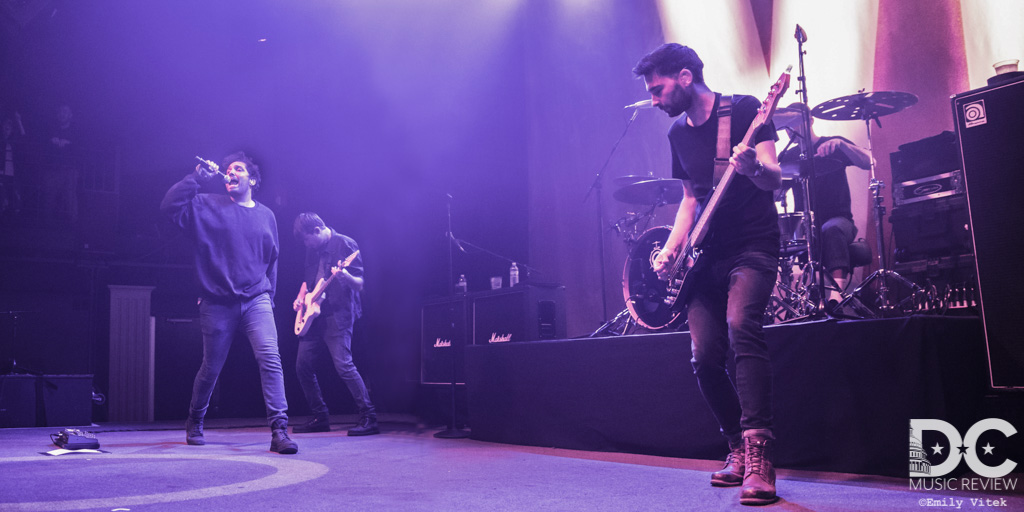 The last time UK alternative-rock band You Me at Six played in DC in 2014, they were promoting their fourth studio album Cavalier Youth. Nearly five years and two albums later, vocalist Josh Franceschi, guitarists Max Helyer and Chris Miller, bassist Matt Barnes, and drummer Dan Flint return to the 9:30 Club as a part of the “Back Again Tour”. After questioning the band’s future viability, You Me at Six went on two writing retreats in the UK as a last-ditch effort to save the band. A few endless months later spent writing lyrics and tracking instruments, You Me at Six created their sixth studio album, appropriately titled VI. Showcasing a variety of genres including rock, indie pop, R&B, and electronic, VI includes songs such as “Back Again,” “3AM,” “IOU,” “Fast Forward” and “Straight To My Head.” Indie band Machineheart opened up the evening with a few songs off their debut album, People Change. Sung by frontwoman Stevie Scott, Machineheart’s set included songs such as “Altar” and “Do You Love” that captivated the audience with their ethereal sound. Next up was the pop-rock trio Dreamers, best known for their radio hit “Sweet Disaster”. Quickly rising to fame, Dreamers performed other fan favorites such as “Screws” and “Die Happy”. You Me at Six started off their set with “Fast Forward”, with Franceschi quickly moving across the stage while singing the energetic first track off VI. Fans eagerly followed Franceschi’s movements with their cell phone cameras in hopes of snapping an Instagram worthy shot of the singer. They returned back to their pop punk sound with older songs like “Loverboy”, “Reckless”, and “Lived a Lie”.  The energy remained high throughout the evening with fans jumping around and Franceschi showing off his best dance moves during songs like “Back Again”, “Night People”, and “Fresh Start Fever”. Towards the end of the set, Franceschi looked to the back of the 9:30 Club and asked the lighting technicians to turn off the lights. The bright purple and blue lit stage quickly went black as Franceschi asked the crowd to take out their phones and turn the flashlight on for the next song. Performing the inspirational “Take on the World”, band members looked out into the sea of illuminated dots that surrounded the two-story venue. After a few more songs, Franceschi asked the audience how many of them had seen a You Me at Six performance before and was pleased to see half the crowd excitedly raise their hands.

Next, he asked how many in attendance were experiencing their first concert ever, to which a few scattered hands were raised. Franceschi jokingly told the newcomers that he would have also recommended that night’s show as their first time. He went on to explain how encores work at concerts, going into details about how both the fans and band members know that announcing a last song of the night rarely means it is actually the last song. Instead, the bands will walk off stage for a few moments while listening to the audience chant “one more song” until eventually they walk back on stage to perform the rest of the set. Franceschi laughed while pointing to the setlist on the floor stage saying how the plan is all written out on the piece of paper. As expected, You Me at Six departed from the stage upon finishing their self-proclaimed final song, “Bite My Tongue”, only to return shortly after the crowd cheered for an encore. The encore contained a wide variety of their discography with older songs like “No One Does It Better” and “Room to Breathe” and one of their newest songs “Straight to My Head”.  You Me at Six ended their performance with their 2010 hit “Underdog”, with Franceschi hopping off stage to sing along with the crowd.

The “Back Again Tour” continues until mid-March where You Me at Six will perform across the United States before heading back to the UK to play at a number of music festivals including the popular Reading Festival. While it is uncertain when You Me at Six will return back to the United States after this tour, we certainly hope they don’t leave fans waiting another five years. If that’s the case, better start packing your bags now and book a flight to Europe for the UK dates. Fans unable to make the transatlantic trip can instead relive some nostalgia by checking out the music video below for “Underdog”.

2. No One Does It Better

3. Straight to My Head