Young the Giant Inspires Audience at The Anthem 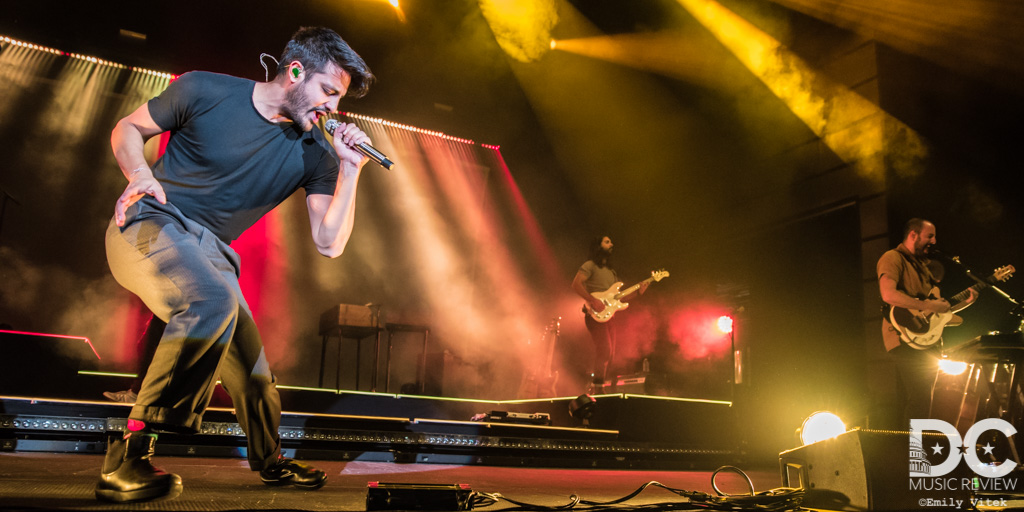 On Friday, November 16 Young the Giant had a phenomenal finish to leg one of their tour for their new album, Mirror Master, at The Anthem. They definitely finished strong - a four song encore kind of strong. Lights started off the evening with a magical performance. Lead singer, actually named Lights Poxleitner-Bokan, nimbly flitted about the stage with bright red hair, and a strong, yet soft, voice. The venue was filling up, more than usual for an early opener. At the beginning of their performance, and Lights even remarked, “I recognize a few people here from other shows!” During her performance, you could hear the audience singing along, and at some points even loud enough to hear them singing in Lights’ absence. The peak of her performance, getting the entire audience engaged and truly showcasing her talents, was during “Lovefool” (The Cardigans cover). Ending their set with their song titled, “Giant,”changing the last line of the song from, “If we could be giants,” to “If we could be Young the Giant,” hyping the crowd for the headliner. While anxiously awaiting Young the Giant to take the stage, the audience on the floor started packing in like sardines, and all of the edges of the upper levels were fully occupied. When Young the Giant appeared, and immediately started playing the title track from their latest album, Mirror Master, the crowd went wild. Lead singer Sameer Gadhia theatrically danced all over the stage, beating a tambourine on his thigh, an attribution to the song’s lyrics, “But tonight, you will play the tambourine.” The band had something special prepared for each song, even if it was something subtle, or something like crowd surfing. Gadhia continued his zestful dancing throughout the evening, and his fellow band members mirrored his energy. This almost palpable energy from YTG is definitely one of the reasons they're a must-see performance.

Another pro of live performances is how the band chooses to play songs live, and seeing their raw emotion as they perform their music their own way. YTG exemplified this with a beautiful acoustic version of, “Art Exhibit.” Prior to starting to pick his guitar for the tune, Gadhia explained, “So we have this series online called In the Open, and for those of you who don’t know what that is it’s essentially,  it’s taking our music, taking it outside separating it from the studio; Separating it from the noise, and playing it because we believe that a song should be played, should be able to be played at least, with guitar and vocals. So we figured for this show - this is our last show of leg one of mirror master tour - we figured we’d bring it to the stage here.” One particularly special moment began with guitarist Jacob Tilley picking the dreamy, but mysterious riff for “Firelight,” and Gadhia explained “So we figured for this song, you guys could share that part of yourself that you never share with anyone, through a source of light. So, at the end of this song, I want you to put a light up in the air -  a cell phone light, a lighter, something like that - and share that part of yourself….” It was a a moment of awe looking around and seeing thousands of bright white lights, and the occasional small flame, listening to a soft melody paired with a song about being in love.

Another memorable moment was during chart topper, “Cough Syrup,” from their debut 2011 self-titled album. Clearly a song that the audience was anticipating, their engagement during this song - singing, dancing, phones out filming - was at the peak of the pre-encore performance. The afterglow from this song would linger until the encore commenced.

Exiting the stage pre-encore after playing, “Call Me Back,” was a nice touch, given the song title. Although the audience wasn’t “waiting by the phone,” per the lyrics, they were calling the band back out on stage after their departure. The band had a restored energy they brought back out for the encore - they were going to finish strong. Starting off their epic four song finale with “Superposition,” the audience was hyped back up. Before starting “Tightrope,” Gadhia held out his arms and someone garnered him with a sparkly gold jacket - which matched perfectly with his gusto. Finishing their epic four song grand finale with, “My Body,”guitarist and vocalist Eric Cannata crowd surfed with his guitar to, at least, the middle of the floor. Every member of Lights came back out for an epic dance party on stage that included stage crew members and YTG’s manager.

Gadhia lingered on stage after everyone had gone off waving, clearly not really ready to leave his audience behind. Their music already makes you want to sing along and move along to it, and then paired with their emotion, desire to connect with their audience, high energy, and planned theatrics - Young the Giant is a must see live performance.

Click here to see the setlist for Young the Giant's performance at The Anthem on November 16, 2018

2. Heat of the Summer

5. Something To Believe In