A Legendary Christmas with John Legend at MGM Theater 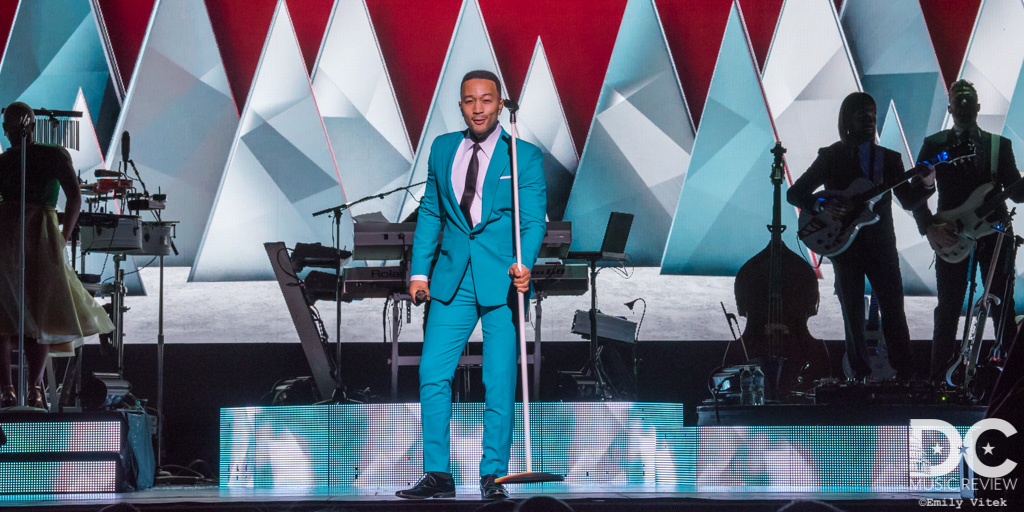 On Wednesday night, fans across the United States sat in front of their televisions anxiously awaiting the start of the NBC holiday special, A Legendary Christmas with John & Chrissy. Meanwhile, fans in the Maryland and DC area were lucky enough to see John Legend live for his performance at the MGM National Harbor Theater. The evening’s performance was just one of many on “A Legendary Christmas Tour”, in support of Legend’s sixth studio album and first Christmas album, A Legendary Christmas, released earlier this fall. Featuring artists such as Esperanza Spalding and Stevie Wonder, the album includes eight classic Christmas songs in addition to six originals. Yet the new album and tour are not the only remarkable events in 2018 for Legend. Just a few weeks before the album’s announcement, Legend won an Emmy for his performance in Jesus Christ Superstar Live in Concert, making him the first African-American male to win an EGOT – an Emmy, Grammy, Oscar, and a Tony. Fans came to the event in their best festive attire, with outfits ranging from glamorous gowns to ugly sweaters and even suits with snowmen patterns. Many concertgoers gushed to those around them about Legend’s velvety voice and complimented how extraordinary his voice sounded live. Throughout the evening, Legend played a number of songs of his new album, including “What Christmas Means to Me”, “Silver Bells”, “No Place Like Home”, “Bring Me Love”, “Christmas Time Is Here”, and “By Christmas Eve”. Decked out in a teal suit, Legend danced across the festive stage accompanied by background vocalists Natalie Imani, Ayana George, and Keri Lee. Legend was also supported by a full band comprised of Korey Riker, Christopher Stevens, Aaron Goode, and Dominique Thomas. Two outfit changes and a number of festive songs later, Legend delighted fans and finished the evening with a performance of “All of Me”, the hit song Legend wrote about his wife, Chrissy Tiegan. With close to 900 million plays on Spotify, “All Of Me” was the perfect way to end the evening on a heartwarming note.  “A Legendary Christmas Tour” will continue through the end of December with stops in New York, Chicago, Seattle, Los Angeles, and more. Later this month when you are celebrating and spending time with loved ones, you will want to play A Legendary Christmas to make this holiday season extra special. Check out John Legend’s brand new music video below for "Have Yourself A Merry Little Christmas," featuring Esperanza Spalding, off A Legendary Christmas.