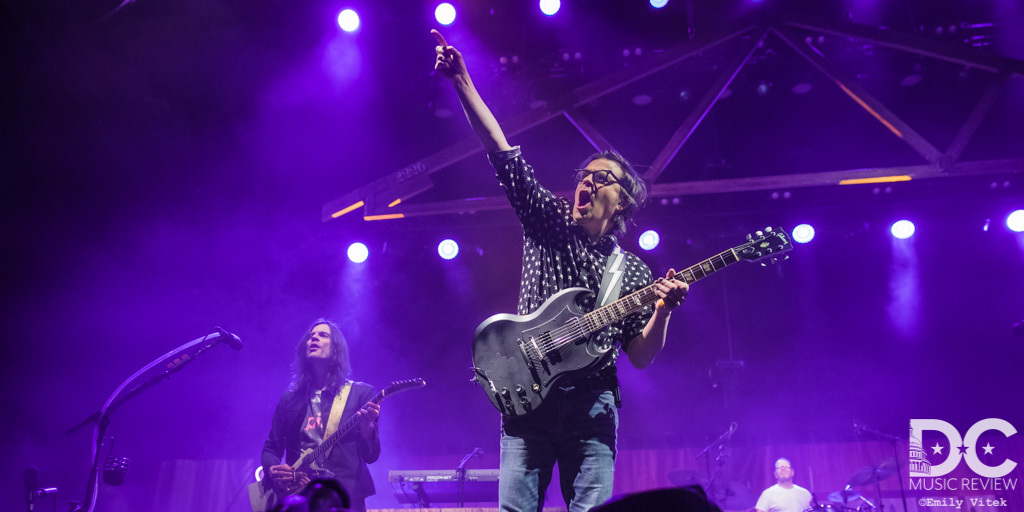 Fans who missed Weezer’s intimate performance at the Black Cat back in February were lucky enough to attend their Royal Farms Arena show a few weeks later on St Patrick's Day. Over 10,000 fans from the Baltimore area showed up decked out in green to see the popular rock band along with the other performers, the legendary Pixies and UK rock band Basement. Starting out the evening was Basement, the five-piece band from Suffolk England whose sound ranges from pop-punk to alternative rock. Basement rose in popularity in 2012 after the release of their second studio album, Colourmeinkindess, which landed a spot on Billboard’s Top 200 chart. Shortly after finishing a tour for the album, Basement went on an indefinite hiatus so vocalist Andrew Fisher could finish his teaching certification and drummer James Fisher could finish art school. Nearly two years later in 2014, Basement ended their hiatus and released their EP Further Sky. Their third studio album, Promise Everything, was released in 2016 and contained memorable songs such as “Submission”, “Oversized”, and “Brother’s Keeper”.

In 2017, Basement signed with record label Fueled by Ramen, known for mainstream rock artists such as Jimmy Eat World, Panic! At the Disco, Paramore, Twenty One Pilots, and Fall Out Boy. The last time Basement performed in the DC/Maryland area, they performed for 2,000 fans at the Fillmore Silver Spring while touring with The Front Bottoms. This time around, they were greeted by over 10,000 audience members in the Baltimore stadium. Basement opened their set with “Disconnect”, off their October 2018 album Beside Myself. Their set was short but sweet, including fan favorites such as “Aquasun”, “Whole”, and “Promise Everything”. Next up were rock classics, Pixies, who have been going strong since 1986. With their unique sound, Pixies have influenced many artists and have been credited as shaping the alternative rock genre as a whole. Artists such as David Bowie, Radiohead, U2, Nirvana, and even Weezer have cited Pixies as a major musical influence.  Their most notable song “Where Is My Mind” was featured in the 1999 David Fincher film “Fight Club” featuring Brad Pitt and Edward Norton.

Pixies’ sixth studio album, Head Carrier, was released in late 2016 and their seventh studio album is set to release in September 2019. Fans who do not want to wait until September for new Pixies content can look forward to their podcast “Past is Prologue, Pixies” which will start June 27th. Hosted by New York Times best-selling author Tony Fletcher, the 12 episodes will be available on Apple, Spotify, and other major podcast platforms. Unlike most performers, Pixies’ changed their setlist each night of the tour and therefore fans had no idea what to expect when arriving that evening. For this particular evening, the co-headliners played 23 songs including “Where Is My Mind?”, “Here Comes Your Man”, “Monkey Gone to Heaven”, and “Classic Masher”. They also performed covers of songs such as “Winterlong” by Neil Young and “Head On” by The Jesus and Mary Chain.

Last up for the evening were California rock stars Weezer, composed of vocalist Rivers Cuomo, guitarist Brian Bell, bassist Scott Shriner, and drummer Patrick Wilson. Originating back in 1992, Weezer is known for influencing many of today's popular artists such as Blink 182. The Grammy winning band has become a household name with songs that have appealed to different generations over their 27-year career so far. Weezer has a lot to celebrate in 2019, with the release of two new albums and the 25th anniversary of their first studio album Weezer (Blue Album). Released back in 1994, Weezer (Blue Album) contains some of their most notable hits such as “Buddy Holly” and “Say It Ain’t So”. Shortly after the release of their eleventh studio album Pacific Daydream back in 2017, an internet fan campaign was created asking Weezer to cover the popular song “Africa” by Toto. A few months later, Weezer jokingly posted a cover of a different Toto song, “Rosanna” in response to the campaign. However two days later, Weezer gave into fans and posted the much requested cover of “Africa”. The cover was an instant success, hitting number one on Billboard’s Alternative songs chart in August 2018, and was Weezer’s first number one hit since “Pork and Beans” in 2008. The cover quickly became a radio staple and has since been played more often than the original on many rock stations.

After noting the major success of “Africa”, Weezer surprised fans in January 2019 with an unannounced release of Weezer (Teal Album). The ten song album contains Weezer covers of various hit songs from throughout the years, including “Everybody Wants to Rule the World” by Tears for Fears, “Take On Me” by A-ha, and “No Scrubs” by TLC. A little over a month later in March 2019, Weezer released their highly anticipated thirteenth original album Weezer (Black Album). A music video for the lead single “Can’t Knock the Hustle” was released back in October and featured bassist Pete Wentz of Fall Out Boy. Despite the release of the Black Album just two weeks prior to the Baltimore show, Weezer’s setlist highlighted the Teal and Blue Albums. In addition to favorites  “Buddy Holly” and “Say It Ain’t So”, Weezer also performed “My Name is Jonas”, “Undone (The Sweater Song)”, and “Surf Wax America”. In addition to “Africa” and other songs off the Teal Album, Weezer performed a cover of “Stand by Me” by Ben King. Other top songs from previous albums were played, such as “Thank God for Girls”, “Beverly Hills”, “Island in the Sun”, “Perfect Situation”, and “Hash Pipe”. Out of the 22 songs on the evening’s setlist, only one song off of the Black Album, “Living in LA”, was performed. This leads to the question of whether or not Weezer will be embarking on a tour focused on the Black Album sometime late summer or fall.

The spring tour continues through mid-April with stops in Portland, Vancouver, Sacramento, Vegas, and more. Shortly after the tour comes to an end, Weezer will be playing the gigantic music festival Coachella before making a few stops in the UK and Europe. If you missed their performance in Baltimore, keep an eye out for a potential Black Album tour in the next few months. Or if you have the money to spend, you can book a flight to Coachella in April and see them there. Both the Teal Album and Black Album are available for purchase here and are available now on all major streaming platforms.

Click here to see the setlist for Weezer's performance at Royal Farms Arena on March 17th, 2019

13. Up the Beach (Jane's Addiction cover)