Circles Around the Sun Bring Disco Psychedelia To Union Stage 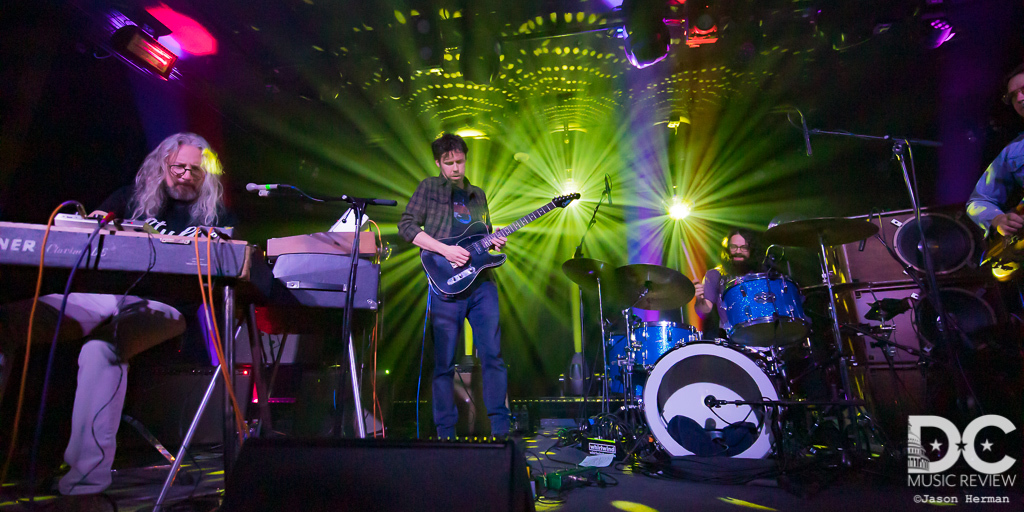 Circles Around the Sun has come a long way from the band's humble beginnings recording set-break music for the Grateful Dead's "Fare Thee Well" shows in 2015. Since then, the band played its first live show at Lockn' Festival in 2016, toured nationwide, released another album of original music in 2018, and recorded one more album, a self-titled release set to drop this week. Sadly, the band has also had to overcome the tragic loss of their founding member and bandleader, guitarist Neal Casal, who died last August. The band's new record represents the final works of Casal, who actively encouraged his bandmates, bassist Dan Horne, keyboardist Adam MacDougall, and drummer Mark Levy, to continue touring and making music after his death. Adding guitarist Scott Metzger of Joe Russo's Almost Dead for this leg of a nationwide tour, the band returned to DC for its first gig at Union Stage.

With a backdrop of five disco balls reflecting and casting light and color around the basement venue, Circles performed a set of instrumental psychedelia that provided no shortage of danceable grooves and exquisite improvisation. The band's new tunes, including "Detroit Dos," "Money is No Option," and the first single, "Baby Man," offer a different soundscape than many have come to expect from their first two albums, which have been mellow and ethereal. These new songs are upbeat, synth-driven dance music. Naturally as a result, MacDougall characterizes the band's sound and serves as the driving force behind its tone. Metzger slotted in to the band's sound incredibly well, honoring the low-key, atmospheric tone set by Casal in the band's early years and played songs from the band's Interludes for the Dead true to the spirit of the late guitarist. Still, he found opportunities to add his own flare, infusing solos with the fierce blues style that fans of his work with other bands have come to expect when he takes the stage. The newest tunes in the repertoire suited Metzger's style particularly well, an encouraging sign that Casal's legacy will live on with this band and its rotating cast of guest guitarists.

Circles Around the Sun showed in this performance that it is a band that is more than the sum of its parts. Casal will always be a central part of the band's identity and sound, but as the band continues to live on beyond him, it's clear that the unit will evolve and grow with his musical influence at its core. The band's tour will continue with a slew of west coast dates and return to the DMV region this June, with another performance in Garcia's Forest at Lockn' Festival, this time on a stage that has been named in honor of Neal Casal. Circles Around The Sun Shines Brightly In Their 2020 Tour Opener

Circles Around The Sun Perform at The 9:30 Club [Audio/Photos]