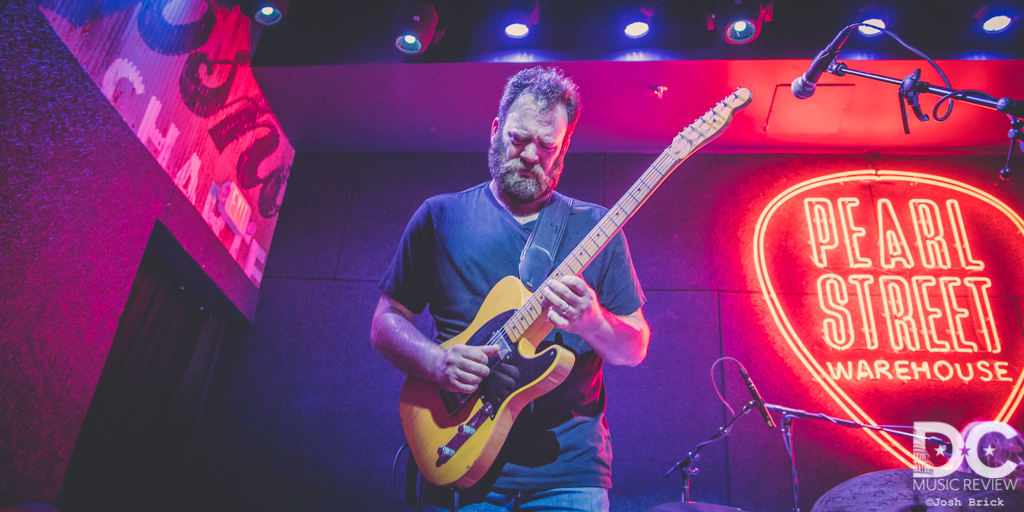 A rainy night in The Wharf didn't stop fans of Baltimore-based phenom Cris Jacobs from coming out to Pearl Street Warehouse to enjoy some great music. The Jonathan Sloane Trio opened and did a great job at getting people moving with their wide ranging sound. Seeming to bring their very own group of fans with them, the trio got the folks seated at tables on the main floor dancing and even the gentleman on the Rascal scooter was up front and center singing along to a song or two. Their sound included everything from a jamband sound, pop to blues and Americana, which attendees were incredibly pumped about. Familar-sounding opening riffs to many of their songs had me doing double takes thinking that they were covering other artists. Their melodies quickly turned original, however, and proved to be put together very well, invoking a bit of music memory with new found favorites on numbers like 'Midnight Sun' that sounded much like 'Simple Man' by Lynyrd Skynyrd for about the first five seconds.  A very talented group with a great stage presence and ability to rock the multiple different genres, they were an auditory treat to combine with the sounds of the night that were still to come. I will be sure to check them out anytime they are in town. After a short break and more rain, Cris Jacobs (guitar, vocals), Dusty Ray Simmons (drums, vocals), and Todd Herrington (bass, vocals) were joined onstage by Jonathan Sloane (guitar, vocals) himself to play music ranging from old to new and including some amazingly impressive playing by all three guitarists onstage. If you have ever seen the band live, you know that Jacobs has a cigar box guitar which he loves to play and decided to open the show with two songs on the magical music box, one being the title track from his 2016 album, Dust to Gold. Cris is a big fan of the DC music scene, being from right up the road in Charm City, and noted that he was excited to be back in our neck of the woods, especially at the 'nice, new venue' that is Pearl Street Warehouse.  With this appearance last week, Cris Jacobs Band is the first group to have completed the trifecta of being able to say that they have now played at all three music venues in the newest hotspot that is The Wharf . He also brought along some new music for us to sample as well and along with the fact that he just put out an album with one of the famous classic soul legend Neville brothers, Ivan, also featuring his father Aaron, he has been a busy man. One of the new tracks he featured for the evening was 'Buffalo Girl,' a slower sounding tune with stunningly beautiful lyrics, perfect for one of the first chilly nights of the season: "Buffalo Girl, in the cold and wind, wondering when Summer gonna come again".  The new track was followed by one of my personal favorites, 'Jack the Whistle and the Hammer,' which showed off the tremendous skills of the guitarists on stage. A large majority of the songs off the earlier mentioned album were heard Friday night mixed with a sampling of what's to come from the new hits, much to the delight of attendees. The highlight of the evening, in my eyes, was when the cigar box guitar was resurrected, only for Cris to inform us that he had broken one of the only three strings the instrument has. The announcement came as they started into the opening of my other favorite, a song often and wonderfully covered by none other than Greensky Bluegrass, 'Bone Digger.'  A song that manages to invoke some deep down baritone singing, the handicap being the lack of string made absolutely no difference and the crowd foot stomped and sang along accordingly. A great way to close out the show, leaving the fans wanting so much more, the band briefly left the stage to come back for an encore that was another new track, sure to have fans high with anticipation for a release date.

It's worth noting that one of the perks of Pearl Street Warehouse is the fact that they are able to bring some great names to a venue that remains intimate and not intimidating for guests or artists. A perfect example of that is the fact that the entirety of both bands were out in the crowd after the show was done, talking to and taking photos with fans, which is often the case at the venue. 7. Jack the Whistle and the Hammer

9. The Devil or Jesse James