Father John Misty Gets Emotional With ‘God’s Favorite Customer,’ While Still Being Authentically Himself 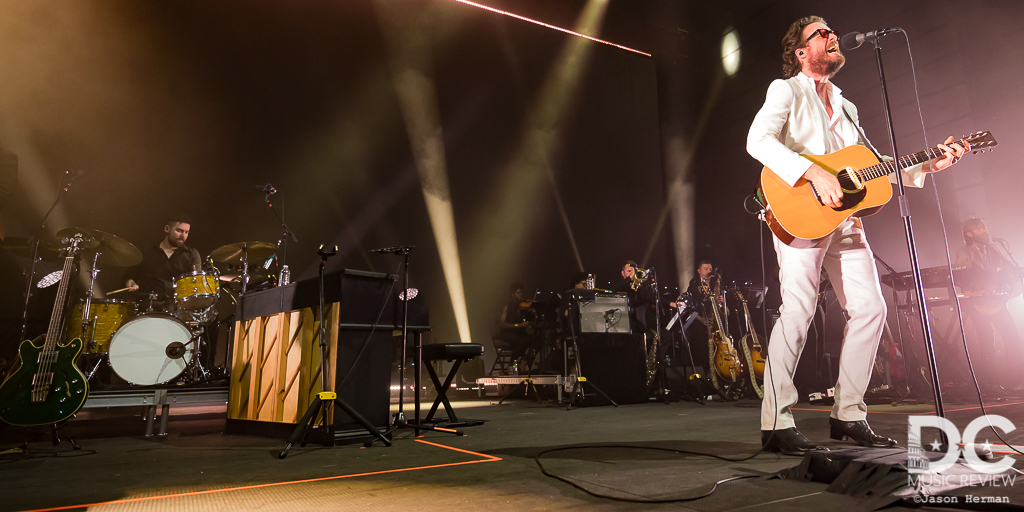 Father John Misty, the monikered alter-ego of Josh Tillman, is an anomaly of a man. The ever-mysterious, yet reliably-blunt musician took the smoky Anthem stage to an orchestral fanfare dominated by a majestic horn section. At the first spot of the famously bearded, white-suit clad, sunglasses-donning figure, fans rushed from the corners of the venue to reclaim their spots near the stage.

The smoke cleared, and FJM’s crisp and honey-sweet vocals rang out into the cavernous room with the opening belt of “Nancy From Now On," his voice somehow echoing and reverberating throughout the packed crowd.

If you’re not listening closely, FJM’s ballads might be mistaken for happy-go-lucky tunes, and his concert can somehow feel like a romantic affair. Perhaps it was the abundance of couples in attendance, the coziness of a concert on a stormy day, or the heavy-handed horn section, however a close examination of the lyrics indicate anything but cheeriness. His older material is dark and ironic, morbid even, laden with self-deprecating introspection and commentary on pop culture. With a well-rounded setlist that slightly favored his latest release God’s Favorite Customer, a shift in performance was evident when he performed his new tracks. Those songs felt more dialed back, more vulnerable in comparison to songs off his veteran albums. FJM got particularly emotional during those ballads, reinforcing the intimate feeling of the concert.

In fact, his show felt more like an acoustic set in someone’s living room rather than at a 6,000 person capacity venue. The nearly 10 piece orchestra faded into the smoky background, with FJM a bearded vision in white commanding the forefront.

Perhaps there is an unsaid reason for the extra level of emotion in the new album. In an interview with The Ringer, FJM was quite vague when speaking about God’s Favorite Customer, saying:

“Look, I don’t want to talk about what happened. Maybe in 30 years from now I will. I know that sounds dramatic. But to talk to me about what this album’s about, I’d have to bring other people into the picture who don’t want to be.” FJM didn’t let the shadowy writing process cloud his performance. Instead, he made the most of the massive stage, sashaying back and forth between the wings, a trail of cheers following in his wake. Knowing exactly how to work and rile up a crowd, FJM twisted and flailed flamboyantly in a way that both felt ironic and gaudy, as well as truly authentic and goofy. There was not a passive fan in attendance. Singing, dancing, cheering, concertgoers couldn’t have been more pleased with the performance. With a setlist spanning 23 songs, including favorites such as the falsetto favoring “Ballad of the Dying Man,” “Bored in the USA,” and “I Love You, Honeybear,” the concert felt like a generous display of FJM’s greatest and latest.

Although he kept the small talk to a minimum, his music and dance moves spoke for themselves, with the show sometimes feeling like a spoken word cry for action. His energy and emotions felt tangible — it was impossible to walk away from a show like that and feel anything but excitement, and perhaps a tinge of nostalgia or sadness.

Father John Misty continues his tour around the United States, hitting up numerous festivals before heading to Europe this fall. Make sure to catch him on tour while you can.

Click here to see the setlist for Father John Misty's performance at The Anthem on August 2, 2018

1. Nancy From Now On
2. Chateau Lobby #4 (in C for Two Virgins)
3. Only Son of the Ladiesman
4. Disappointing Diamonds Are the Rarest of Them All
5. Just Dumb Enough to Try
6. Mr. Tillman
7. Total Entertainment Forever
8. Things It Would Have Been Helpful to Know Before the Revolution
9. Ballad of the Dying Man
10. Hangout at the Gallows
11. Bored in the USA
12. Please Don't Die
13. I'm Writing a Novel
14. Date Night
15. Hollywood Forever Cemetery Sings
16. Pure Comedy
17. God’s Favorite Customer
18. We're Only People (And There's Not Much Anyone Can Do About That)
19. I Love You, Honeybear