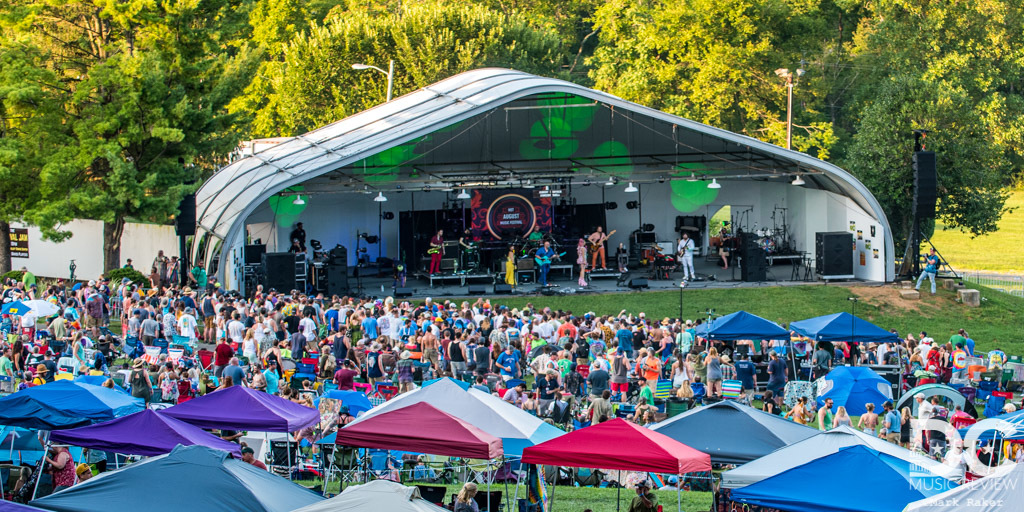 Once again, the Hot August Music Festival (HAMF) lived up to its name. The weather was hot but the music was hotter. Three stages, 12 bands, playing almost 18 hours of music jammed into one day… Festival goers were happy that the bad weather held out, there was a nice breeze and no afternoon thunderstorms at Oregon Ridge Park - just heat that fueled the music. The Baltimore based bluegrass band Dirty Grass Players kicked off the day of hot music on the mainstage at 11:30. They were excited to be back home after traveling the country almost non-stop for the past 6 weeks. They were not the only local talent to entertain the crowds that day.

Up next on the BTTFS was Mississippi born and raised, 2015 Grammy- nominated blues musician Cedric Burnside. Cedric grew up with and learned music from his grandfather R.L. Burnside who was a singer, songwriter and guitarist. Burnside has won the Blues Music Awards honor as drummer of the year four times. He will be back in the DC area in September at the Union Stage and October at the 9:30 Club. Vanessa Collier closed out the Back to the Farm Stage mid afternoon. The multi award nominated and First Place winner for lyrics in the International Songwriting Competition, Collier also is honored as Best of 2014 Blues Breaker on Dan Aykroyd’s Blues Mobile. Collier a saxophonist, vocalist, and songwriter, entertains with a mix of funk, soul, rock, and blues. In the words of Buddy Guy, “There’s a young lady [Vanessa Collier] came onstage with me, I forget where I was, but she’s playing an alto saxophone, and man, she was amazing.” Collier will be back in the DC/Baltimore area for the 24th Annual Bluebird Festival on Saturday, September 28, 2019.

Travers Brothership started the music on the Professional Vision ZEISS Stage. Hailing from Asheville NC, twin brothers Kyle and Eric Travers have been playing together since they were 7. After getting together to jam with after school friends in 2012, Josh Clark, Ian McIsaac joined the Travers to form the band. Kyle has been described as a Hendrix style player, fun to hear and see.

One of the best things about HAMF is the opportunity to see great artists for the first time. For many people, Larry McCray was one of those performers. No serious music lover would have been able to watch his version of "Soulshine” without needing to see them again. The Lil’ Smokies from Missoula, Montana only get to the Baltimore/DC area a few times a year. Since their first east coast performance at Delfest 2016 they have picked up a large local following. They asked who saw them last time they were in Baltimore and then commented that it sounded like more people screamed and clapped than can actually fit in the 8x10. In addition to songs that the crowd knows and loves they also experimented with some new material. Jake Simpson’s fiddle playing was so hot one fan commented that she thought it would burst into flames. During breaks in the festival season the Lil’ Smokies will be heading into the studio to record their 4th album. Samantha Fish has been expanding her fan base exponentially since 2007 when she launched her recording career. A repeat performer at HAMF, during the 90 minute set the band played a few songs off their new album coming out in September. She had the audience ignoring the heat and jumping and clapping. Fish said, “We just played the Hot August Music Festival. It was our second time playing here and I had a great time. Even more fun than last time. It’s a beautiful event. Brings out all different kinds of people. And we got an opportunity to play in front of some new fans. We are really grateful. It was really fun. The audience was amazing.”

At 1PM Melvin Seals and JGB band featuring Washington, DC local John Kadlecik was the second act to take the main stage. With the sun beating down on him, Seals took to the keys. I’m sure that the band was wishing the sun was already down as they started the set with “Let’s Spend the Night Together”. During “It Takes A Lot to Laugh, It Takes A Train to Cry” there was a power issue on stage that was quickly resolved. Their set was a musical who’s-who cover-fest with songs from The Rolling Stones, Smokey Robinson, Bob Dylan, The Grateful Dead, The Jerry Garcia Band and more. After this band introduction: “If Del McCoury got psychedelic and spent a long night listening to Black Sabbath and then he woke up, shotgunned a beer, and played music you would have this... Grab a beer stomp your feet and make more noise than you’ve made all day for Billy Strings.” Everyone was waiting to be blown away, and weren’t disappointed. Strings, true to form, put on a show that won’t soon be forgotten. He played a mix of styles which showcased his singing and guitar talent. The 16 song set started off with “The Tall Tall Grass” and went into the “Dust in a Baggie”. From there he kept everyone dancing and singing. Billy Strings and the band couldn’t hang out until the end of the festival because they heading to Michigan after the show. “Yeah man. Killer times at Hot August Music Festival. It sure lives up to its name. It’s been hot and fun down here. Hopefully we can come back next year.”

Seeing Turkauz live is always a treat. What could be almost as much fun? Seeing the new Turkuaz Live Concert Film. Scheduled to release in their hometown of Brooklyn on Sept 10th, None’s A Ton. They brought their funk to HAMF, starting with “Chatte Lunatique” and keeping the music going for 95 minutes ending with a 13 minute” Brain Drain into Bubba Slide”. Pigeons Playing Ping Pong (PPPP) first played HAMF in 2015 on the side stage and in 2019 they were the headliner. Pigeons is proud to represent Baltimore as they travel around the world and at this HAMF they enjoyed their shortest commute of the summer. Special guests “cruising it out family style” included Cris Jacobs who joined for 3 songs including the encore. John Kadlecik also joined for the encore. PPPP was a perfect funky way to end a jam packed day of music and comradery. Pigeon’s Greg Ormont was blown away by the festival. “Wow - That was so much fun. The Baltimore crowd came out and made us feel like home. We felt the love the entire night and had hometown friends like Cris Jacobs and John Kadlecik join us. It just felt even more special than the many many festivals we play around the country because it was with our hometown fans. Twenty seven years for a festival is unbelievable and I think the team should be incredibly proud. Let’s do it again.”

Special thanks to Brad and Tricia Selko who have been coordinating this festival for 27 years. As always, the mix of bands was great giving the audience and band members a chance to see some of their favorites while experiencing new (to them) acts. It was nice to see Brad, Tricia and local promoter/supporter Rich Barnstein going from stage to stage enjoying the day and seeing the appreciation of the crowd for all of their hard work. We are very lucky to have such a great one day music festival within driving range of several major cities.

After PPPP finished playing, the after-party music continued at the Green Turtle with Dirty Grass Players and special guests from Travis Brothership, Samantha Fish, Pigeons and more. We reluctantly knew it was time to call it a night, or more accurately morning, when at 1:15 the lights came up while they were singing “Last Goodbye”. If you want to relive the festival check out Will Urquhart’s stream of the main stage.