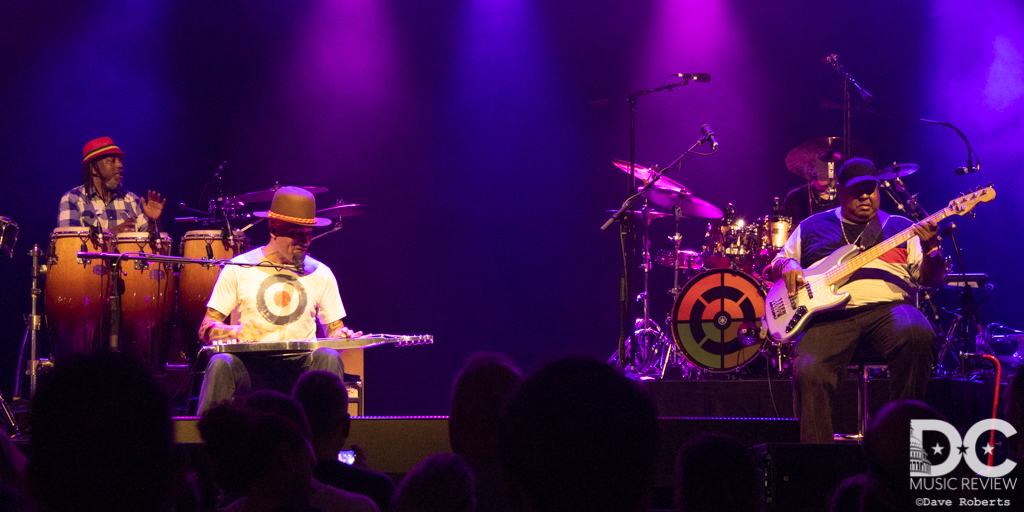 I have to say that 2019 feels like a really good year so far for live music.  Having just seen the Hot August Music Festival at Oregon Ridge Park (headlined by Baltimore’s own Pigeons Playing Ping Pong) and Blues Guitarist Davy Knowles at Long’s Park in Lancaster over the weekend, to say that Ben Harper and the Innocent Criminals and Trombone Shorty and Orleans Avenue on Tuesday, August, 20 was just icing on the cake would be a pinpoint accurate statement.

Opening the show was Nashville singer and resident Jessy Wilson.  Wilson just released her debut album Phase earlier this year, and I’m sure she is happy to be sharing the stage with these bands.  The exposure from this tour is going to be a positive boost for her moving forward and gaining momentum in a national spotlight, and rightly so.  Wilson has a seductively-modern and contemporary-soulful sound as she delivers her music.  Ending her set with a gritty, bump and grind “Clap Your Hands,”  make sure to keep her in your spotlight.

Enjoy photos of Jessy Wilson by our photographer Dave Roberts.

Next up was Troy “Trombone Shorty” Andrews and Orleans Avenue and I just can’t say enough about the energy that they brought to their performance.  Nothing but high octane fuel for this horn-heavy, double-drumming outfit that is nothing short of the complete package.  Comprised of two guitarists, two drummers, two horn players, bass player and two lovely back-up vocalists, and Mark on the trombone and trumpet, this band knows how to bring it.  Very upbeat and aggressive with his manner in keeping the crowd energized, Andrews spends time with each of his band mates, and makes sure that they all have their turn in the spotlight, and rightfully so.  This is one highly-talented group of musicians who love what they do, and they were definitely keeping the Baltimore crowd funky from start to finish.

As gifted as Trombone Shorty is on his horns, he has a lot of talent behind the microphone as well.  Covering that part of the songs enables the rest of the band to focus on their funky beats.  These cats were all over the stage, solos, duets, and jams that tickled your dancing feet  for their entire performance.  Songs such as “Buckjump,” “Fire and Brimstone,” and “No Good Time” made the set that lasted about 75 minutes. I can’t stress enough how intense this show was, how magical this band gels together into one cohesive musical train that just steams down the tracks of togetherness at high speed.  If you have never seen them before and they have been on your radar, make sure to seize your next opportunity because they will keep you coming back for more.

Enjoy photos of Trombone Shorty by our photographer Dave Roberts.

Headlining the bill was Ben Harper & The Innocent Criminals.  Not having seen Harper before, I was a little unsure of the sound his band would bring forward into a live experience.  Expecting a more mellow show, I will admit that I was surprised and very satisfied that his show was exciting and thrilling, yet intricate and delicate.  Spending many of his songs seated at his lap steel guitar, he was able to create a psychedelic and raw sound that brought his blues, folk, reggae, and rock influence through the sound-system straight into my brains’ hearing receptacles for a delicious and spirited  sound.

Opening his set with “Gold,” “Whipping Boy,” and a crowd favorite “Burn One Down,” Harper set the tone for his set.  Harper was able to switch between his lap steels, Taylor acoustic, and Gibson electric in order to achieve the most perfect fit of guitar sound for the moment.  The setlist was an excellent combination of tempo and collective pace of his songs.  One was easily caught adrift within the soulful sounds that Harper & The Innocent Criminals were painting on their musical canvas, a succulent treat that encapsulated the MECU Pavilion crowd.

The impression that I got from Harper throughout his performance is that he is a humble and thankful man, appreciative for the love the fans were sharing with he and his band.  He would not just offer a “Thank You” between his songs, but a heartfelt and sincere gesture that carried his vibe all evening long.  So much so, that during “Walk Away” he even stopped himself mid-song and apologized that his musicianship was not on par for what his fans deserved.  So he recollected himself, and finished the song much to the fans cheering.

One amazing memory from the evening was when Harper was playing “Diamonds on the Inside,” off of the same titled album. He stepped away from the microphone to the front of the stage, silently quieted the crowd as he took on the second verse and chorus a cappella.  Let me tell you it was powerful, it was emotional, and was a true testimony to the talent that Harper has.  He shared that his writing is from his experiences in life, his heart, and that he lives his songs.  Otherwise he wouldn’t feel true in presenting them to his fans as he seeks to be as authentic as possible.

Once again, another great band.  Juan Nelson, on the bass, has been with the band since 1994, and drummer Oliver Charles has been playing with Harper since the same year.  Leon Mobley on percussion, who smiled more times than I can count, has been playing with Harper since 1993.  These guys fed off of each others deepest musical vibes the entire show, and would have little jam sessions sporadically throughout the evening.  Nelson said this is the part of the show when he and Harper went back and forth, exploring their individual spaces and inspiring the next to take their music just one step further.

As storms were within the realm of possibility on Tuesday, the bands did a little shuffling with the leniency of their set changes in order to still share their allotted time of music in case of a needed cancellation.  Thankfully the weather cooperated and the MECU Pavilion was treated to a great show. The talent that shared the stage this evening was off the chart, it was almost like seeing three different shows.  From the modern-soulful sound of Jessy Wilson, to the “in your face” N’awlins jams from Trombone Shorty & Orleans Avenue, to the finely designed songs from Ben Harper & the Innocent Criminals, hopefully all three bands were just as happy to be in Baltimore as the fans were in hosting them.

Enjoy photos of Ben Harper by our photographer Dave Roberts.