In a City Famous for Rallys, The Arkells Newest Album Resonates with DC 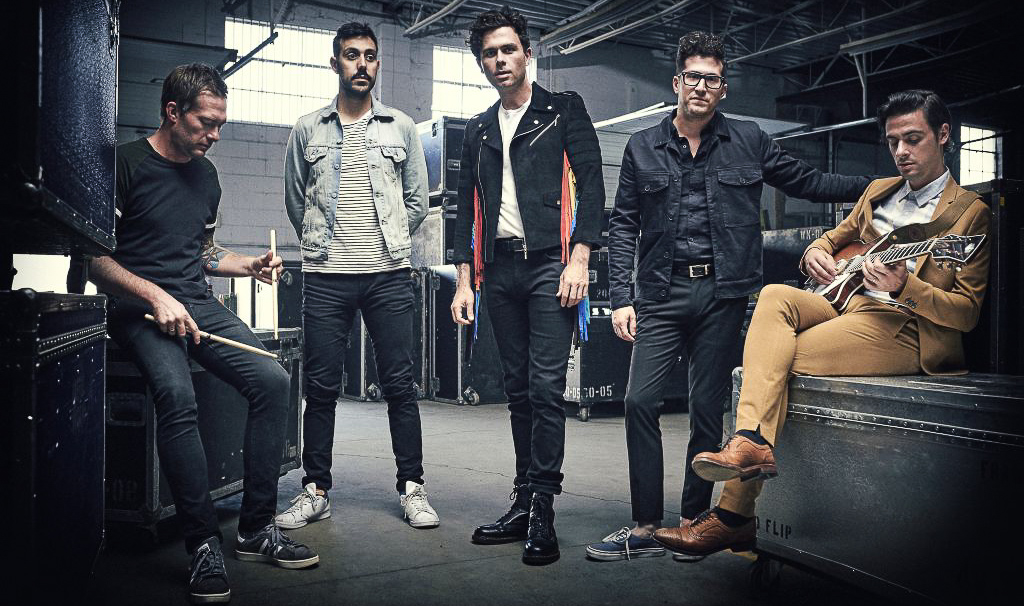 ​Karin McLaughlin: ​So you guys are coming back to DC the very beginning of March and you actually played at U Street (Music Hall) back in 2017.  A lot has changed since then​ - lots to talk about - mainly the fact that you guys just recently put out a new album, Rally Cry​.  Let's touch on the overview and the very stark difference between that with the whole message and feeling of the album as opposed to Morning Report.  I remember reading about Morning Report​ and I related so much to what you guys said about it and how it's almost like the, "What the eff happened last night?!" moment.  Now I want to get into that specifically related to one song, but how about if you can kind of go over what the process and the feeling behind the album in itself.  Then also as a contrast to "Morning Report".

Max Kerman: Yeah, I think all of our records are ​a reflection of the music that we're into that present time.  Also, we're trying to build on what we learned from making the last record and a lot of times we also are not trying to repeat ourselves.    So for instance, Morning Report was 12 songs and there's some more somber moments I think we stretched out a little bit more on those recordings.  ​As result, with Rally Cry, we wanted to do something a little more direct.  We kept it to 10 songs and I think the songs all have a little bit more punch to them.  ​​Rally Cry is a little bit more outward looking as an album. I think there are two more insular songs on on Morning Report.  So yeah, they're different in those ways and like I said, I think it's important that we that we don't repeat ourselves because the recording will become pretty boring if it just felt like we were kind of going down the same road every time.  A lot of the stuff on Rally Cry kind of speaks to me.

KM: Let's talk specifically about "American Screams".  I feel like listening to the lyrics of that song, and where you guys talked about Morning Report overall being that, "What the eff happened last night", I feel like "American Screams" really speaks to that as a morning after Election Day​.  Maybe I read that one wrong, but it has a lot of political undertone to it.​  Kind of like, "You guys made your bed now lay in it",  type of thing. Is there a different story to it or can you tell us the backstory to the song, specifically in regards to that? MK: Yeah, I think you're ​definitely on to something there.  It's a song that is reflecting on the hysterical nature of the conversation that I feel like happens a lot in America, between the various tribes and yes, ​it's a bit of a helpless song. ​ Specifically, ​I'm talking in the second verse about the Vegas shooting and you know​, it says, "Hoping and praying ​didn't change a thing." ​ We love touring America, there's so much excitement.  ​I love the various parts of the country and there's so many great people there, but I also think that​ there's some darker color to America, you know​, and you see it on the side of the highway when you're when you're driving down the interstate. You see these these billboards that are reading ​really like apocalyptic style things like if you don't follow God, you're going to burn in hell, like that kind of shit. ​ That always​ really bummed me out.  I think ​some of our worst instincts come out in those moments.​  So yeah, ​a lot of the songs on the record​ are talking about how you're connected to each other and how we can best live side by side.

KM: Yeah, that's a very interesting point about ​those billboards. ​ It's a lot more prominent down south, not to necessarily point fingers, but I went to school down south and I remember going back to visit one time very recently, and driving by a billboard and it was quoting God.  It was kind of almost like, 'I know God wouldn't say some shit like that' because it was very dark and mean. ​ God would be more uplifting, I think.​ (laughs).  But it's funny that stuff like that really is able to be put up on billboards.

MK: I know - you would think some committee would step in and not allow that kind of thing.

KM: Sadly, I bet it's the committee that's putting it up though.

MK: Yeah, that's true.  Infringement on your free speech or some shit.

​KM: So you talked about​ getting to see different parts of the country and you guys tour quite a bit, you've done a lot. ​Everything from Coachella, Austin City Limits, Shaky Knees, you even perform ​at the NHL Awards.   I saw you made an appearance at the Olympics in ​Korea too. ​ You've also got a lot going on coming up -​let's talk about festivals in general, and ​the energy behind it.  How do you guys feel about being able to, number one, perform your music for fans in such a high energy kind of environment, but also the opportunity to bring your music to ​fans that are there for​ a completely different band that maybe haven't heard of the group​ and you get ​this one shot where it's like, 'All right, ​we're gonna get these folks, we're going to make them fans!' MK: That's exactly how we look at it.​ ​ When you're headlining a show, ​the majority of people are there to see you and when you're opening ​a show,​ there's a good chance that people might have done a little bit of homework​ to check out the openers.  When you're playing a festival, it's a real mixed bag. The way I think about it is, ​you're traveling long distances and​ you miss out on things back home because your job ​takes you to far off places but it's your duty to ​make the most of it​.  We traveled from Toronto to Austin, Texas for a weekend to play ​Austin City Limits​ which we treated as a great privilege and also something we really need to make the most of because if we're not going to be prepared and deliver our best show​, then really, what's the point?  So when it comes to festivals, ​we hope and our mission ha​s been time and time again that we'll make an impression on someone who had never heard of us and then ​they'll come out and see us play the next time we're in their city.

KM: We also talked ​a little bit about the politically charged nature of the new music. Now that you're coming back to DC, are there any protests planned while you're in town that you can participate in?

​MK: No, our ​protest songs are on "Knocking At The Door" and "People's Champ".  "People's Champ" is pretty ​obvious Trump song, so we'll sing that one extra loud (laughs).

KM: Nice. So you've got a lot of notches on your belt as far as ​places you've played and things you've gotten to do.  What's on list that you guys are checking off in 2019? ​

​MK: Yeah, we're doing some UK festivals which is exciting, we've never done those before.  We're going to be in the States the Spring - we're doing Firefly and ​some other things coming our way in terms of festivals.​ I feel like we've been really lucky that we've gotten to experience​ things like Coachella and Bonnaroo and also Lollapalooza and ​I think my new years resolution this year is just to really try not to look too far into the future and just ​make the most of every single day.   I think when you're an entrepreneur like we are, whether you're a musician or a plumber or whatever ​if you think too far into the future you can maybe get overwhelmed ​thinking about what it's gonna look like.  ​ But if you just put in good work every day, things will present themselves that you couldn't even imagine​.  That's been our experience.  Going to the Olympics or opening for other bands or ​playing our big shows, we couldn't have planned any of that.  It's just a matter of just working hard every single day.

KM: Now that we've looked forward, let's ​look back.  We're ​not really still in the New Year celebration time, ​but looking back on it, what would you say are your top three moments of 2018 that you remember?

MK: ​ Going to Korea to play ​for Team Canada, that was definitely​, I felt like a once in a lifetime kind of moment.  We did our own little festival up in Hamilton, where the band is from and Cold War Kids and Bishop Briggs opened up the show​ and there was over 20 thousand people, so that was a crazy, surreal day.   ​Also, I think putting out a new record. We worked on the record​ kind of on and off for about nine months and it came out in October and we're having a blast playing ​the new songs. So I'd say those, those would be the big three.

KM: Is there anything you guys are going to take time to make sure you see or do while you're in DC? ​​

MK:  We always try to make the most of our time in any city and DC is up there with with our favorite places.  It's DC, New York, Boston, Austin, San Francisco, Chicago, we love those ​cities.  ​DC is a great walking town.  Last time we were there was the Fall with St. Lucia and we played at 9:30 Club and I took a jog down to the White House and gave the requisite middle finger to Trump and carried on (laughs). KM: Too funny! ​ Total side note - ​I don't know if it was a national story, because I'm obviously skewed being here, but there was this news story about a woman on her bike and Trump's motorcade was going by and she gave them the finger and someone caught it on camera and she ended up like getting fired for it!

MK: Yeah, I did see that.  Thankfully they couldn't fire me from my job but I am a Canadian, so I'm gonna have to look out and make sure they don't kick me out of the country (laughs).

KM: Max, I want to thank you very much for taking the time and we look very much forward to seeing you guys back here in DC at U Street Music Hall​.

MK: Thank you so much.