Tedeschi Trucks Returns for Two More at the Warner 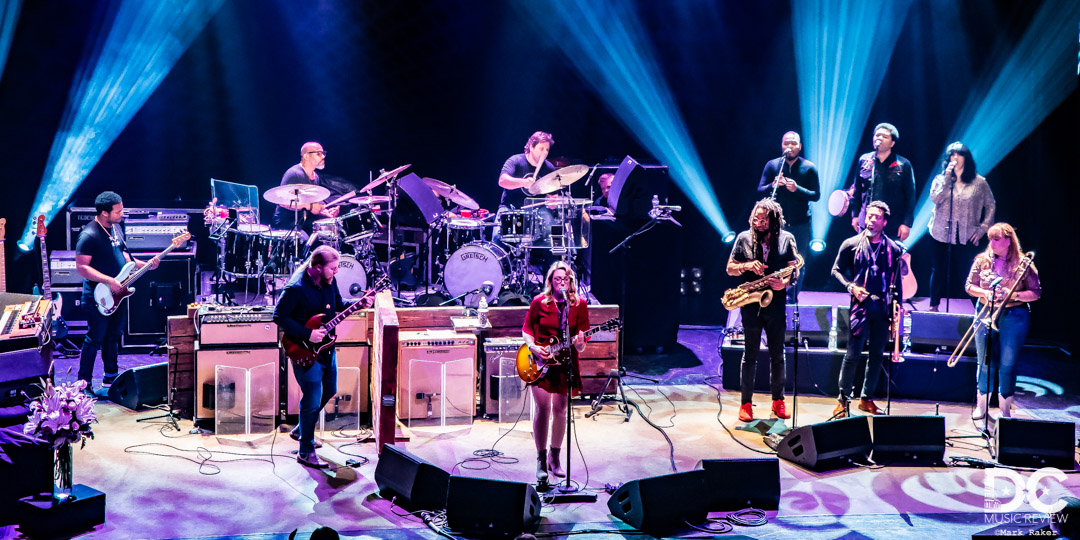 Last Friday night, the Tedeschi Trucks Band continued their DC residency with their third  show of the four night run at the Warner Theater, Washington DC. For the second year now, splitting the four shows into two back-to-back weekends provided for a highly charged and enjoyable soulful release to the mid-winter blues.  Again, this show also continued the run of sold out shows in DC.

With two other shows on the tour tucked between the pair of DC weekends (Hershey PA, 17 Feb, and Brooklyn Academy of Music 20 Feb), the band has been playing through the pain of recently losing long time friend and multi-instrumentalist Kofi Burbridge.  Kofi recently returned to the hospital with complications earlier this year, and the band learned of his passing only just prior to taking the stage last week for the Friday DC show.  He was dearly missed and beautifully represented by a beautiful flower bouquet aptly placed in front of the piano. However the band's stage presence was strong throughout the evening, demonstrating that the therapy of music is not only a way to cope but a way to honor the talent and memories of their close friend and family member.  Their newest album, Signs was also released on Friday and was their first in nearly three years. It was a powerful show, and nothing less was expected or anticipated.  The band always brings it strong, and then some, for all of their DC shows.   Gabe Dixon is on this tour with the band, filling in for Kofi.  The band also recently spit with Tim Lefebvre, and was replaced by Brandon Boone for the winter tour.

The band filled the night with fan favorites throughout the evening from the opener "Don't Let Me Slide" to the double encore.  Of course the TTB Horn Section was as always very solid and tight, with a tremendous brass  jam to bring "Show Me" and the first set to a rousing close.  Their two long sets also included other notables, "Keys to the Highway", "Statesboro Blues", and an extraordinary great horn and Derek jam on "I Want More".  That was a perfect segue into my personal favorite combo, Susan leading on  "Angel From Montgomery" into "Sugaree". Returning to several songs from their new album through the evening, they highlighted "Hard Case", "I'm Gonna Be There", and then for the second encore finished the night with the album's title song, "Signs, High Times". Afterward, the band joined a second capacity crowed at the nearby Hamilton DC venue for the traditional afterparty.  Last week, DC was entertained by local favorite Ron Holloway Band, and this week Jaimoe and Friends took the late center stage.  The most enjoyable evening continued with the band being joined for several songs by Ephraim Owens on the horn, and Kebbi Williams on the sax.  The entire TTB band enjoyed the afterparty, relaxing to some late dinner and have become well known at the Hamilton.

Look forward to band's return to the area this summer,  at Wolf Trap in Vienna, Virginia, 17 July when the Summer Wheels of Soul Tour continues ....and various other summer festivals within reach.  See event and ticket information for the Wolf Trap show below.

Click here to see the setlist for Tedeschi Trucks'  performance at The Warner Theather  on February 22, 2019

Enjoy photos of the Hamilton Afterparty by our photographer Mark Raker of Mark Raker Photography.

Oh, It’s So Heavy: Tedeschi Trucks Band Plays On in Honor of Kofi Burbridge in DC
Read More
About the author