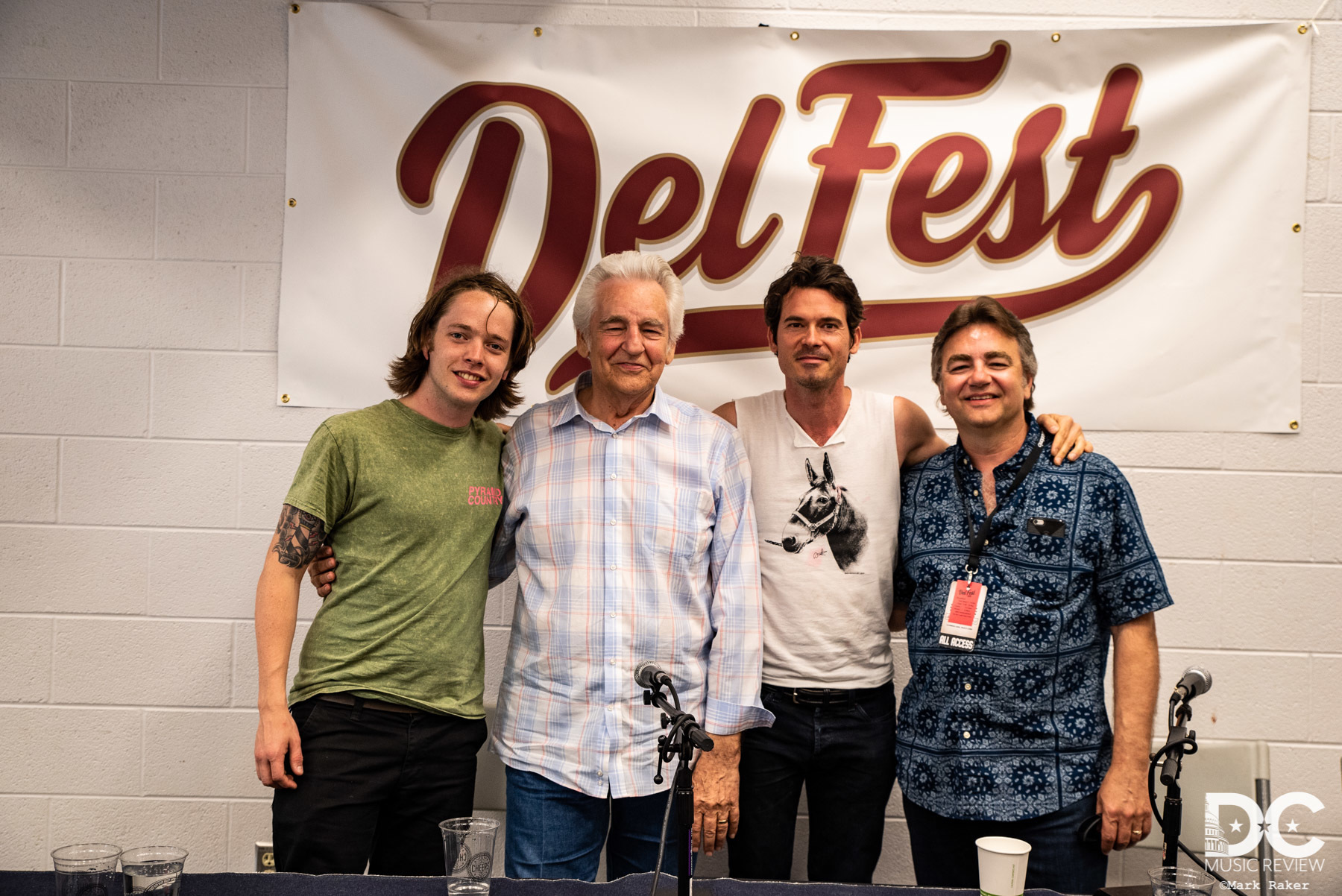 Karin McLaughlin: So we got to sit down with Billy Strings after his first of three shows here at Delfest 11 and last time we talked was right before Charm City (Bluegrass Festival in Baltimore), how was that? Billy Strings: Charm City’s incredible, always. We had a really, really fun set on the main stage there and then right after our set, I ran up the hill there and jumped in and played with Mountain Ride.  Seems to be a lot of that there, you know, there’s some collaboration going on.  I really love the two stages there too.

KM: Nice, and this is DELeven, how many Delfests have you played at?

BS: Three or four, I can’t remember which.

KM: Do you have a favorite that stood out?

BS: Tonight. Our show tonight is going to be the one.  No, last year Bryan Sutton sat in with us and we played “Freeborn Man” and that was really a great moment for me.

KM: Also, you’re doing three sets.  So you had the day today, you’re doing late night tonight and then you have main stage tomorrow.  What do you think it is about late night shows, here at Delfest, I mean people go crazy for late night.  How do you feel playing to a crowd that is, here it is day 3, might be tired or worn out.  I feel like you give them life!  Do you go into that expecting people to be a little tired and you’re getting them to move?

BS: Yeah, I’m always trying to get them to move but I think that the people that are at the late night, they came here to party.  After all the stages are done, there’s a lot of people that still want to hear music.  That’s where we come in because we’re crazy enough to start our set at 1:30 in the morning.  We’re coming into it this time, we were just at Roosterwalk last night, we played with Marcus King and it was a late set.  We played til 2:30 in the morning and then didn’t get to bed til 4 or 5 in the morning and then woke up at 8AM or something and then drove 5 hours and made it here just in time to pretty much meet up with Bryan and get ready for this set and that’s just how we do it.  And so when I walk on stage tonight, I’m probably gonna be just as delirious and tired as all the people in the crowd, you know?  But we’ll get there together!  You know when someone says, ‘I’m getting my second wave’ – that’s a real thing!  Especially with music, music can do it for you.  I know sometimes, I’m getting ready to walk onstage and I’m really tired and I’m just thinking “How the hell am I gonna do this?” but then a couple songs in, the energy just comes – it’s that natural high.  And I have tried that, you know, sometimes I’m like, “Oh my God , I’m so tired, I need to just drink a Red Bull” or whatever – find substances to get you up or down or whatever you gotta do, but really, it doesn’t work like that.  If you just stay kinda sober and clear headed, two songs in, you’re gonna get that, those natural endorphins that you need to get you through the show.  I think, that’s where it is, really.  Just knowing that a couple songs in, you’re gonna find the energy.  It’s funny because some of those nights, I think I’m so tired and we’ve been driving all day and I get on stage and we do it and then at the end of that show, I have so much energy. KM: And then you don’t know where to go (laughs).

BS: Yeah, exactly! Before the show I was falling asleep miserable tired and then after the show, I wanna bounce off the walls!  And then sometimes, you just end up going back to a hotel or something and it’s really hard to come down.

KM: Do you ever venture out here, into camp?  They’re so big on fireside jams at night.

BS: Right.  I haven’t the last couple years just because I’ve been so busy with, you know, if I get to Delfest, I got a set here and a set there and I’m just so busy.  The first couple years that I came, I was in the woods picking with Pappy and some members of Cabinet and those were some really good jams.

KM: Yeah, I think I heard you back there one year.

BS: Yeah, I oughta go around the campsites and pick some more.  That’s where it is too, you know, like I don’t just, I mean I play, whether everyone is there or not and sometimes when you’re at a festival or you’re at a concert you’re working at, you forget to go out and party with the people and just hang and play music, just to play music.

KM: Yeah, there’s a lot of that going on out in the woods.  Everywhere really, I think people were outside my tent by the fire playing til like 4AM last night.

KM: Yeah, good music to fall asleep to for sure

BS: Yeah, I love that.  That’s what I used to do and still do when I get the chance.

KM: You also mentioned, what you liked about Charm City were some of the collaborations.  That happens a lot here. Billy Strings earlier this year at The Anthem in Washington, DC

KM: I’m gonna ask and I don’t expect you to be able to tell me but I gotta ask anyways.  Is there anyone special that is going to be coming onstage tonight with you for the late night set?

KM: (laughs) That’s fine, I understand, just had to ask.  So after this – where you heading?  You said the last time we talked that you’re touring like 220 days out of the year.

BS: Yeah, I think like 200 shows a year is about what we’re doing.  Where are we heading after this?  That’s a good question….

KM: Do you even know (laughs)?

BS: After this, I know we’re going to John Hartford Memorial Festival soon and I know that Greensky Bluegrass has their first Camp Greensky Music Festival up in Michigan where I’m from so I’m gonna go home and go party with my boys and check out their party for the first time ever.  They got a lot of great bands playing up there.  It’s gonna be sweet.

KM: Yeah, that one sounds awesome.  Well, that’s about all I’ve got.  I really appreciate you taking the time.  I’m super excited about the late night tonight, I’m saving all my energy for it.

BS: I’m trying to do the same thing.

Side note: Billy murdered his late night set and the entire place went nuts – his energy is unreal and if you ever get the chance to see him, it’s an absolute must!!!