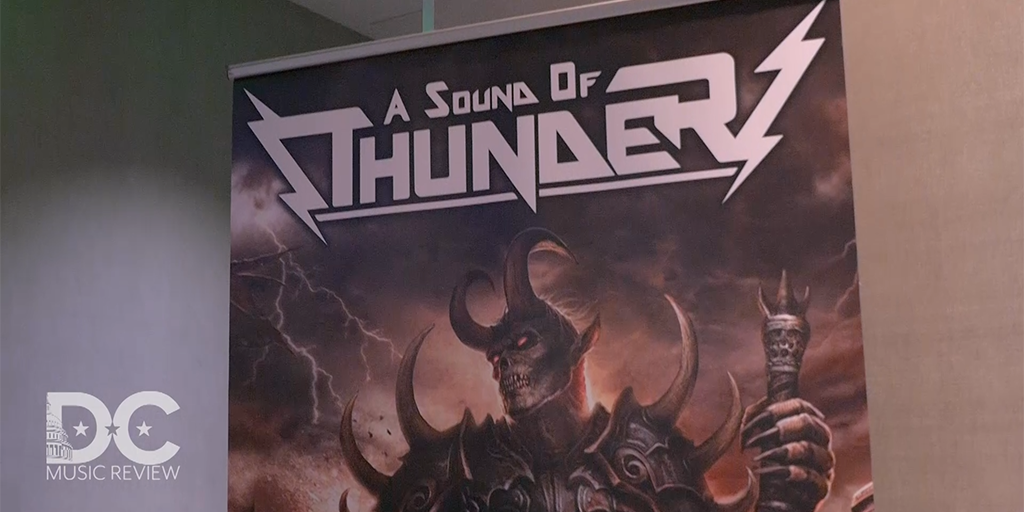 If you’re a heavy metal fan in the DC/Metro Area who hasn’t heard of A Sound of Thunder, then shame on you. Based primarily in Northern Virginia, the band has been prolific in terms of output over the last seven years, with six full albums of original material, as well as a cover album, and a themed EP, based on the Valiant Comics character Doctor Mirage (their fifth album, Tales from the Deadside was based on Valiant’s Shadowman). Their fans, known as the “Legion of Thunder”, have been fiercely loyal throughout the years, and the band has always been appreciative. Recently, A Sound of Thunder, which consists of lead singer Nina Osegeuda, guitarist Josh Schwartz, bassist Jesse Keen, and drummer Chris Haren, held a release party for the animated video for the title track off of their latest album, aptly titled It Was Metal, and there were several fans who came to the Angelika in Fairfax VA., wearing t-shirts and jerseys in support of the band. After a screening of all of the band’s videos to date, fans were treated to “It Was Metal”, an 8-minute animated epic produced by Loogaroo, that featured the members of A Sound of Thunder facing off against an unruly dragon . . . a dragon voiced by comedian Brian Posehn. As with their previous animated music video, “Udoroth”, the band’s producer Kevin Gutierrez is prominently featured before being mutilated for a laugh, and even Nina’s husband, Will Austin, provides the voice of Udoroth himself, who also makes an appearance. Given the band’s previous successes with Kickstarter, I can only imagine how quickly they could raise funds for a full animated movie (seriously though, guys, you need to do it!).

After the screening, the band met with fans, taking pictures, and handing out Kickstarter rewards for their latest campaign, which included a signed CD copy of the new album, as well as the aforementioned Doctor Mirage EP, Second Lives. But the big reward for most fans had to be the It Was Metal graphic novel, featuring the talents of comic creators like Barry Kitson, Roberto De La Torre, Steve Niles, and many more!

Naturally, I had to get the band to talk about their latest project, their process for creating music, and their evolution as a band.

JOSH SCHWARTZ: We’re A Sound of Thunder, we’re a heavy metal band from Northern Virginia, and we’re here at the Mosaic in Fairfax, VA, and we just premiered the video, a new animated adventure  . . . Brian Posehn stars in it as one of the characters, and yeah, [It Was Metal], it’s a heavy metal album by a heavy metal band!

NINA OSEGUEDA:  So, the new album is called “It Was Metal”, and it’s us going back to our roots; it’s us writing music that inspires us, all of our influences, you’ll find on this album. And then we decided to do a graphic novel to accompany the album, so every single song has a short story that is in our comic book, and it’s all original. We have great artists, there are great writers, and we’re just excited to show it to everybody.

JESSE KEEN: Coming off of a retrospective of the videos we’ve done in the past six years is super weird, because it lays bare the stylistic growth of the band, both in the videos and in the music. . . . I got to watch my hair grow over the course of 40 minutes, which is also weird. But I feel like we’ve crossed a new threshold with the latest record that I’m really proud of.

CHRIS HAREN: The genesis of it was kind of like all our other albums. We jam a lot, and we record a lot of our jams, and those become ideas, concrete ideas, for each of the songs. And we, all four, enjoy that process. And so, as the songs start taking shape, we want to try to make sure that, number one, we enjoy them, and number two, we want each of them to be a good . . . individual presentation. And collectively, we have to ask ourselves, what are they presenting to the public. And “It Was Metal” was/is one of those. . . .one of our CDs that really stands out, at least to all of us, I think. It certainly is to me, as one that even more so was . . . we all kind of spread our wings, so to speak. And I know me individually, as a drummer, I really wanted to make sure that I “made some statements”, if you will, but in the context of each of the songs. And so, we’re really happy with it. We’re all very happy with the way it turned out.

A Sound of Thunder will be performing an album release show at Ram’s Head in Baltimore, MD, on August 4th, 2018.

Make sure to get your tickets!

Originally from Montreal, Canada, Kayode has lived in the DC/Metro area for most of his life. Kayode has spent years in video production, livestreaming, filmmaking, and audio productions. Kayode has considered himself to be creative and a storyteller. Kayode has had the chance to produce and coordinate the recording of large-scale events for throughout Washington DC. You will see Kayode's storytelling through his multimedia contributions to DC Music Review.