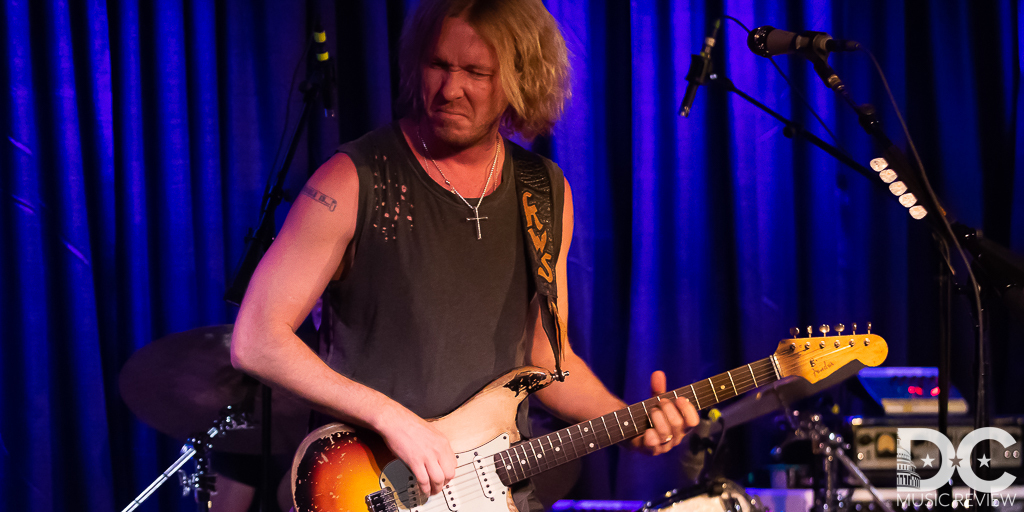 The Kenny Wayne Shepherd Band brought their guitar-driven blues-rock to the Rams Head On Stage in Annapolis on July 29 & 30, for a two-night run of memorable performances. The Kenny Wayne Shepherd Band tore into the blues music scene back in 1995 with the release of Ledbetter Heights. With the immediate success of his album, Kenny Wayne began his musical journey that has led him down many different roads playing and recording with a variety of artists and musical influences. Kenny started playing guitar at a very early age and has always kept a strong foundation in the blues.

Backed by an incredibly talented band, Noah Hunt has been singing with Kenny since the 1997 release of Trouble Is, which features the band’s signature song “Blue on Black.” Chris Layton, from Stevie Ray Vaughn’s Double Trouble, is playing the drums, veteran piano and Hammond player from New Orleans, Joe Krown, and Scott Nelson from Austin, TX helping keep the rhythm on the bass.

From the opening notes of “In 2 Deep” on Sunday evening, this band presented a very focused purpose - to tear the roof off the house. While providing the audience an excellent night of live music, every song, whether it was a rock driven version of “Baby Got Gone,” or a slow, intricate love induced “Hard Lesson Learned,” brought a vibe that was entwined between the musicians and the audience all evening long.

Having played this year’s Chesapeake Bay Blues Festival in Annapolis back in May, this is a return to the area that the band seemingly looks forward to. Kenny said that the band only does several small venue intimate showings throughout the country and that the Rams Head On Stage is one of them. And it’s understandable why - because this venue has such a close-up, intimate feeling that provides such a cool experience for not only the fans but for the band as well.

Kenny and his band played five songs off of their most recent release Lay It On Down (2017). This is such a strong album bringing with it many different musical influences and styles that is engaging all the way through. It’s cool to hear such a variety of blues-influenced rock and boogie that continues to push boundaries all the while staying fresh within the scene.

It was enlightening how Hunt and Shepherd traded off lead vocals for the evening. It’s interesting because you can almost sense that a song has a certain sound for Hunt to sing and the same thing for Kenny Wayne; bottom line being that both of these guys have the talent to spare. Kenny definitely shined while leading a great Texas-style blues song called “Down For Love.” There was plenty of time over the course of the evening for Kenny to let his guitar skills amaze the crowd just because he is that good. But of course, he can’t do it by himself and his band was definitely right there with him. “Heat of the Sun” was a very intense, jaw-dropping jam which was reminiscent of some classic Robin Trower style songs. From the opening guitar solo, it wasn’t long before that great Hammond sound joined in with the acoustic guitar that led this song into several realms of musical exploration. Such a simple guiding guitar riff ends up ascending towards Fender heaven as Kenny Wayne just lights up his favorite 1961 Stratocaster. This song starts out very mellow, very lightly detailed but winds up just roaring into such a stellar performance by Kenny Wayne that this song got a well-deserved standing ovation from the audience who were just blown away.

Not shying away from his roots and beginnings, Kenny Wayne shared the song that introduced his band to the world, “Deja Voodoo.” This song offers the classic Kenny Wayne Shepherd sound that we have been enjoying for well over 20 years now. And as previously mentioned, the band likes to stay rooted in the blues. Noah asks who is ready for a blues song and offers up his interpretation of the blues, how the music is for everybody, young or old, man or woman, black or white. “Let me step aside and let these boys play the blues,” he said, and that’s exactly what transpired with the 2014 song “You Done Lost Your Good Thing Now.”

The Kenny Wayne Shepherd band doesn't show up with many gimmicks, they show up to play. They seem to enjoy highlighting the music and sharing their joys and passion in life through their style and interpretation of the musical genre they have been pouring their hearts into for so many years. Ending the show with “Blue on Black” and into Jimi Hendrix’s “Voodoo Child (Slight Return),” the Kenny Wayne Shepherd Band brought the house to its feet and hollering for more. Lucky for some fans, there would be a second night of music on Monday, but for those who were only able to share this one night, believe me, it was a glorious night to see this caliber of musicians in this close-up and intimate environment.

To learn more about Kenny Wayne Shepherd or know where and when he and his band are performing next, please see his Website or Facebook Page.