Kimbra Brings Love and Conviction to DC’s Sixth & I 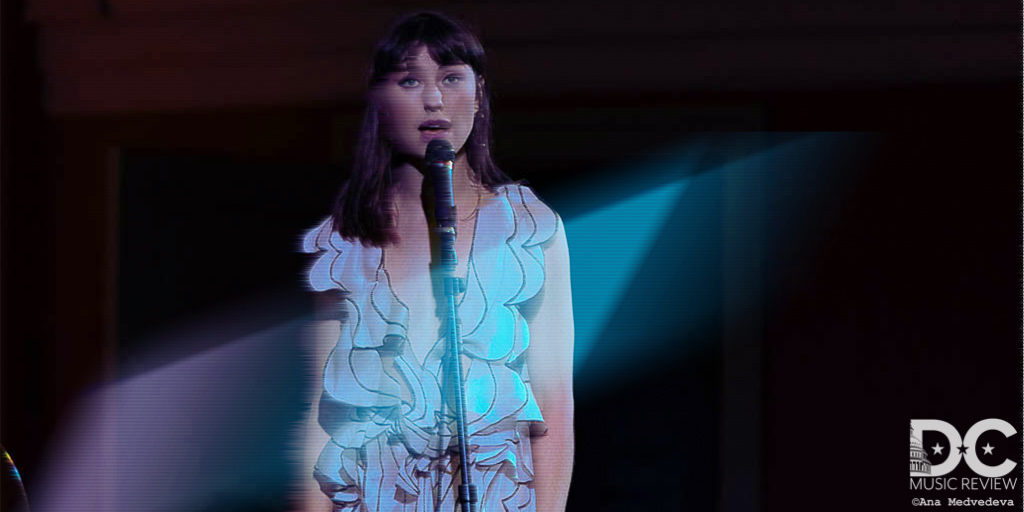 Kimbra is love and conviction. That was the takeaway from this momentous, heartfelt show.

I, like many, first heard of her Kimbra in 2012 when she was featured in Gotye’s hit song “Somebody That I Used To Know for which she won two Grammy awards. Since her 2011 release of Vows, she has put out two other albums The Golden Echo (2014) and this year’s Primal Heart. This was my first time seeing this New Zealand artist live, and judging by the ardor of her fan-base walking into Sixth & I, I was in for a night of something special. Many shows at Sixth & I, a historic synagogue in the heart of DC, can feel like a spiritual experience simply by being in that space. It was the perfect setting for this both full-bodied and bare-boned show, with the impeccable musicians Spencer Zahn (upright bass) and Zach Tenorio-Miller (keys) joining Kimbra on stage. The mix, the reverb, shape of the room, her ability to fill it, all allowed Kimbra’s out of this world vocals to shimmer.

Kimbra entered the stage in a glowing white organza-style origami dress, platform shoes, and her signature Cleopatra hair which is only important to know because her presence was visually stunning.

She counted in her band and dove deeply into “The Magic Hour” which was a jazzy “talk-to-me-like-I-know-you” sister song. It felt having a conversation with your best friend on a stoop in the summer and was a swingy way to start off the night.

Next Kimbra said hello to DC, acknowledged it was great to be back in this “sacred space” and launched into “Plain Gold Ring,” a Nina Simone cover that she intuited beautifully, the bass holding her foundation and her larger than life voice perfectly humbled with an earnest homage. In “The Good War,” Kimbra continued to connect deeply with the audience and then launched into “Everybody Knows” which was one of the high points of the show. Here, she was so many things at once – a jazz singer, a mime, an empath – and she conveyed this song with every part of her body and voice, in syncopated movements, chord dissonance, and ghostly whispers.

She talked a bit about her next song, “Hi Def Distance Romance” which is about the challenges of being in a long distance relationship at a time where we are so connected and yet so far removed because of technology. Then she reached what was the second high point of the night in the song, “Withdraw,” which was a rousing, impassioned performance that felt like she was summoning the voices of Minnie Riperton, Barbra Streisand, Ella Fitzgerald, and Liza Minnelli, bringing it all to a culmination in her confident yet connected performance. Before launching into her next song, Kimbra spoke of death, why we congregate, which was a perfect segway to “Waltz Me to the Grave.” It started as expected in ¾ time then fell into a wonderfully strange, slightly Radiohead-esque hybrid jazz song that dissolved into something like walking into a dark unknown. It was like a sexy rendering of Kate Bush and Tim Burton dancing at the would-be wedding of Eurydice and Orpheus (had he not turned around). No joke, that’s what it felt like. Maybe add a little Laurie Anderson in there for good measure.

The next song, “Old Flame,” was reminiscent of an old jazz standard where Kimbra demonstrated total control of her powerful instrument as her vocals perfectly danced all over the room. At one point she invited the audience to sing along and support the low end while she went high, which sounded simply amazing in a congregation. She then went into “Black Sky” which was more reflective, personal, and quiet, with her hands mimicking her own choral conductor or a painter looking in a mirror, painting a self-portrait.

In “Rescue Him,” Kimbra was all about engagement with the musicians and the audience, blocking out the lights to see people, and at one point speaking the lyrics in a style much like Alicia Keys, another strong woman she was perhaps honoring in her performance. The third high point of the night came during the next song “Past Love” where Kimbra weaved a story with her vocals and soulful lyrics, singing...

I used to live clinging to his elbows

Though I try to shake the lie

Of every faint glow

...with gravitas and matter, which was a stellar penultimate finish to this moving night. Her final song, “Version of Me” was about wanting to be a better person for the person you love and was at moment’s reminiscent of Ravel’s Bolero in its build. Naturally, the musicians were met with a standing ovation and came back for a fantastic encore with “Cameo Lover,” which was a definite crowd pleaser. Kimbra ended the night on her knees, as close to the audience as she could get, with the audience singing along with her heartbeat vocals and lyrics to “open up your heart,” a perfect finale to an emotionally spirited night of art and love.

Overall, the entire show was one highlight after another with a few extra knockout moments. Kimbra was all at once connected, intimate, accessible and larger than life. And as Kimbra gave a nod to many other legendary women artists throughout her performance, she was still signature Kimbra, her own person, her own message, with her very distinctive and important voice for the next generation.

Click here to see the setlist for Kimbra's performance at Sixth & I on December 6, 2018

7. Waltz Me To The Grave