MAE in the Fall: Giving Thanks for Friends, Family, and New Albums

Concert Reviews
On Our Radar
By Sean Chagnon / November 30, 2018 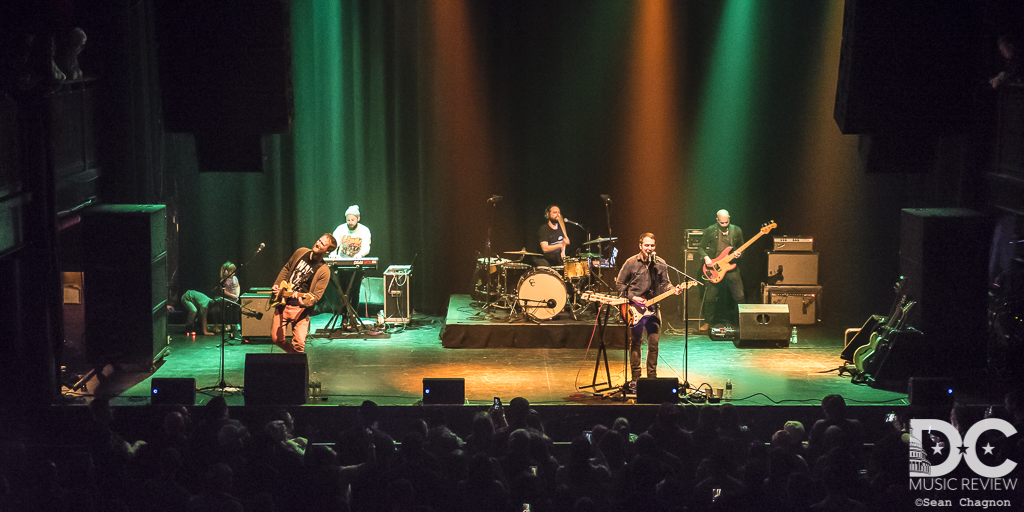 Thanksgiving is a holiday to spend time with family, eat too much, and get in a little partying in with those out of town friends that you may not get to see often. This holiday was all of the above for the guys from mae plus the added bonus of playing a hometown show one week before their new album, Multisensory Aesthetic Experience, is released at a spot that was voted the best venue in the country. The band has come a long way from their humble beginnings playing small rooms in the Hampton Roads area. Talking with fans in the crowd, it was evident that they were excited to see the band again and one could hear a sense of pride that their friends and neighbors have graduated from traveling down the road to play a gig to a few dozen folks to traveling to different continents and playing for thousands. The proceedings began with Loyals, a band from Nashville, Tennessee. When one hears Nashville, country music is usually the first genre to come to mind, but these guys are anything but that. At first listen, their music could be easily be filed in the pop genre, but their ability to blend in indie rock and R&B influences ensures variety throughout their catalog and will keep them from disappearing into the crowd. They take the stage with an energy that spreads to the crowd quickly with their bassist leading that charge by leaving the ground more times than a basketball player does in a game. Frontman Dane Allen's voice really shined in the slower songs where he had the opportunity to belt out the lyrics and guitarist Andrew Gomez's harmonious licks made for a great combination to open the night. OK MAYDAY was second on the bill. The Virginia Beach quartet may not be well known by name, but their songwriting ability has put them on the radar of big names in the music industry including J. Cole whose song “Sparks Will Fly” was co-penned by members of the band. Their sound is combination of catchy radio tunes and 80’s synth pop which has a Coldplay meets Depeche Mode feel. Singer David Bollman is not one to stand still during his set and never stayed in one spot too long while feeding his energy back into the crowd. OK MAYDAY was a solid addition to the night and primed the crowd for local favorites mae. While attending Norfolk’s Old Dominion University, drummer Jacob Marshall was introduced to the concept of aesthetic theory: the study of emotion, perception, sensation, and meaning of music. Jacob and members Zach Gehring and Dave Elkins have taken this idea and applied it to their band mae. Their forthcoming album, Multisensory Aesthetic Experience, is the spelled out version of their acronym name. Formed in 2001 in Norfolk, Virginia, the band began writing songs and released their first album in 2003. Despite a three year hiatus, and some original members parting ways, the band has maintained the solid fanbase and has continued to write music that lives up to their name. With a sound that can be spacey and ambient one minute, and borderline headbanging indie rock the next, it’s not easy to put these guys in a box. They covered both extremes and everything in between at their Black Friday show. The crowd was treated to old favorites and cuts off the soon to be released album that hadn’t been heard by most in the building. It was truly a hometown family and friends event with former bassist Mark Padgett joining the band for a song and spouses and kids in the crowd and on stage. The band finished with a three song acoustic encore featuring Elkins, Gehring, and Marshall to wrap up the night.

With the release of the new album on November 30, mae will be embarking on a west coast tour followed by shows in Hawaii and Japan. Give this unique band’s music a spin and keep an eye out for future dates, because it’s not just another concert; they truly do put on a multisensory aesthetic experience.

Click here to see the setlist for mae's performance at The NorVa on November 23, 2018 While mae may be a force to be reckoned with in Norfolk and Hamptons Roads region, we recognize that this incredible band is not on everyones radar yet.

Find out more about Mae here: