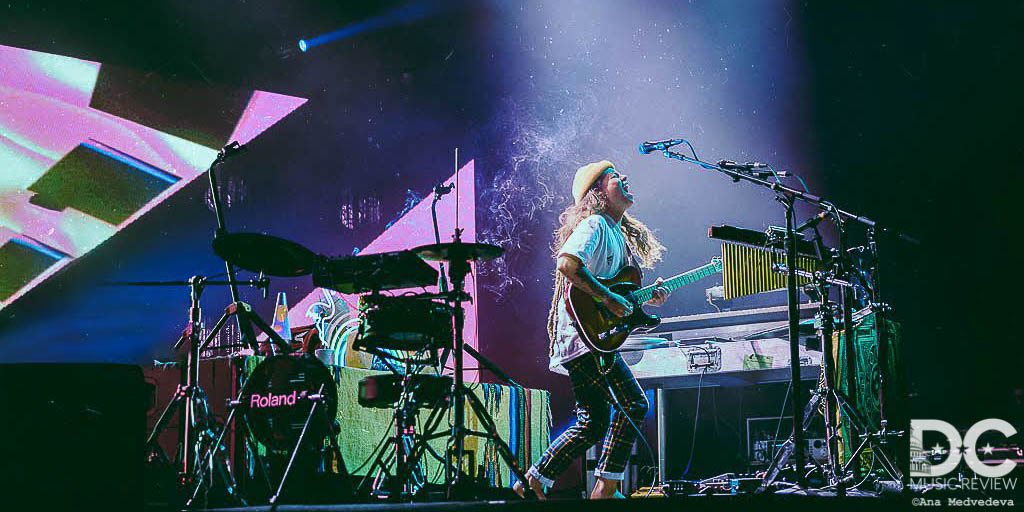 Last Wednesday, November 21, 2018 Tash Sultana enlightened and dazzled the audience at The Anthem with a set that lasted nearly three hours. Playing multiple instruments throughout the evening, the one-person band that is Tash Sultana absolutely slayed.

As Tash’s stage was being set up a mystical aesthetic was slowly starting to build around the musical equipment, featuring items such as a crystal ball, a Himalayan salt lamp, a Maneki Neko, a few neon figures and a burning incense. On the backdrop a pair of blue cartoon eye like slits blinked, gazing out at the audience from the screen—the same eyes featured on the newly released album Flow State. As the barefooted artist walked out on stage, there was a palpable vibe of curiosity and excitement in the audience. Everyone was cheering and applauding, and throughout the evening, whenever Tash would pick up the electric guitar or walk over to the mic after a break the audience would roar.

After playing “Big Smoke,” Tash, who identifies as non-binary, addressed the audience in true Australian candor,

“I say this at every show, but if you’re homophobic, then get the f*** out! I mean it get the f*** out,” and no one left, but everyone did look around. Continuing on, Tash explained the reason for this is because of an unpleasant encounter with someone at a show, who she learned was named,

“Stu Magoo. What the f*** kind of name is that?!” Later the entire audience would be shouting “F*** you Stu Magoo,” and flipping the bird to wherever Stu is now.

When Tash played, “Jungle,” the song that brought renown through a 2016 home video, the audience went wild, with every person in the room moving and singing when they could.

"All those kids in high school that told me I’d never make it...I hope you hear this."

While this song was absolutely phenomenal and enough reason for some to attend, what is particularly impressive is how far Tash has come since then. In addition to looping with an electric guitar during the set, the artist played the horn, beatboxed with a fife, played the keys, drum pads and classical guitar. Another particularly memorable song was a song that was performed for the first night, this night on the acoustic guitar called, “F*** You.” Tash explains it was written for, “all those kids in high school that told me I’d never make it...I hope you hear this.” The audience vehemently sang along with the chorus, “f*** you, hey.”

After seeing Tash live, one will understand their music better—watching the emotions splash over the artist’s face with every chord, note, and beat was otherworldly.

Tash’s entire being was put into the music being performed, from getting down on their knees for ethereal guitar solos to head banging so hard their hat fell off.  We were graced with two hours and 45 minutes of the Tash Sultana Experience.