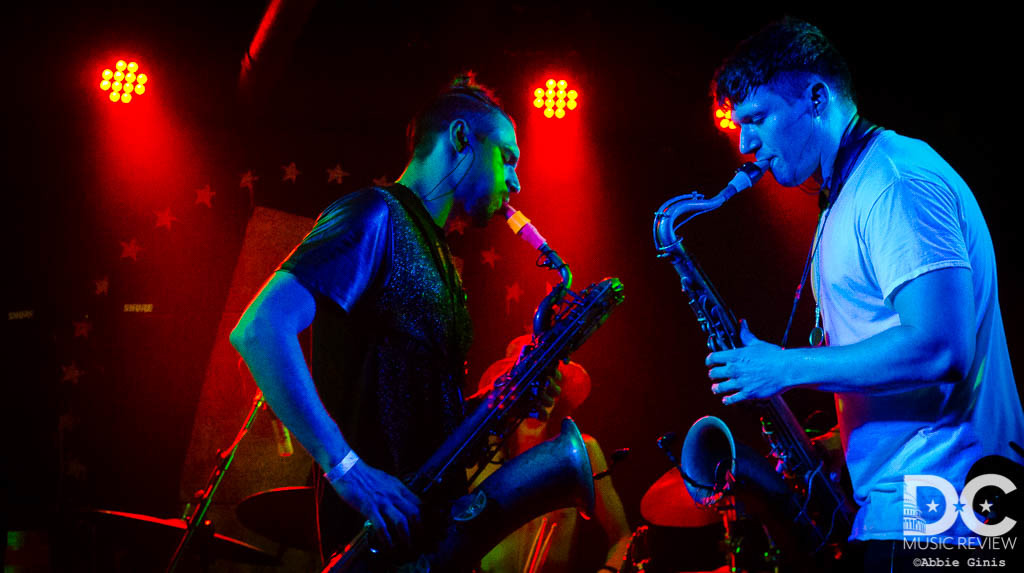 “No one makes music like Moon Hooch” is typically how live reviews of Moon Hooch begin. Classically trained musicians, the boys of Moon Hooch — James Muschler (drums), Mike Wilbur (sax), and Wenzl McGowen (sax) — met at The New School for Jazz and Contemporary Music in New York. While at the briefest glance, Moon Hooch may look like a jazz trio, they are anything but. Perhaps they are jazz musicians who don’t directly play jazz, but rather jazz musicians who play electronic music akin to that of what you’d hear at a rave (but a rave with brilliantly crafted music), with elements of metal and hip-hop. Openers Nathan Paul & The Admirables set the tone for the night with their funky and jazzy tunes that got everyone grooving immediately. With a guitar that played like a sax and a sax that at times played like a guitar, The Admirables played with a unique flair that was a perfect accompaniment for Moon Hooch’s more electronic-ish set.

After The Admirables’ too short set, Moon Hooch percussionist James Muschler shed his shirt immediately before clamoring behind the drum set adorned with a wide-mouthed dinosaur gnawing on his drum sticks. The others weren’t too far behind, with the set kicking off relatively tamely with the spotlight on Wilbur. When McGowen joined shortly after, the night spiraled into a nonstop whirlwind of colors and sounds, with song after song melting into the other, the band rarely taking a moment to come up for air. The trio make music for the mind and body, with beats that make you want to both close your eyes and absorb, while your body simultaneously bounces and jumps (almost uncontrollably), which makes for a clumsy combination. As a result, the audience found a way to move as one, in sync with each other and with the music, forming a cohesive wave of motion.

Because lyrics were few and far between, and the ones you could here were garbled by synth and autotune, people found their own ways to sing along to the often wordless beats. Making up their own words or simply scatting along, the audience cleverly integrated themselves into the show. Moon Hooch aren’t afraid to experiment or get weird with their style and music. Whether that meant attaching a massive traffic cone to the end of the sax in order to deepen and elongate the sound, playing a four-minute long solo without coming up for air, or closing the show out with a call for donations to plant trees, everything about the band was unique and eye/ear-catching.

Moon Hooch are a live act that transcend reality, whose energy never wavered, but rather swelled as the night progressed. When they play, they play hard — saliva and sweat dripping profusely from the bodies of both man and sax.

It’s nearly impossible to sum up Moon Hooch, but if you ever have a chance to see them, do not pass it up.