Travelin’ Mccourys at The Hamilton 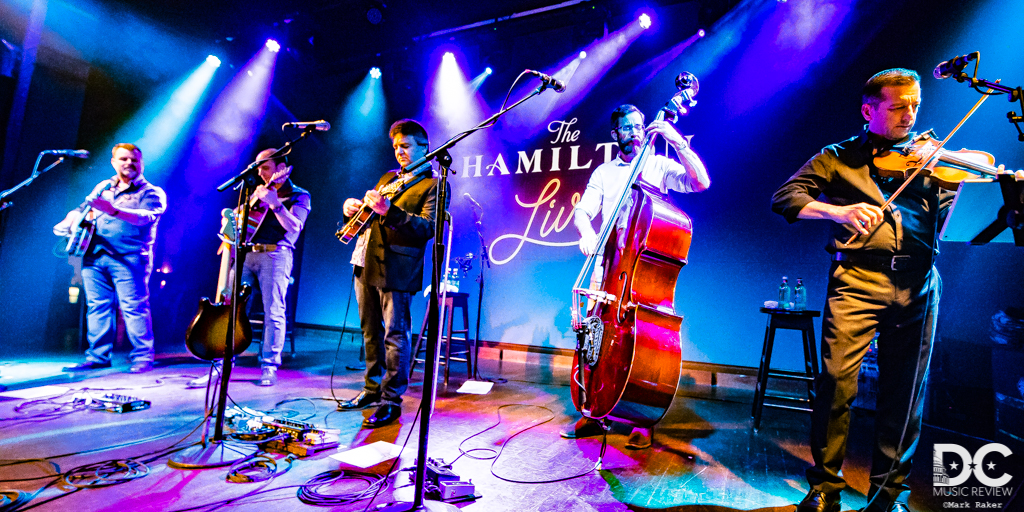 ​The Travelin' McCourys returned to The Hamilton Friday night, a place they ​have shined at before ​and with a strong showing by openers The Dirty Grass Players, ​the venue was ready for a night of family fun and bluegrass.   Baltimore based Dirty Grass charmed attendees with an extended version of The Seldom Scene's "I Know You Rider" as well as some great originals and closed out with a song that was guaranteed to be stuck in almost everyone's head for the remainder of the night, "John Jacob Jingleheimer Schmidt".  The band worked the crowd up to just the right level for brothers Ronnie and Rob as well as the three other superstar members: Jason, Alan and Cody to take the stage.  It's worthy to note that every member of The Travelin' McCourys have been awarded an International Bluegrass Music Association title as best at each of their respective instruments.  On top of that fact, the band most recently, as a collective entity, was awarded the IBMA Instrumental Group of the Year award in 2018.

*(Read Rob's account of the acceptance speech in his interview with Karin McLaughlin, here) ​Playing from what Ronnie noted was their 'latest and only album'  the ​fivesome show cased why each of them deserved the awards that they have ​been given.   Solos by each member of the band were amazingly hypnotizing and it's easy to see how their awards were earned.  Fans and friends were delighted to spend a Friday night with the Travelers dancing their way into the weekend.  Attendees got to hear a variety of originals and covers such as their version of "Let Her Go" that consistently proves to be better than the original, in my opinion.

Before kicking off on a run of Grateful Dead covers, Ronnie thought it worth noting that a few of the songs hadn't been covered since the days of Grateful Ball, a tour that was done with the Jeff Austin Band and had made a stop at the venue back in 2016.  During this part of the show was when we got to experience Ronnie's Mandocaster Electric Mandolin.  Telling a story about it, as they were traveling for a show, they just so happen to run into Sam Bush in the airport.  Ronnie's carry on was the electric mandolin and Sam inquired ​and was absolutely amazed by it, but debated the 'official' name.  No matter, stated fiddle player Jason Carter, the question is 'can you ​cast with the caster?' to which​ Rob's response was, "No, you can't fish with it but you can melt faces with it, just watch."   ​Ronnie also mentioned that he was in the city where he had first met Jerry Garcia, 'a truly wonderful man'.   An extended version of the hit "Deal Go Down" proved to be, what I think, was the highlight of the tribute to the Dead and proved that the instrument could indeed do what Rob had earlier stated.  ​​​​ The crowd ranged from what appeared to be some ​who were barely old enough to drink alcohol, to those that were around when you could still drink in the city at age eighteen.  A mix of friends, family and fans that have become family over the years according to one member of the band, the fellas weren't far from their original home of York County, Pennsylvania.  After having a huge announcement about one of the headliners for another highly anticipated year of Delfest, Rob noted that tickets went on sale the day before and that they set a record for the amount of early-bird tickets purchased.  Asking if anyone in the crowd had ever been to the festival, a true family affair for the McCoury brothers, about sixty percent of the crowd could be heard cheering.  There was also evidence that the crowd was obviously fans of the festival as there were several Delfest shirts​ displaying lineups from years ago to the most recent iteration of it as well as a shirt, that I too own, stating "Delfest is my happy place".

Wrapping the show with a two song encore, fans left quite satisfied with the night of bluegrass and tribute to the Dead, to anxiously await more announcements and a return to Cumberland for another Memorial Day weekend!   Check out the photos and recording below!

Rob McCoury on Music, Being a McCoury and Travelin’ Like One
Read More
About the author