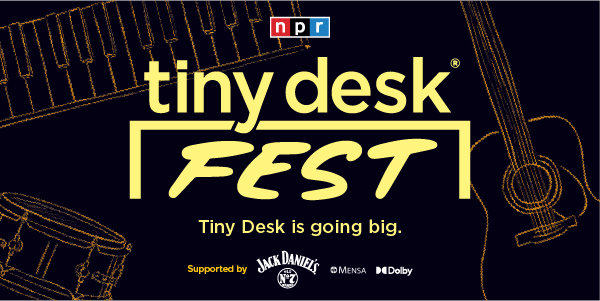 For years, National Public Radio has been bringing us music gold via their Washington, D.C. offices with Tiny Desk Concerts.  This year, Tiny Desk is going big and bringing a four-day festival series to the public via ticketed events and even an opportunity to live stream the concerts for those that weren't lucky enough to snag one of the limited seats.

Boasting a list of artists that is incomparable, Tiny Desks Concerts were born out of an idea created at South by Southwest Music and Arts Festival and now eleven years later have put together over 900 shows with a wide variety of stars as well as up and coming artists, averaging about 125 shows a year. ​Talking with Lauren Onkey, Senior Director for NPR Music, she explained that "it came out of that desire to give artists a platform to really showcase what they can do and really be heard in that way," after one of the performers some members of the team tried to see at SXSW was incredibly difficult to enjoy in a crowded, loud bar.  Afterwards, reps from NPR were talking to the artist and mentioned that they thought she should just 'come up to the offices and play at the desk' and that is where the series was born.

​Featuring everything from jazz and classic hip-hop to Broadway musicals and even the characters from Sesame Street in their history of the shows, NPR has curated a four night long event that will feature a different genre of music each evening.  While the artists remain a secret until the night of, the team put a lot of thought into who they wanted to make a part of the event. ​Normally only open to employee of NPR and their guests, this opens the offices and opportunity to the general public, they wanted to offer something different.  "That's where it was starting, ​brainstorming around new ideas or with our Tiny Desk community," said Lauren.  "And so it's going to be a really fun experiment to see how that works, right?  To actually come into our offices to see these artists."

As you can imagine, being held in an office definitely limits the amount of people that are able to attend and that translates to tickets for the public being very limited.  Each of the four events sold out as quickly as you might imagine, however fear not, as NPR is doing the extended general public a huge service and live streaming each night of music.  While in-house attendees will be treated to an extra special tidbit in a sit down interview with the artists and a journalist from NPR Music, everyone that wants to will be able to enjoy the music portion as it is happening.

The event kicks off October 28 and lasts four consecutive nights.  Genres that will be highlighted are Hip-Hop, Pop-Rock, Indie-Pop and R&B.  While the concerts will be edited and put online after the fact for anyone to be able to watch whenever they choose, we have a feeling it might be worth tuning in live to catch as I'm expecting nothing short of amazingness. Find out all the details about this exciting event on the NPR Music website here.