Ray LaMontagne and Neko Case Light Up The Anthem 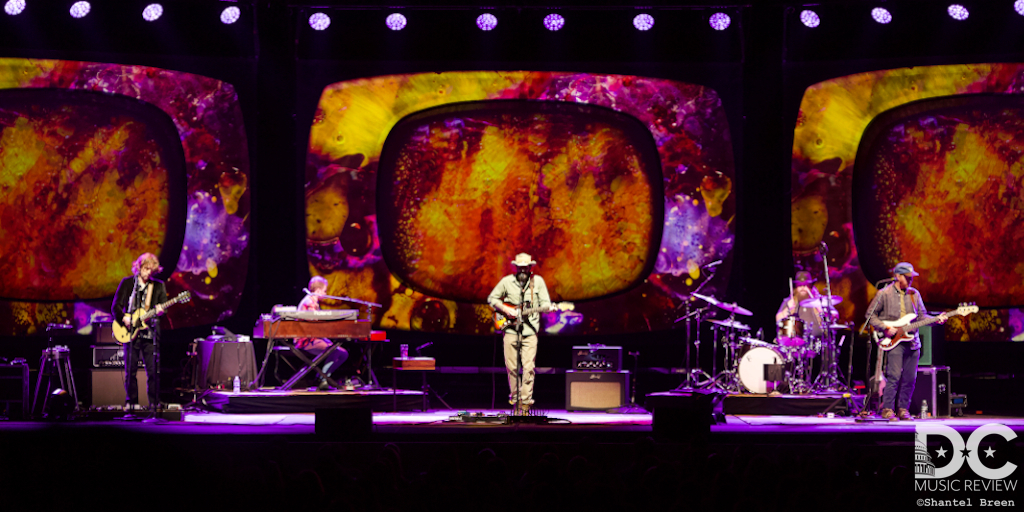 Earlier this year, Ray LaMontagne announced that he would be performing a show at Merriweather Post Pavilion with Neko Case this summer.  I admit to not knowing much of LaMontagne’s material, but I am a big fan of Neko Case.  I was impressed when I saw her perform at The 9:30 Club in 2009 with The New Pornographers.  The idea of enjoying this concert in June at Merriweather excited me.

Very shortly after the tickets went on sale, it was announced that the show was moved to The Anthem.  This made me happy since The Anthem has become my favorite venue in D.C.  However, reading the discussion on the event page, many ticket holders were upset by this venue change.  They claimed that a summer concert such as this was more appropriate for Merriweather’s outdoor experience.  I was not too bothered by the venue change and picked up my own tickets to attend this show at The Anthem. Ray LaMontagne stunned the audience all night with a visual backdrop.

This was my eleventh show this year to date at The Anthem but my first seated show.  The massive floor spaced was neatly lined with chairs all the way back to the soundboard.  The standing areas in the upper level boxes were also lined with chairs. This was definitely a different experience for me.  I arrived early to take advantage of The Anthems happy hour and waited for the venue to fill with people.  The venue was very quiet, even up to minutes before Neko Case took the stage.

The show started promptly at 8 PM as the audience slowly began to fill the seats.  Neko Case took the stage accompanied by 6 additional musicians and welcomed everyone.  She even thanked them for braving the “horrific” DC traffic.  Her set started off strong with “Man”, the single from her 2013 album, The Worse Things Get, the Harder I fight, the Harder I fight, the More I Love You.   This fast-paced song filled The Anthem with powerful guitars as Case rocked out on her guitar solo.

Neko Case performed a 12-song set-list primarily supporting her newest release, Hell-On. The set included the title track, “Hell-On”, as well as, current single, “Bad Luck”.  Highlights of her performance included her howling vocals on “Oracle of the Maritimes” and “Winnie”.  Both of these songs are beautiful ballads with a maritime theme.  She closed out her set with a favorite among fans, “Hold On Hold On”.  Her voice echoed through The Anthem and she received a standing ovation from the crowd who had finally filled the empty seats. The audience members took advantage of the set break to grabs drinks at the bar and mingle. Approximately 30 minutes later, Ray LaMontagne took the stage.  The backdrop provided a very colorful scene, consisting of three giant T.V. images swirling with ever changing colors throughout the set.  LaMontagne was dressed in all neutral colors, wearing a cowboy hat and hiking boots, giving a very rustic appearance. He took the stage centered between his 4 band members and rarely left his spot in front of the microphone.  He would step away from time to time for a brief guitar solo, but stayed mostly stationary throughout the entire performance.

LaMontagne’s set list was impressive and covered songs from throughout his catalog.  Half of his 18-song set list supported his latest release, Part of the Light.  The highlight of his performance was during “Ojai” when LaMontagne proceeded to jam out to his guitar under very low lights.  It was at this moment when I realized why so many people were disappointed with the venue change.  As the sounds of howling bluesy guitars filled The Anthem, I suddenly had the desire to be laying on the lawn of Merriweather Post Pavilion.  It was during this song that I understood.  His music and performance would have been the perfect companion to the relaxed feeling of Merriweather, and I suddenly felt a little disappointed that the venue had been changed. Despite the solemn stage presence, I was still impressed with this show and LaMontagne’s performance.  It was a peaceful and relaxing evening, which made sense why The Anthem provided seats for the audience.   However, I believe that some performers are better suited for certain venues.  After a 4-song encore and ending with “While it Still Beats”, I walked out of the venue to pouring rain.  At least everyone stayed dry inside The Anthem!

New Pornographers Rock a Sold-Out Crowd at the 9:30 Club
Read More
Ray LaMontagne and Neko Case Light Up The Anthem
Read More
About the author