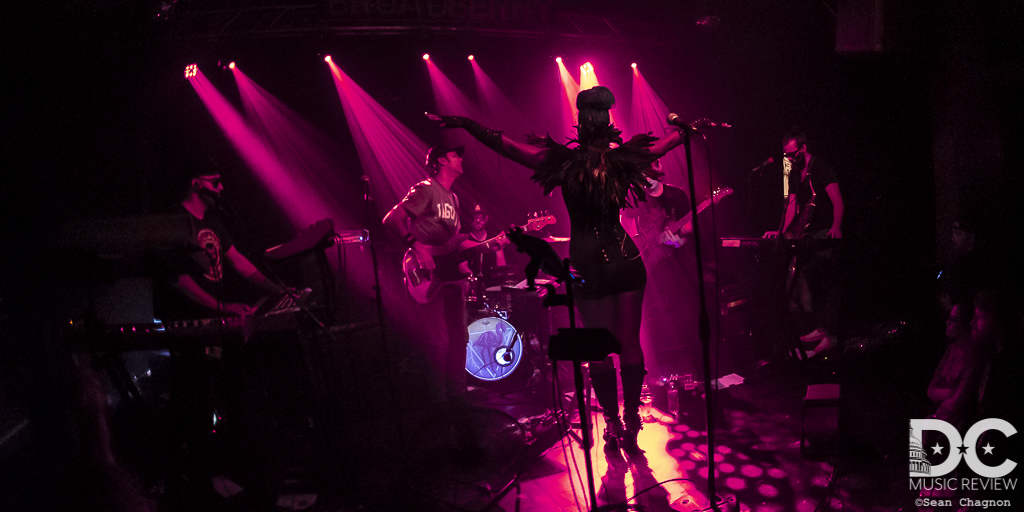 Flamingos generally are not migratory birds (unlike the European swallow), but luckily for Richmond, Virginia, Doom Flamingo does travel. The sextet, formed in 2018, is a Charleston, South Carolina supergroup that is taking the jam scene by storm. Their music isn’t the standard festival fodder, though. Their sound of synthwave comes straight from the 80’s and would comfortably reside on a soundtrack like Top Gun’s. Comprised of members from various bands in the Charleston area such as RoboTrio, and with Ryan Stasik of Umphrey’s McGee, there’s no shortage of talent spread across the stage. Doom Flamingo’s show at the Broadberry was the official after party for the Umphrey’s McGee show earlier in the night. With fans already amped up from two Umph sets, the band was set to hit the ground running. The synthwave masters took flight with “Replicant” and from there hit two of their currently released singles “Telepathy” and “Runaway.” Next, the band took Chris Isaak’s “Wicked Game” and morphed that into a dance number to keep the party vibe going. The crowd was treated to the new song, composed by guitarist Thomas Kenney, “Stay,” played for only the second time, which will be on their forthcoming debut album. Subsequently, lead singer, Kanika Moore, left the stage briefly and Mike Quinn took the reins leading an instrumental on saxophone and showed the crowd his prowess by tearing up the room with an improv solos. The instrumental “Domingo’s Drive” written by keyboardist Ross Bogan, member of the ever-morphing RoboTrio, followed. Originally named “Growler,” this tune lets Bogan, Kenney, and Quinn tear into solos on their respective instruments. As if it wasn’t hot enough already, Doom cranked the heat in the room with an absolutely scorching cover of NIN “Closer.” Kanika held the crowd in the palm of her hand as the crowd sang every word with her. Another cover followed in the form of “Love On Hold” by the Belgian, Aeroplane, with some heavy Flamingo flair applied to it. The original “Night Marchers” based on an ancient Hawaiian legend with lyrics penned by Kanika was next on the list. This will be a big part of the narrative in the forthcoming Doom Flamingo comic book that is currently in the works. The band closed the set with “Blade,” a Doom original that was inspired by Texas Chainsaw Massacre and written from the perspective of a captive of Leatherface. Doom payed tribute to one of their favorite synthwave bands, Carpenter Brut, by covering the song “Sunday Lunch” for the encore. It was an incredible performance by Doom Flamingo. Even the band themselves were psyched about how well they were synched. Due to all members having multiple other music projects, their appearances aren’t frequent, but you can find them at select Umphrey’s McGee official after parties and festivals such as Resonance, the Marcus King Family Reunion, and Charleston Pour House’s first music festival, Into The Woods. Check the links below for more information!