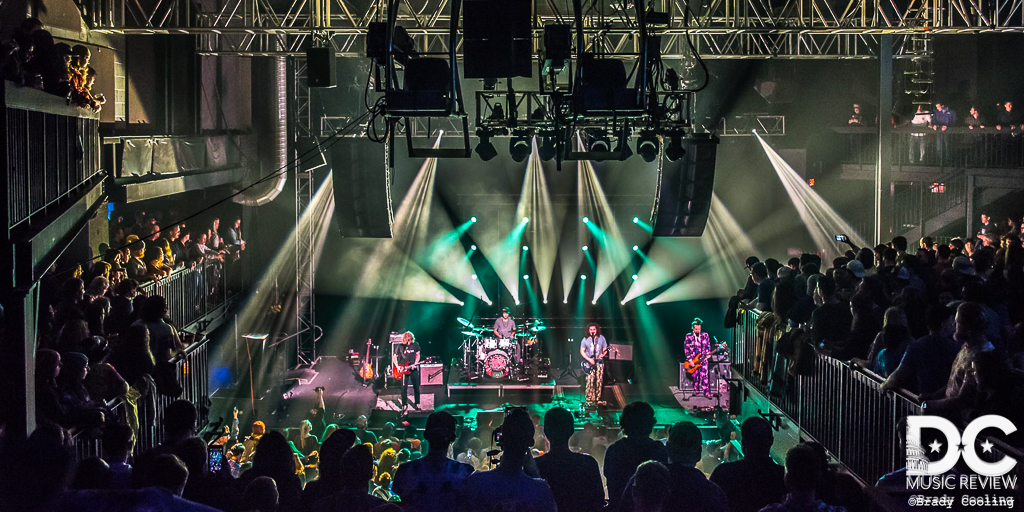 This year the hometown crowd got treated to not just one, but two full nights of psychedelic funk and the P4 guys had everyone in the room shaking off all of those extra Thanksgiving calories all weekend long. For the first of the two nights, Lespecial, a trio based out of Boston and New York would take the opening slot and warm up the crowd with their blend of heavy groove and prog rock sounds. With the crowd loosened up and ready to go, Pigeons would take the stage for the first of their four sets of the weekend. They opened the night with a strong trio of songs, “Walk Outside, “Pop off,” and crowd favorite “Melting Lights.” It was clear the band was happy to be back home and the music was a direct reflection of the fun they were having on stage playing to their family and friends, and all of the new fans they’ve gained over the past few years. The band would continue the first set with “Henrietta” and move seamlessly into a segment of “Drunk People > Otherside > Drunk People.” After “Somethin for Ya” The Double D Horns (Danny Davis and Mario D’Ambrosio) would hop on stage to add some funky flavor to the final three songs to close out the first set of the weekend, “J Town, “Whoopie,” and “Doc.” I personally love Whoopie, it’s a song that sounds like it was made to have horns, so it’s always a treat for me to hear it with the horn treatment. After a brief set break, the band would return to the stage and open the second set with a two-song sandwich of “Landing” and “Ocean Flows” complete with a very tasty jam filling. Every time I see these guys I become more impressed with their ability to improvise and stretch songs out in a cohesive way, they really are a band firing on all cylinders right now and it’s a lot of fun to watch. After the opening jam sandwich the crowd would get a chance to slow it down a little bit with the chilled out funky vibes of “Sunny Day.” The band would throw a nod to Led Zeppelin during the jam segment of “Funk E Zekiel > Kashmir > Burning up My Time > Overrun, before the Double D Horns would return to the stage once again for one of the band’s signature song combinations with “Spacejam > The Hop > FU.” This time around though, the band would pull out a surprise and bust out a cover of David Bowie’s “Lets Dance” before going back into “FU” to end the second set. The whole segment was a treat and a great way to close the second set, there wasn’t a single person standing still. Encoring with “Dawn a New Day,” it was the perfect way to end the first night knowing that we all had a second helping of music and good times coming to us the next day.

On Saturday, after all of us had had a few more plates of Thanksgiving leftovers and took an extra nap or two, the party would return to Rams Head Live for night two of Pigeons Playing Ping Pong’s pair of performances. Jeremy Schon sharing a laugh with Jordan August on stage

Michigan based band Joe Hertler and the Rainbow Seekers would take the opening slot for Saturday’s show with their eclectic blend of sounds and high energy. With the crowd warmed up and ready for night two, Pigeons would return to the stage with a crowd-pleasing “Porcupine” opener. The quartet then ran through well-played versions of “Sail on,” “Bad for You,” and another crowd favorite “Julia,” before really getting into the meat of the set and turning the energy levels up. “High as Five > PYT > Pinball Wizard > High as Five” was a jam sandwich that would have gotten any party turned up. The Pinball Wizard was a nice surprise and the band nailed it, complete with guitarist Jeremy Schon doing Pete Townshend style arm windmills during the Who cover. After running through a short but sweet version of the high energy “The Liquid,” the band invited local musician and photographer Jordan August to the stage to join them for an outstanding performance of “Lightning” that had me and everyone around me smiling and moving. It was Jordan’s birthday as well so there was a little extra love in the jam between the longtime Baltimore musicians. Next up would be a debut of a brand new song called “Yo Soy Fiesta” which I can only assume is a nod to Rob Gronkowski, and I love it. The catchy Latin-flavored tune is sure to be a crowd pleaser for a long time, and the jam potential for the song is something I personally look forward to hearing progress as it gets played more. They closed the first set with the high energy instrumental “Avalanche” before heading backstage for a short set break.

Jeremy Schon sharing a laugh with Jordan August on stage

After the break they would waste no time and come out of the gates hot with great extended versions of “Whirled” and “Poseidon” before launching into a cover of the Beatles, “While My Guitar Gently Weeps” that would segue into “Couldn’t we all” before launching into an “Upfunk > Drums > Upfunk” sandwich. It should be noted here that drummer Alex Petropolous (Also known as “Gator”) murdered his drums during this solo, and I hope they’re enjoying the afterlife with their other fallen brothers and sisters. In all seriousness though, he is a bad man on the drums. The catchy “Fox and Toad” would come next and lead the way for an always crowd favorite, “Horizon.” With it being the weekend after Thanksgiving, celebrating the people you love is something that most of the people in the room and I had been doing for a few days already, and so in that spirit that particular song is extra fitting around this time of year. Ending the second set with “Fun in Funk,” the band would leave the stage briefly and return for a solid, lengthy encore with “Zydeko > Sir Real > Zydeko.” The double encore segment was a great cap to a stellar weekend of music and friends in Baltimore. As an aside to the show, while I was there I couldn’t help but think about how far these guys have come since I first started seeing them about 7 years ago now. It has been so much fun to watch them grow as a band over the years, and they deserve every amount of success that they have coming to them. Those guys work hard and they are constantly touring, and it makes me truly happy for them to see all of their hard work and grinding on the road pay off. If they are coming to your town, go see them if you haven’t, but buy your tickets before the show because chances are it will sell out. They are a great band, and equally great human beings (or birds?) and they are on a trajectory to ascend into the stratosphere. The sky is the limit for these birds. We know you are watching Rob Gronkowski!

1, With The Double D Horns (Danny Davis on trumpet, Mario D'Ambrosio on saxophone) 1, With Jordan August on Guitar