The Pigeons Bring the Funk to “Norflock,” Virginia Because Virginia Is For Flockers 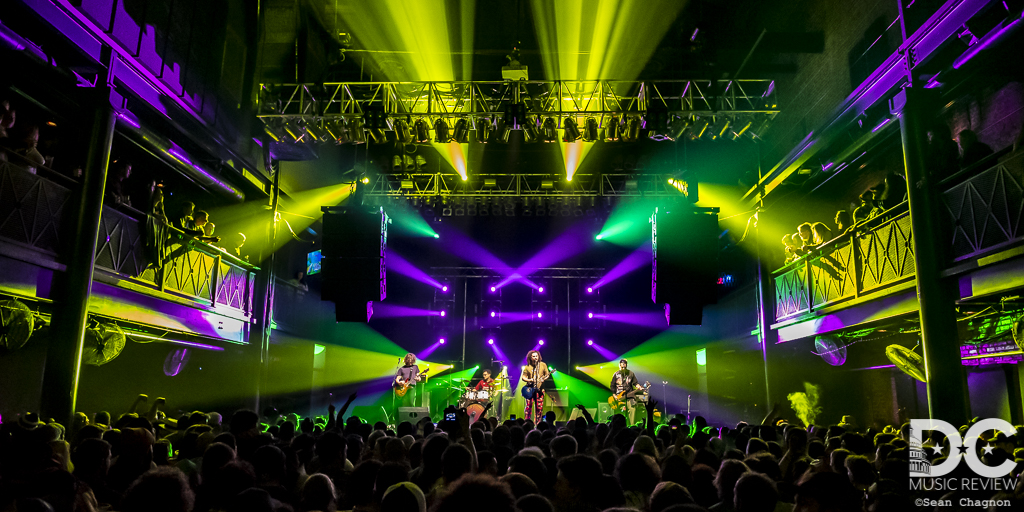 When the Pigeons decent on a city, two things are guaranteed: their fervent fan base, The Flock, will be in tow, and there’s going to be a party happening that night that is not to be missed. January 31 was no exception in Norfolk (Norflock!), VA. Pigeons Playing Ping Pong blew the roof off The NorVa, with the help of The Fritz, to a packed house of insatiable Flockers. PPPP were unstoppable last year between their nonstop touring, festival appearances, and themed concerts like their “Red Hot Sgt. Peppers” Halloween run, and their “New Year’s stEVE” show to end 2018. There aren’t any signs of them slowing down in 2019 either. They’ve sold out five out of eight of their first stops on their winter/spring tour, which include iconic venues like The Capitol Theatre in New York and the Orange Peel in Asheville, NC. Two weeks after their show at the legendary Red Rocks Amphitheatre, they’ll be flocking to the 10th annual Domefest: The Pigeon’s three day festival. It's no easy feat to share the stage with a band like Pigeons with the energy they bring, but openers, The Fritz, came prepared to prime the crowd. The Asheville based quintet came screaming out of the gates and didn’t look back once. Opening with the song "Sound. Habits. Blame.," featuring a rocking intro courtesy of Jamie Hendrickson on guitar and keyboard licks straight from outer space by Jamar Woods, the crowd was hooked from the start and didn’t stand still until the music stopped. The Fritz has the ability to seamlessly transition from funk to rock to soul and mix them all together as they see fit as their setlist proved. Wrapping up their originals with Nothing to Find, the band put it out there with a slap happy bass intro by Jake O’Connor and Woods belting out the lyrics. But they had one more card up their sleeve to whip the crowd up into a frenzy before leaving the stage: a hard rocking cover of Black Sabbath’s "War Pigs." Pigeons Playing Ping Pong walked out on stage to a room full of Flockers that was ready to party all night. Their first set started with two tracks from their newest release Pizazz: the light and melodic "Henrietta," which was jammed into the psychedelic instrumental, "Offshoot," that allowed lead guitarist Jeremy Schon to tear into his mind melting solos right out of the gate. Pigeons switched back to the lighter side of things with the tropical flavored "Julia," which had everyone’s favorite Little Mermaid song that had taken a six month hiatus, "Under The Sea," sandwiched in the middle. Some other highlights were a Lightning with a nice extended jam, "Fun in Funk," and porcupine to wrap up the set. Set two was absolute fire from beginning to end. The set started with Somethin’ For Ya, and they undoubtedly had somethin’ for the Flock. That was jammed into "Skipjack" with The Beatles’ "Eleanor Rigby" snuck in the middle. "Skipjack" is one of the Pigeon’s songs that lets bassist Ben Carrey shine and he was slapping his bass like they were in a cat fight in a high school hallway. Horizon was taken for a long ride, which allowed their incredibly talented lighting designer, Manny Newman, to really stretch his wings and fly high. That was jammed into a funky "Fade Fast," which featured Alex “Gator” Petropulos absolutely going off on his drum kit. The set finished with fan favorite, "The Liquid," with singer “Scrambled” Greg Ormont performing some of his signature dance moves for the giddily exuberant crowd. The encore was another conglomeration of songs that, at first look, have no business being played as one, but the Pigeons are one of the best at making these mashups happen. It started with "High As Five," which was jammed into Michael Jackson's "PYT," which slid right into The Who's "Pinball Wizard" (complete with windmill guitars!), and back into "High As Five" to finish the night.

With the energy and talent these guys bring to the stage, there’s no wondering why they’re on such a hot streak right now. Get to one of these shows to experience a Pigeon party as soon as you can. You’ll be a Flocker for life!

Click here to see the setlist for Pigeons Playing Ping Pong performance at The NorVa on January 31, 2019 NOTE: Zydeko was not played.

Click here to see the setlist for The Fritz performance at The NorVa on January 31, 2019 #VIRGINIA IS FOR #FLOCKERS!! Can't wait to close out this month in C-Ville and Norfolk with @theFRITZmusic

#TBT Backstage ballin' at The NorVA...

Tickets are still available for tonight's show in Norfolk at bit.ly/ppppJan31 #swish

FRESH POSTER for this week's shows in Charlottesville, Norfolk, Asheville & Raleigh by the one-and-only @thejamesflames !!!