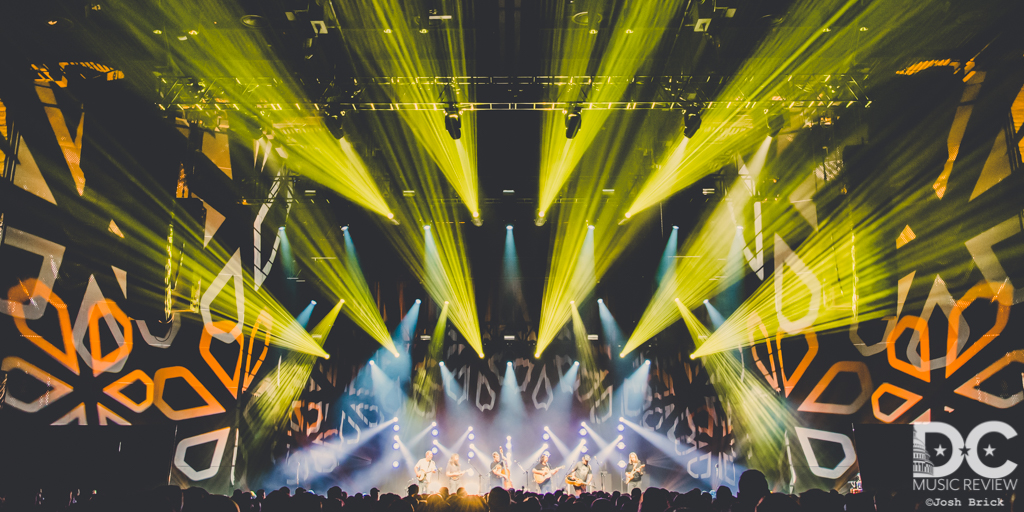 Jamgrass titans Greensky Bluegrass (GSBG) treated DC to pair of unforgettable shows at The Anthem last weekend with guitar phenom Billy Strings and his band. The Michigan quintet blew the roof off the world-class venue in support of their recently released album, All For Money, as they near the end of their 2019 Winter Tour. The Anthem also proved to be a perfect canvas for the band's longtime lighting designer/director, Andrew Lincoln – who took full advantage – creating a truly stunning visual display that wowed the audience both nights.

Exactly a year since their last DC jaunt, Greensky again welcomed Billy Strings and his talented band to open the
two-night affair to the delight of his dedicated fans. Strings and his band captured the attention of everyone in the
large room with their stellar picking and strong vocals. Their sound ranges from traditional bluegrass with beautiful harmonies to a harder, faster rock style that allows Strings shred on his acoustic with serious fervor. The band treated the crowd to a pair of choice covers, "China Doll" (Grateful Dead) followed by "Midnight Rider" (Allman Brothers Band.) and the stage was set for the main act. Greensky took the stage and the show began with an unusual
"Hey Jude" refrain to which the crowd helped with on vocals. After a bit of confusion, it became clear that bassist Michael Devol's young daughter, Jude, had emerged on stage, prompting the band to say... "Hey, Jude!" The band had a laugh and launched into New Grass Revival's "Can't Stop Now" before settling into the beautiful "In Control," showcasing Paul Hoffman's (mandolin, vocals) strong voice. The band then paid tribute to one of their heroes, Del McCoury on his 80th birthday, leading the crowd in a raucous "Happy Birthday Del!" before their take on McCoy's "Beauty of My Dreams." The first set featured a pair of songs from All For Money, including the album-opening "Do It Alone" as well as "Collateral Damage," before the set closing duo of "The Four" and a rousing "Run or Die."

After a break, GSBG opened with the relaxed "What You Need," followed by "It's Not Mine Anymore" – a Dave Bruzza (guitar, vocals) tune that delved into deeper musical territories, featuring Anders Beck wailing on his effect-driven dobro. The middle of the set featured a strong  duo of GSBG classics, "Bottle Dry" > "Jaywalking" before the always popular (for good reason) "Time > Breathe" Pink Floyd rocker. Greensky saved the best for last, as they welcomed Billy Strings and his bandmates Billy Failing (banjo) and Jarrod Walker (mandolin). "Do you guys like fun?!" asked Beck. What followed was a hell of lot of fun and the crowd made sure to let the band know. The now octet launched into a powerful "Don't Lie" from GSBG's 2011 release, Handguns, and the band was off to the races. Devol dictated the pace on his upright bass as the pickers strummed with serious fury, complementing each other beautifully along the way. Strings and his mates more than kept their own and the Greensky fellas, to their credit, let them shine. The guitar duo of Strings and Bruzza was something to behold, before Beck returned on slide and led the charge in the song's final section, once again asking "Are you SURE (you like fun)?" The band raged on with awe-inspiring force before seamlessly transitioning into the Strings-penned "Meet Me at the Creek." Hoffman and Walker had themselves a formidable (and beautiful) mandolin duel before the band slowed things down for just a bit, only to catch their collective breath for a mere moment before escalating into a mind-bending  crescendo before the "Don't Lie" coda to close out the set.

Click here to see the setlist for Greensky Bluegrass's performance at The Anthem on February 1, 2019

1. When I Get My Hands On You (The New Basement Tapes cover)

Night 2 – Digging Up the Dust and Bone

After a smoking first night, Greensky Bluegrass returned to the same gargantuan stage at The Anthem for what would be an even hotter show. The band got things going by teasing the apt "Groundhog" before going into "All For Money," the title track of their freshly released record. After "A Letter to Seymour," GSBG strummed the familiar chords of "Wings For Wheels" to the delight of the crowd. Up next was a funky take on "Ain't No Bread in the Breadbox" that ultimately led to a "Don't Lie" tease, bringing back memories from Friday night's massive performance. Other first set highlights included the always delightful "Tuesday Letter" as well as the brief heater, "Burn Them." The band returned to the new material with an extended "Courage for the Road" before a rousing take on the set-closing Fleetwood Mac classic, "The Chain." Hoffman's vocals were on point and sent the crowd into a tizzy as he belted the chorus before the band went into the familiar bassline breakdown as Anders Beck turned up his dobro and went full chainsaw to close the set.

After the usual break, GSBG was ready to deliver the best set of the weekend as they came out with the driving "Windshield" to the roar of the crowd. The band wasn't messing around and went straight into "Living Over," giving them a chance to improvise and unleash their signature hypnotic sound.  After the new "Do Harm," Greensky Bluegrass paid tribute to their friend and colleague, Baltimore's own, Cris Jacobs with a raucous rendition of "Bone Digger." Once again, the band let it all hang out for the closing stanza. Michael Devol's bass pounded away during "Worried About the Weather," providing the heartbeat of a band on fire. Beck dabbled with a bit of dobro "wah" as the band strummed underneath with serious aggression. Next they segued into the haunting "Bring Out Your Dead" that seemed to shake the foundation of the large venue as the band had the crowd fully in their grasp. The party wasn't over as Beck introduced "the one and only, Billy Strings," who joined them again – this time on this grandfather's electric prison guitar. After "I'd Probably Kill You," Greensky tore it up on the always raging, "Kerosene." During the middle section, the pace slowed for a mere moment as Bruzza strummed his electrified-acoustic guitar before Strings had a go on his fully-electric axe. The virtuoso held nothing back and delivered a soaring solo as the entire band supplemented him perfectly to close the second set.

After a short encore break, Greensky Bluegrass took the stage and thanked the lively crowd and tipped the crowd to an All Good Presents event in the summer. The band sent the crowd home with a "Past My Prime" encore and it was clear that this formidable band will be in their prime for a long time to come.

Click here to see the setlist for Greensky Bluegrass's performance at The Anthem on February 2, 2019