The Revivalists Rock the Anthem 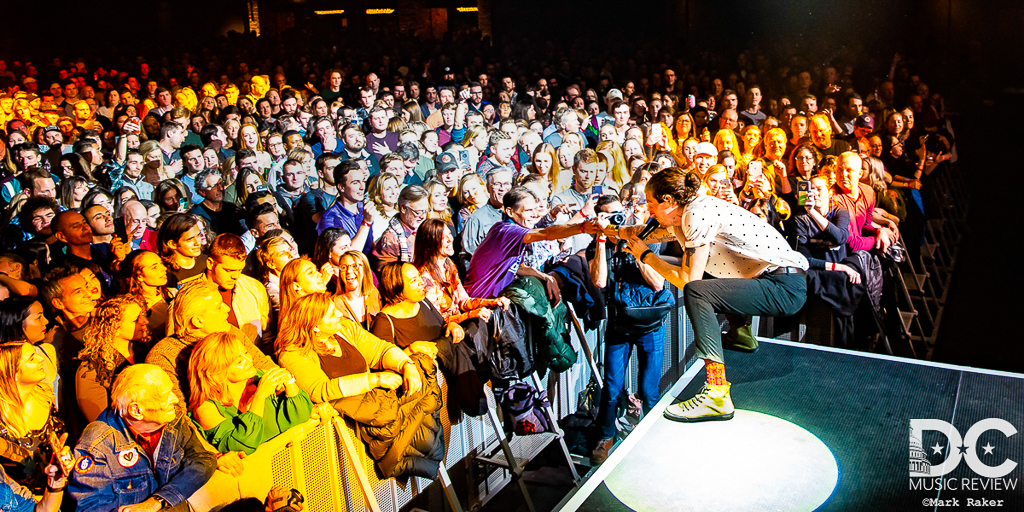 Ahead of a snowy forecast in D.C., a sold-out crowd packed The Anthem Friday night, January 11, for an evening of
feel-good music that had most singing along to throughout the entire show. American Authors opened the show warming the crowd up with a performance that got ​everyone hyped up. Jumping out into the crowd early and interacting with the fans, playing a song that could be the theme for any night with "I Wanna Go Out" and even slowing it down a bit during their set proved why they were a great match to be touring with the headlining act.

During the short break between bands, the venue filled with a wide variety of fans ranging in age from elementary school to retirees, all eager to see The Revivalists take the stage. Coming out literally swinging (a saxaphone), the band's energy was electric from the start.  Opening with two tracks from their October release, Take Good Care, "Oh No" and "You Said it All," combined funk and energy as each member of the band the eight piece band was putting their all into each note for the entirety of the performance. Rob Ingraham of The Revivalists on Saxophone

Rob Ingraham of The Revivalists on Saxophone

Throughout the show, while talking to the crowd, lead singer David Shaw spoke a lot about positive messages for the 2019 year.  He also reminisced about their last trip to the area, asking the crowd, "Who came to Wolftrap when we played there?!" Also speaking about what has clearly changed immensely, with the sell out crowd as evidence, he reminded the crowd about the times when they used to play for only ten people and expressed his appreciation for the fans that had been with them since.  Thankful for them, he noted that there were years when that was exactly what they remained doing, playing for not many people.

Between an epic light show that changed color schemes for each of the songs and slowing it down a bit for tracks like, "Some People Say," the crowd supported the show every step of the way.  Couples swaying and people throwing their hands in the air singing along to every word, had The Anthem shining and demonstrating why they are a venue that you don't want to miss experiencing live music in. Zack Feinberg of The Revivalists

Zack Feinberg of The Revivalists

Living up to the words in the song and high stepping their way over each inch of the stage while singing "You and I", the crowd joined the band singing along to the lyrics, "So all I wanna do is dance. I just wanna raise my hands. Raise em up to the sky. Just you and I."  A band with that many members is a lot to work with, but each individual had their time to shine and the excitement on the stage was magic.

After playing "Up In The Air," a track off their 2014 City of Sound album, Shaw again addressed the crowd encouraging attendees to live their best life.  "Sitting on the couch worrying about shit does NOT work."   Instilling a message of having a positive outlook for 2019, faces lit up and smiled at one another as the tambourine shook vivaciously from behind the drums. The Revivalists provided non-stop energy with an unforgettable performance until the very last note!

Waiting until the very end to play one of their biggest hits to date, "Wish I Knew You," the fellas left everyone wanting more and they got just that.  A double encore included a Pink Floyd cover of "Have a Cigar"  and no one wanted to leave the venue until the​ir cup runneth over.  Attendees went wild after the first three-song encoure and their was no denying they deserved one last tune.  Closing the evening out with "Soulfight" and thanking the crowd for their support, The Revivalists left it all on stage showing just why it is that they are selling out venues left and right on this tour which also includes some overseas show dates in February.

Tonight. Us and 6,000 of our closest friends. See you soon DC! @americanauthors will be saying hi first

No muse. No art. #therevivalists #tbt

Click here to see the setlist for The Revivalists' performance at The Anthem on January 11, 2019

1. Otherside of Paradise
2. Have a Cigar (Pink Floyd cover)
3. Criminal