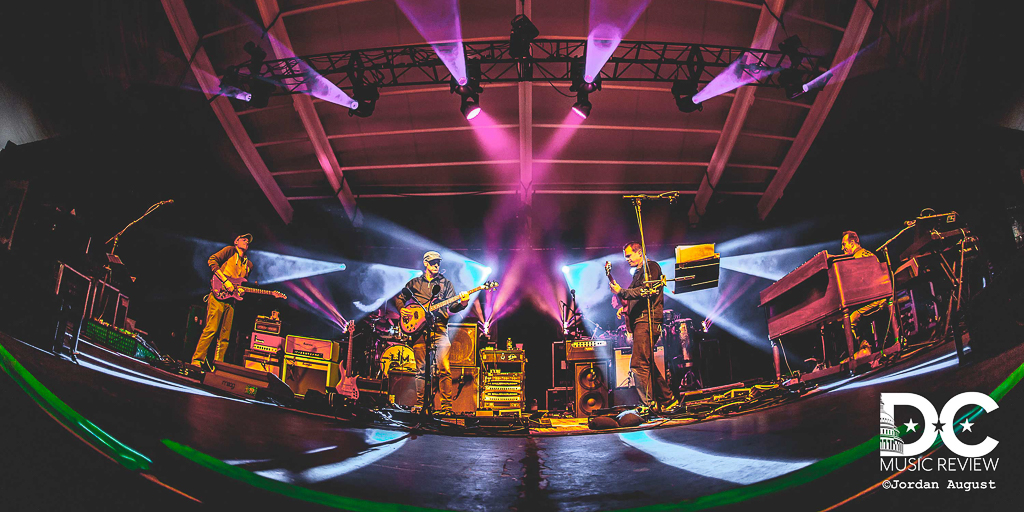 Umphrey's McGee made their return to the DMV area, a full eight months since their last stop in the region , with a stand out performance at Baltimore's MECU Pavilion on Saturday, October 13. After foregoing this traditional stop on Umphrey's summer swings to play an extra set at LOCKN' Festival in late August, the jam-rock sextet brought fans to the Inner Harbor on the first brisk autumn evening of the season, but heated up the venue with two excellent sets of music. Just over a week into their fall tour,  Umphrey's sounded extremely tight and delivered several outstanding jams for a Saturday night rager. The band opened with an extended section of improvisation coming out of "Attachments," a staple that landed on the bands recent b-sides album, "it's you." After working through standard versions of "Cemetery Walk" and "Whistle Kids," the highlight of the set came in a three-song run of "Intentions Clear > Dear Lord > Speak Up." Both "Intentions Clear" and "Speak Up," included extended jams, with the former breaking far from the song's structure, building to an outstanding guitar peak. "Dear Lord" also broke from its typical arrangement, with bassist Ryan Stasik offering a different timing to the song's opening chord progression, before the band closed the first set with the disco-infused electronica of "Cemetery Walk II." Opening the second set with "All in Time," it was clear that the band had some hijinks in store for the second set, given how the band will often divide the prog-rock epic into sections performed at different points of the show. Following excellent jams in "Hurt Bird Bath" and "The Linear," Umphrey's addressed an "elephant in the room" of sorts busting out the Led Zeppelin classic, "Good Times, Bad Times." While Umphrey's used to visit DC and Baltimore regularly, their absence this year was noteworthy and likely a result of the band's playing three sets at this year's LOCKN' Festival.  The third of those sets featured special guest Jason Bonham to play a handful of Led Zeppelin tunes. Following one last improvisational highlight in "Miami Virtue," the band closed the show by concluding "All in Time."

The band has clearly been feeling themselves early in this tour, with keyboardist Joel Cummins tweeting out after this show, "In case you haven’t heard, @umphreysmcgee is really good right now."

In case you haven’t heard, @umphreysmcgee is really good right now. This weekend’s run ends @capitoltheatre in Port Chester #NY. Our friends @SouthernAveMEM hit at 7:30, 2 sets of UM 8:45, tix at the door. If you can’t make it, stream it #free on @YouTube. #umphreys #music #ny pic.twitter.com/Uxy2ggSJ4H

Umphrey's McGee will return to the region this January, opening their winter tour with two nights at the National in Richmond, VA.

Click here to see the setlist for Umphrey's McGee's performance at the  MECU Pavilion  on October 13, 2018

1. There's No Crying in Mexico