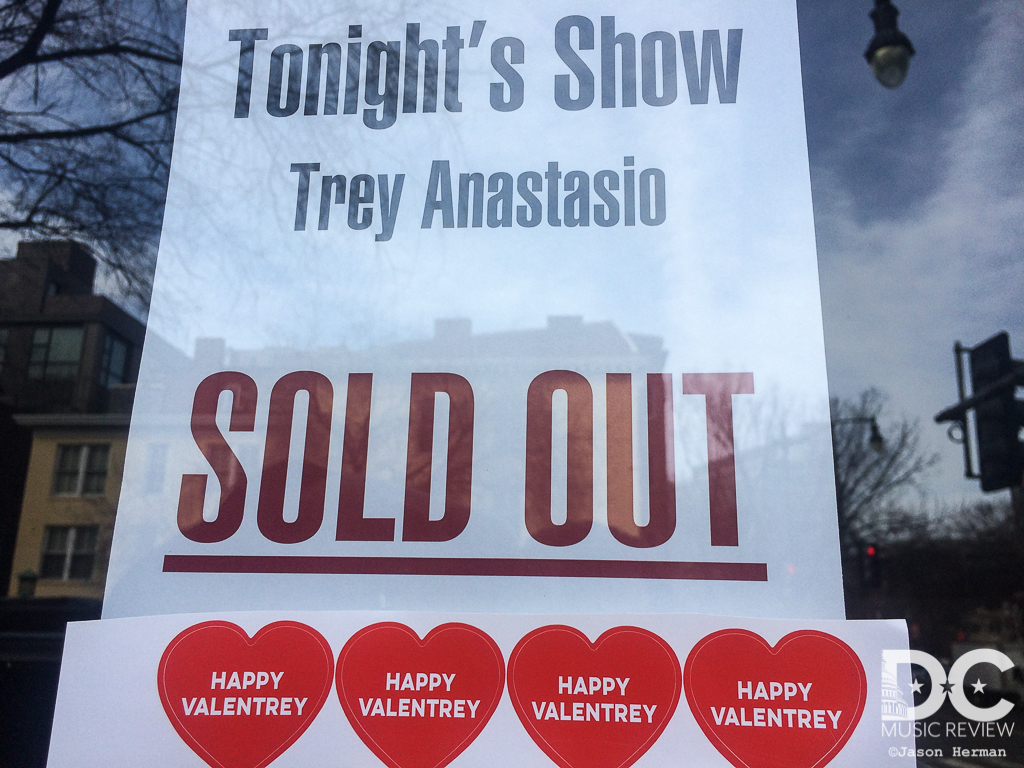 Phish frontman Trey Anastasio rolled through DC this Valentine’s Day, bringing his solo acoustic tour to Sixth & I Historic Synagogue. On the heels of five shows throughout the Northeast, fans were treated to an intimate live performance laced with storytelling and one-man jams on favorite tunes from the Phish catalog, old and new. Anastasio opened the evening with a song combination that served as a nod to the city and the setting. First was 'AC/DC Bag' the oldest song played that night, debuted by Phish in 1986. The unique connection between the crowd and Anastasio at these acoustic performances was evident early, when fans instinctively anticipated a call and response after the lyrics, "Sit up and take notice,” gleefully replying with, "tell it like it is." After playing the Gamehendge classic 'The Man Who Stepped into Yesterday,'  Anastasio transitioned, as Phish has so many times since 1987, into 'Avenu Malkenu.' Although he has performed the traditional Jewish prayer 79 times with the band, this was his first performance on an acoustic guitar. After finishing the song, with some requested vocal assistance from the crowd, Anastasio remarked on bassist, Mike Gordon, teaching that song to Phish and the meaning of the Hebrew lyrics, adding that as a Catholic, he “mostly wonders whether or not the body of Christ is gluten-free.”

Later in the set, 'Wolfman’s Brother' gave the first glimpse at the delay-loop jams that characterize the improvisation of these acoustic shows, with Anastasio layering recorded samples of his guitar and playing solos over their repetitions, a technique he’d show off again in new originals like 'Everything’s Right' and 'Blaze On.' The performance of 'Wolfman’s' also led to the storytelling highlight of the night, with Trey telling the crowd how the song reminds him of a time the band got into a heated argument about cavemen during a photo shoot, dressed as cavemen. Trey concluded the hilarious story saying he thought it nearly led to the end of the band.

'Back on the Train' served as the next musical highlight, with outstanding solo work by Anastasio. After the instrumental, 'The Inlaw Josie Wales,' Trey dedicated 'Strange Design' to his wife, Sue, who was in the crowd for the Valentine’s Day show, mentioning that it was written just days before their first daughter was born in 1995. Later, after hearing a request in the crowd and declaring that some songs just wouldn’t work acoustic, Anastasio played 'Sand' and rather than jumping off into another jam, he segued into the acoustic debut of 'The Curtain,' a song that did work extremely well in the acoustic setting. Following some sing along favorites in 'Farmhouse' and 'Bathtub Gin,' Anastasio ended the show with 'Wilson,' and the crowd filled the sanctuary with chants of the Gamehendge villain’s name.

Anastasio's tour continues with two nights in North Carolina, followed by the tour closer in Athens, GA. Fans who seek out the recording of this magical performance at Sixth & I should be sure to check out 'Wolfman’s Brother,' 'Everything’s Right,' 'Back on the Train,' and the outstanding acoustic debut of 'The Curtain.' Also be sure to listen to the story after 'Wolfman’s!'

From our hearts to yours. @treyanastasio redefines love tonight on our stage. Sticker genius by @dcmusicreview #phish

Click here to see the setlist for Trey Anastasio's  performance at Sixth & I Historic Synagogue  on February 14, 2018

2. The Man Who Stepped Into Yesterday >

5. Theme From the Bottom

9. Back on the Train

2. Bouncing Around the Room

See you tonight, DC! You can pick up this poster by @statusserigraph at the merch stand.