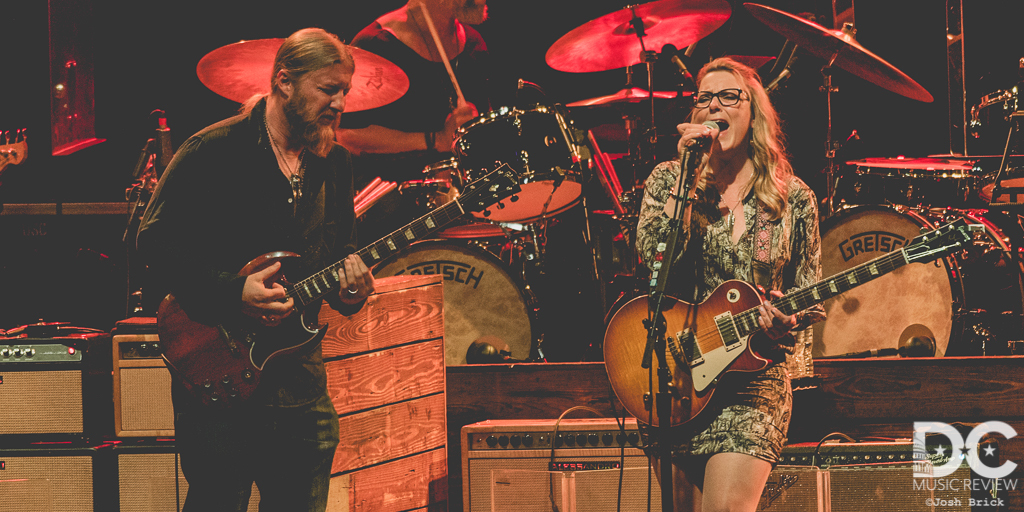 The 2018 Wheels of Soul tour returned to Wolf Trap National Park for the Performing Arts in Vienna, VA on Wednesday, July 11 with Tedeschi Trucks Band (TTB) once again headlining the stacked bill. This time, TTB brought along southern rockers, The Drive-By Truckers (DBT), and fast-rising southern soul jam outfit, The Marcus King Band (MKB). It was a beautiful summer evening at the revered national park and the sold-out show proved to be a memorable one.

Marcus King and his band opened the show with a short, yet potent set to warm up the crowd. The South Carolina native displayed his vocal prowess and guitar chops as he led his talented band. Fans were treated to the first Susan Tedeschi (vocals) sighting of the evening as she joined MKB on Bobby Womack's 'Woman's Got to Have It,' one of King's favorite tunes. Smiles lit up the stage as Marcus could not hide the joy he felt as he and Susan traded vocals. The band closed with the apt, 'Virginia,' off MKB's latest release, their self titled 2016 album. Fans showed their appreciation for Marcus and his band, clearly wanting more. Luckily, they return to the area on Friday, August 17 at The Birchmere before playing the following day at Hot August Music Festival. Next up was The Drive-By Truckers, veteran southern rockers based in Athens, GA. The soulful rock outfit, led by Muscle Shoals native, Patterson Hood (guitar, vocals), treated the crowd to an hour-long set that featured many of the band's best songs. Formed in 1996, DBT are no strangers to touring and have built a dedicated fanbase over the years. The band's sound has a classic southern rock flavor ala Neil Young  that they combine with great songwriting reminiscent of Tom Petty at times. Hood shares his vocals with Mike Cooley (guitar, vocals) and Jay Gonzalez (keys, guitar) for a powerful combination. A highlight from their set, 'What It Means,' is quintessential Drive-By Truckers and left a lasting impact on the crowd. Hood once again told his story, describing his views on today's world and the injustices that plague it. The band closed with 'Let There Be Rock,' an original coming-of-age tune that featured Hood exclaiming that he once opened for the Allman Brothers Band - a perfect segue to the night's main act. Tedeschi Trucks Band took the stage shortly after 9PM and put on a masterful display of soul, rock, blues and gospel music. The band opened with a relatively new track, 'Shame,' which will be featured on their upcoming album. The tune proves to be a perfect vehicle for Tedeschi's powerful vocals, which reverberated through the beautiful pavilion. 'Made Up Mind' was next, off the band's 2013 sophomore album of the same name. The band was rolling early, as Susan was backed by the ample trio of Mark Rivers, Alecia Chakour and Mike Mattison on vocals. The band brought it down to highlight Rivers on a vocal solo before Derek Trucks (guitar) wowed the crowd on his Gibson SG for the first time of the evening. The band cooled things down with 'Don't Drift Away,' a smooth R&B number followed by 'Part of Me.'

The band treated the crowd to two Bob Dylan tunes, beginning with 'Down in the Flood,' a tune previously covered Derek Trucks Band in their touring days. 'Lord Protect My Child' came next, which Tedeschi dedicated to "all the mothers and fathers out there." Kofi Burbridge (keys, flute) added his touch on flute as the backing singers took the crowd to church. 'Idle Wind' followed, the show's first extended jam that featured Trucks emulating the late Ali Akbar Khan at times, displaying his Indian musical influences. Drummers JJ Johnson and Tyler "Falcon" Greenwell added their touch with an extended drum solo before the band came back in for the song's coda. Marcus King returned to the stage for a take on Charles Segar's blues classic, 'Key to the Highway.' Mattison provided lead vocals on the first verse before Tedeschi took a turn with a solo on her Gibson Les Paul. King had his turn next, playing a tasteful solo with immaculate tone and cadence. The crowd roared as he lent his vocal talents for the next verse, before Trucks once again wailed on guitar. King remained on stage for Joe Tex's 'Show Me' before another set highlight, 'Bound For Glory.' The crowd favorite featured DeShawn "DVibes" Alexander from MKB on the organ, as Burbridge played beside him on piano.

TTB closed their set with another Dylan track, 'Going, Going Gone' that featured Hood and Cooley from
The Drive-By Truckers on vocals. It proved to be a highlight of the show, as the vocal harmonies rang through the night sky with a palpable fervor. After a short encore break, the band returned with a cover of Derek and the Dominos 'Tell the Truth' before closing with a rousing 'Get What You Deserve.' The band departed to a loud ovation from the grateful crowd as Tedeschi wished everyone safe travels home. Tedeschi Trucks Band again proved they are one of the best touring bands on the scene, and will return to the area at Lockn' Festival in late August.

Click here to see the setlist for Tedeschi Trucks Band's performance at Wolf Trap on July 11, 2018

5. Down in the Flood (Bob Dylan cover)

1. Tell The Truth (Derek and The Dominos cover)

2. Get What You Deserve (The Derek Trucks Band Cover)

2.  With Deshaun Alexander of Marcus King Band on organ/keyboard

3. With Patterson Hood and Mike Cooley of Drive-By Truckers