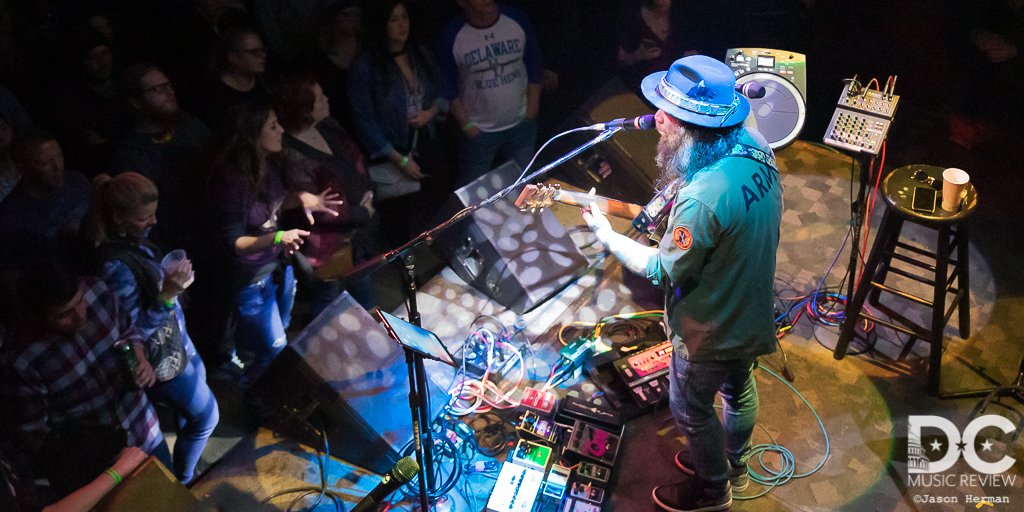 The evening kicked off at 9 pm at Baltimore’s most intimate live music club and bar. The club is set in a row home establishment in the city’s historic Federal Hill that sits among Baltimore’s most popular bars. The purple building houses a cozy two-story dance floor that has hosted some of the very best national and local acts. This includes a little known regional band out of Vermont band called Twiddle. who made their southernmost stop at this venue way back in in the Fall of 2011. On this evening, a moderate, yet devoted fan base gathered in anticipation before the venue’s small lifted stage. Other adoring fans hovered atop the stage on the club’s upstairs balcony as they brimmed with excitement as folksy, singer-songwriter Grubby Bean provided entertaining tunes for the audience.

Colorful lights danced behind Grubby Bean as he strummed his black acoustic electric guitar. The musician from Vermont, had a laid-back feel as he sat upon a stool on stage. The musician wore a stylish scarf that complemented his shimmery silvery locks, as he entertained the small crowd of less than 50 with originals written by himself and some covers, including an old-time tune popularized by the Jerry Garcia Acoustic Band and the Grateful Dead’s, I Know You Rider, thrilling the audience and causing them to sway, clap and sing in delight. For the last song of his hour-long set, Grubby Bean welcomed Mihali, on stage. The headliner wore his classic Air Jordans with a not often seen, flat brim hat, for a more laid-back version of Mihali. The two musicians and longtime friends jammed together as Grubby Bean sang and strummed a solid melody while Mihali noodled a warped-out harmony on his acoustic-electric wood grain guitar. Together they wound up the crowd’s excitement, holding them in suspense before bringing them back down to earth with a new sense of clarity about what the evening would hold. 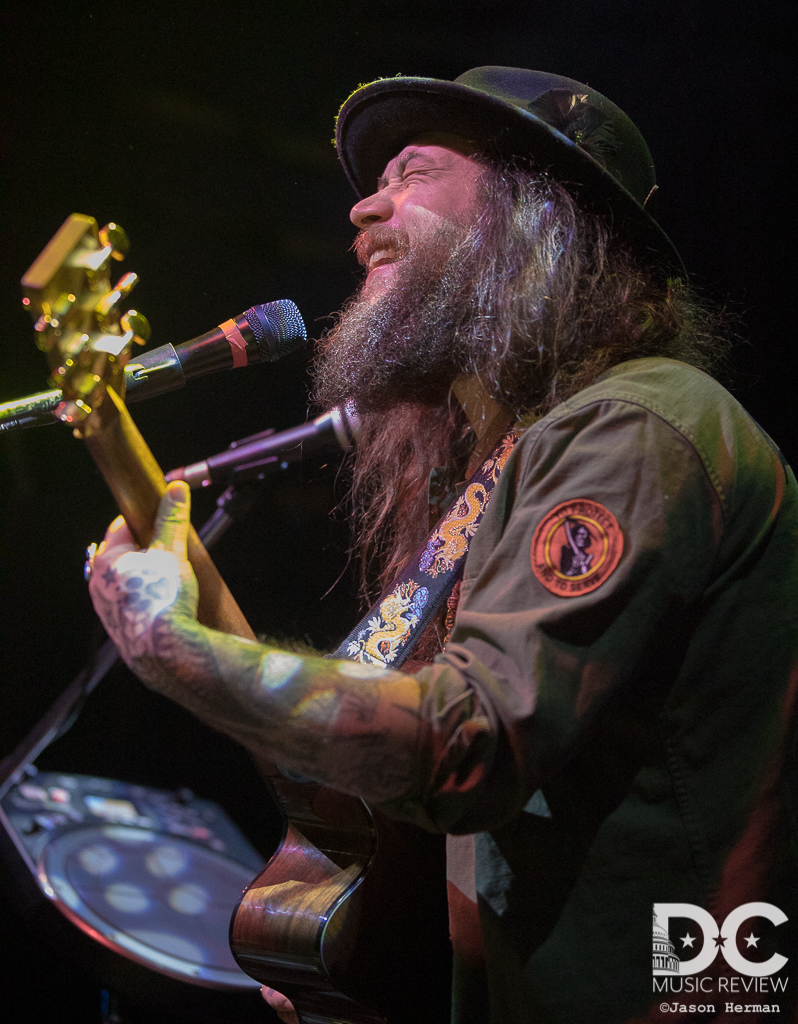 The still small and intimate crowd, grew a little in size. After a brief stage change, Mihali returned to the stage ready to rock, still in his classic Air Jordans, but this time with an army green jacket and a western style hat, that Mihali has become known for. Mihail thanked his good friend Grubby Bean for sharing the stage with him and said that he might not be where he was if it weren’t for Grubby Bean. Mihali, with his guitar, stood before a board of several pedals and beside him sat a new rig that included an electronic bongo kit and a soundboard of mixer buttons. He jumped right into his 90 minute set opening with a new song, Breathe and Go Slow, where he introduced his ever-growing loop and one man band skills. Following that, he played a remixed version of Twiddle’s original, Lost in The Cold, which included heavy beatboxing and fat reggae jams. Devoted fans sang along to the classic, line by line with passion and volume. Mihali played two new songs, “Carved Lines” and “Fading State.” Fading State is one of his three songs on Spotify and is a collaboration with Trevor Hall and Nahko from Nahko and Medicine for the People. Mihali played a few more originals and Twiddle classics, such as Beethoven and Greene, Jamflowman, Every Soul and Hattie’s Jam into When it Rains it Poors. Mihali ended his set with a cover of Girl, I Wanna Lay You Down.

Mihali’s performance during this solo tour are reportedly different from years past. Most notable is that Mihali is standing instead of sitting for his shows which fans are responding to with positive feedback. That difference along with Mihali’s new musical rig bring an added energetic and even more uplifting quality to his performance.

Mihali’s show was a unique experience to all who were lucky enough to witness his magic. Mihali's solo project is a stripped down and raw version of the musician who plays for Twiddle. In his solo project, it seems Mihali plays to express himself in the moment as it strikes him with purely uplifting lyrics and divine submission. It was obvious to all fans and show-goers that Mihali played in a state of flow with eyes closed and the music guiding him through each note. The audience could feel that magic on stage and it invited them into their own state of flow, to let go and feel the music.

Aside from the magic of Mihali’s delivered performance, Mihali choosing to play at the 8x10, such a small and intimate setting leant to a very special experience for his devoted fans and supporters that were able to come together as family to recharge on uplifting jams and lyrics. To the audience, it was like Mihali invited a close group of friends to come over and watch him jam out. A very authentic experience to say the least.

Mihali’s return to the venue was also a unique treat for DMV local fans who had not seen Mihali at the venue since 2014, when Twiddle last played at 8x10. Probably one of the many reasons Mihali attracts such uniquely devoted fans is because of how he chooses to connect with his fans. This time, Grubby Bean shared that Mihali’s second baby is due on Saturday. Still he continues on his solo tour providing for his fans before his second child is born. And in typical Mihali down-to-earth style, he worked his own merch table after the end of his show to give his fans the chance to connect through quality time.

Mihali Delights A Capacity Crowd At Gypsy Sally’s
Read More
An Evening With Mihali Savoulidis As He Returns to the 8×10 With A Stripped Down Acoustic Performance
Read More
Twiddle Enjoys Television & Movies With A Very Memorable 9:30 Club Run
Read More

To Learn More About Mihali please head over to his website: