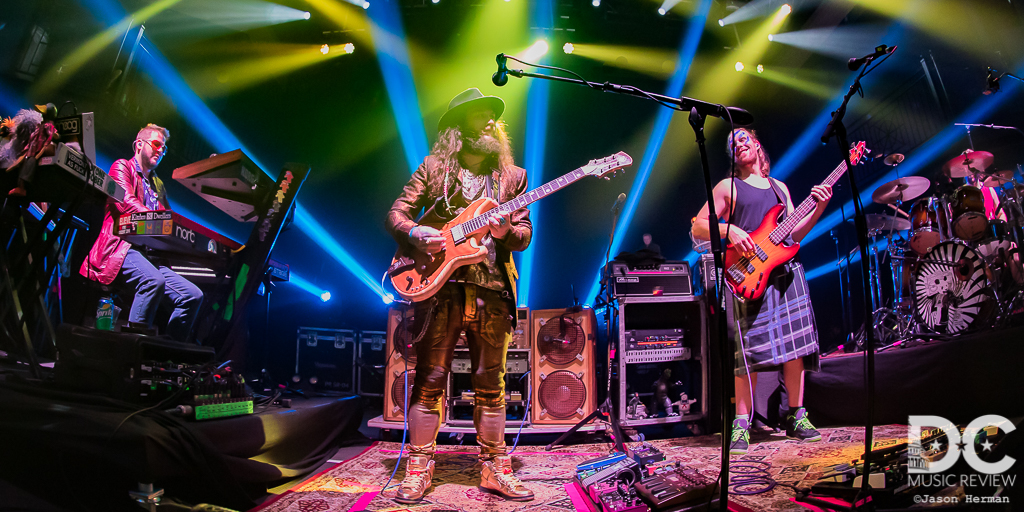 Twiddle's first headlining show at 9:30 Club was in 2016. This year, an anxious and energetic crowd greeted fans at the 9:30 Club on Friday, October 26. It was more than just a gathering of 'Frends' and die-hard Twiddle Fans — there was a buzz in the air as fans speculated whether Twiddle had any Halloween-weekend shenanigans up their sleeves or whether all that would be reserved for a few days later when they were set to appear with Phil Lesh performing a Phiddle Set (Phil Lesh + Twiddle).

Fans traveled hundreds of miles to see their beloved Twiddle perform, walking the streets of 9th and V, quietly speculating to one another which of the two massive tour buses contained their band. Inside the venue, dozens of fans walked around in full costume as sailors, sea monsters, Raggedy Ann and Andy, and colored beasts. They stirred about the venue, meandering between the bar and the merchandise booth, deciding which 9:30 Club Run poster would look best on their wall. There was one thing that was noticed by the most devoted fans  — the band was nowhere to be seen before the show.

It is typical to see one or more members of the band casually wandering in the crowd or on their way from the tour bus before being whisked away into the venue's green room. Fans most familiar with the 9:30 Club walked near the band's green room only to hear the steady drumming of Brook Jordan. For two hours this continued as hushed word spread that the band had locked themselves inside their green room and turned it into a makeshift practice space. What did they have in store for the evening? Annapolis-based Bumpin Uglies kicked off their performance at 9PM. Bumpin Uglies has been around for nearly a decade, touring around America with their groove-heavy jams that have a blend of ska, reggae, and great punk vibes. Their sound was a perfect match for Twiddle's and, as they performed, they were immeasurably appreciated and applauded by their near-hometown crowd.

At 10PM, a member of Twiddle was finally spotted. Ryan Dempsey headed out of the venue to grab a quick smoke, dressed in costume as Tyler Durden from Fight Club. As he left the building, he joked, in character, "I'm Tyler Durden man... I gotta get a smoke!" He explained to me that the band had been sequestered in their dressing room since 2PM as they practiced for the evening’s show. Meanwhile, the remainder of the band slipped out the back door and into their tour bus to get into costume and face paint for their performance. They can take our lives, but they will never take Brook's Yoda!

As the clock struck 10:30PM, the band took the stage. Mihali Savoulidis stepped on stage with his typical wide-brimmed hat and jacket, Zdenek Gubb showed up in a tartan kilt and mild face paint (Gubb has continued to get increasingly more muscular throughout the years and looked the part of William Wallace himself), while Brook Jordan showed up with a heavier woad face paint design. As the band began to set up, Jordan rushed across the stage to affix his infamous Yoda toy in front of his drum kit.

They can take our lives, but they will never take Brook's Yoda!

The band quickly burst into their beloved and powerfully blissful 'Nicodemus Portly.' After 'Nicodemus' finished, Dempsey let out a slight grin behind his gothic rose sunglasses. Those who know Dempsey all too well could see that beaming smile and gleam in his eye as he revealed a very special Halloween theme. Two more times, the band would let out a small riff and tease from a movie classic theme song, such as the Harry Potter series, as well as James Bond. It had become increasingly evident that the band had been practicing these movie themes in their makeshift rehearsal space for all these hours. By the time the first set came to 'Lost In The Cold,' the audience was deliriously dancing and finding their own special groove while waiting for the next movie tease to come. Midway through the first set, the band launched into 'Doinkinbonk!!!' which they have played every year while at 9:30 Club. Add to that, this song is always played in the first set at the 9:30 Club. The third song into the second set, after the 'Indiana Jones Theme' was performed, Jeremy Schon of Pigeons Playing Ping Pong joined the band on stage. This is not the first time Schon has shared the stage with Twiddle and as he and his compatriots in Pigeons were taking a break between tours. There was no better way to celebrate the recently announced double headliner Twiddle / Pigeons Playing Ping Pong performance at Red Rocks in the Summer of 2019. At Twiddle's fist headlining appearance at the 9:30 Club in 2016, Jeremy Schon also made a guest appearance on stage, and on this occasion he also sat in for 'Apples'.

As Schon walked off stage, audience members turned to one another and wondered if this evening was too early to start planning ahead for May 2, 2019. As the evening continued, smiling faces were aplenty throughout the audience as members grinned ear to ear through the unexpected and delightful songs such as the Jurassic Park theme, which played tenderly and magically for the crowd, giving them a few minutes to rest and enjoy songs from their youth. When the evening ended with a powerful and rarely performed 'Mad World.' This song has been performed three times near Halloween, October 22, 2011 at The  Fishtail Tavern in Bomoseen, VT;  October 27, 2012 at The Pickle Barrel Nightclub in Killington, VT; and November 11, 2014 at The Gramophone in  St. Louis, MO.  As the show ended, audience members beamed knowing they had seen an instant classic performance. Mihali would like some Fava Beans with his Jamflowman

Mihali would like some Fava Beans with his Jamflowman

Saturday's performance was an expected late show with doors opening at 10:30PM and the performance starting around 11:30PM. Some fans decided to spend the evening enjoying the sights and sounds of Washington, DC between shows, while others decided to see the early performance, Moon Taxi at 6PM, and immediately leave the venue, only to line up once again to see their beloved band at 11:30PM. Unwavering and undeterred fans wondered when curfew for the 9:30 Club was and what the evening's performance might bring. For a second straight night, the band walked on stage in costumes and delivered another memorable performance with a television-themed music show. By the second song of the night, Twiddle performed their lesser played and highly sought cover of 'Layla' by Derek and The Dominos. The evening contained wonderful and the ever-present unforgettable moments such as Ryan Dempsey performing on his beloved key tar, as he, Gubb, and Jordan had a jam-off. The evening also had a special moment when the band performed 'Gatsby The Great' and then segued into 'Ducktales Theme' while one or two members of the audience shed a tear for the beloved Chauncy. As the clock ticked closer to witching hour, the seldom performed 'Juggernaut' blared through the 9:30 Club, bringing a special close to a very special and memorable two-night-run.

With the 9:30 run firmly etched into the memory of all who attended, audience members turn their attention to Wednesday's Halloween performance with Phil Lesh of The Grateful Dead, and can only wonder what other shenanigans the band has up their sleeves when they take the stage at the Legendary Capitol Theatre in Port Chester, NY.

DC Music Review sincerely looks forward to Twiddle's return to the region in the coming years. Click here to see the setlist for Twiddle's performance at The 9:30 Club on Friday October 26, 2018

Click here to see the setlist for Twiddle's performance at The 9:30 Club on Saturday, October 27, 2018

This show was the Twiddle "Telveision Theme Show"

The following videos are provides courtesy of Twiddle's YouTube Channel. Mihali Delights A Capacity Crowd At Gypsy Sally’s
Read More
An Evening With Mihali Savoulidis As He Returns to the 8×10 With A Stripped Down Acoustic Performance
Read More
Twiddle Enjoys Television & Movies With A Very Memorable 9:30 Club Run
Read More
About the author