Galactic and AZTEC SUN Set Fire to the 9:30 Club 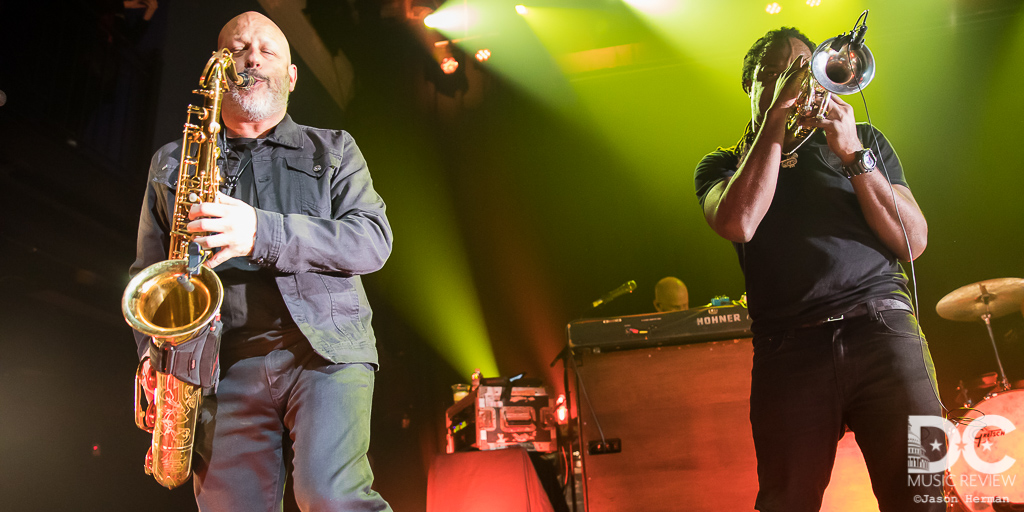 Nick has been a staple of the Washington DC music scene for decades both as a writer and photographer. We invited Nick to cover this performance because of his deep love and connection to funk music.

New Orleans' finest progressive funk band, Galactic, created a 7-alarm blaze on February 16 at DC's legendary 9:30 Club, supported by local DC favorites, AZTEC SUN. Galactic is on tour to support their 1st studio album in 3 years, Already Ready Already, produced by Ben Ellman and Robert Mercurio, released on Feb. 8th on Galactic's own label, Tchoup-Zilla Records. This album's material is composed of horn-heavy progressive funk and rock, with modern rhythms, immersed in traditional NOLA roots. Frequent denizens of the 9:30 Club, Galactic has been touring for over 20 years, releasing an average of an album a year. Galactic has made headlines recently for purchasing the legendary Tipitinas, thereby saving the legacy of the best-loved club in New Orleans. DC's soulful groove beatmasters, AZTEC SUN, fired up the crowd early on, with fans filling the main floor by the time they opened the night, opening with "My Way Home'," with a fun crowd sing-along, followed by the Go-go themed "Red Line." They continued into the songs on their latest album, In The Name of Everyone, with the poignant "District," where lead singer Stephane Detchou told the audience "this song is a love letter to a city that's changing, but not changing for everyone." Throughout the set, guitarist Ray Lamb added tasteful leads to Stephane's impeccable rhythm guitar. AZTEC SUN continued into "Cold War In the City," with killer harmonies, horns, and rhythmic claps, accompanied by the crowd. Ryan "Catch" Banning ripped a sweet keyboard solo under bright spotlight, while he jumped with his fist in the air during the powerful "Revolution," which Stephane introduced as a "fighting song," with lyrics "soul is on fire / streets are burning … the people will rise again". They continued into "Cold War", "Set You Free", then a brand new song "I Am", with a short tease of Sly and the Family Stone's "Dance to the Music" toward the end of their set, with a resounding sax solo by Graham Robertson and horn support by Adam Kent (trombonist Joe Goltz is on tour elsewhere, but will be back). Because of the time needed to switch over dozens of PA channels, much of the crowd spilled out into the street outside the club to take a smoke break, making 9th and V streets feel a little like Bourbon Street, with many fans wearing New Orleans colors of green, purple and gold, some in costumes, and everyone enjoying the mood set in motion by AZTEC SUN. Once the crowd filed back in, the club was packed to capacity, deep into the balconies. Galactic's set started off dark and mysterious, with drummer Stanton Moore playing drums standing up under bright spotlight, pounding his rhythmic rockets to launch the funk ship. Galactic's new lighting design was noticeable, with a contrast of color geometries mixed in with down-spots for artist solos. Galactic is well-known for its tight, devastating horn section (Ben Ellman on sax & harmonica, with Corey Henry on trombone and horns). Their latest lead vocalist, Erica Fells, took command of the stage, adding her powerful, soulful vocals to her incredibly talented musical hosts throughout the evening. Erica Falls was incredible with Galactic at the 9:30 Club

DC area natives, guitarist Jeff Raines and bassist Robert Mercurio, played energetically to their hometown family and friends. Raines' guitar sizzled in the newer, progressive-rock songs off their latest album, such as the instrumental, "Goose Grease", with heavy distortion and killer Hammond solos by Rich Vogel. Ben Ellman also played harmonica on a few songs, with Corey deftly delivering horns. After a few songs, Galactic stripped down to a 4-piece, switching to mostly rock, then Falls came back out to center stage, accompanied by powerful harp solos by Ellman and more slide work by Raines. At the end of the night, Galactic covered The Jackson 5's "I Want You Back" for a resounding encore that left the crowd smiling, dancing, and fully satisfied. These two 9:30 Club shows came near the end of Galactic's winter tour, ending on Sun 17th in Blacksburg VA at the Lyric Theatre. Spring tour starts promptly in early March with three shows at Tipitina's, followed by a western run in Colorado in mid March, then Victor Idaho, Missoula, Seattle, Portland, two dates in Nevada (Crystal Bay on March 24th and Brooklyn Bowl on March 26), then Tuscon, end of March in southern CA, and a summer date at Red Rocks on July 12th. AZTEC SUN will be playing the Brooklyn Bowl NYC on March 18th, and has also announced MerleFest on April 28th, as well as summer dates at Lakefest on June 15th and Hudson River Park in NYC on July 7th.

Backstage/onstage at @930club. See our Instagram story for more photos and videos from last night’s show with @highmightybrass. Tonight we are back at the 9:30 Club with @aztecsunband.(Photos by @davidylee)

Obligatory @930club cupcake shot. Playing tonight and tomorrow at one of our favorite venues. Click to buy In The Name of Everyone by AZTEC SUN

For more information about Galactic please visit their webpage.

For more information about AZTEC SUN please visit their webpage.