Getting Weird With Keller Williams 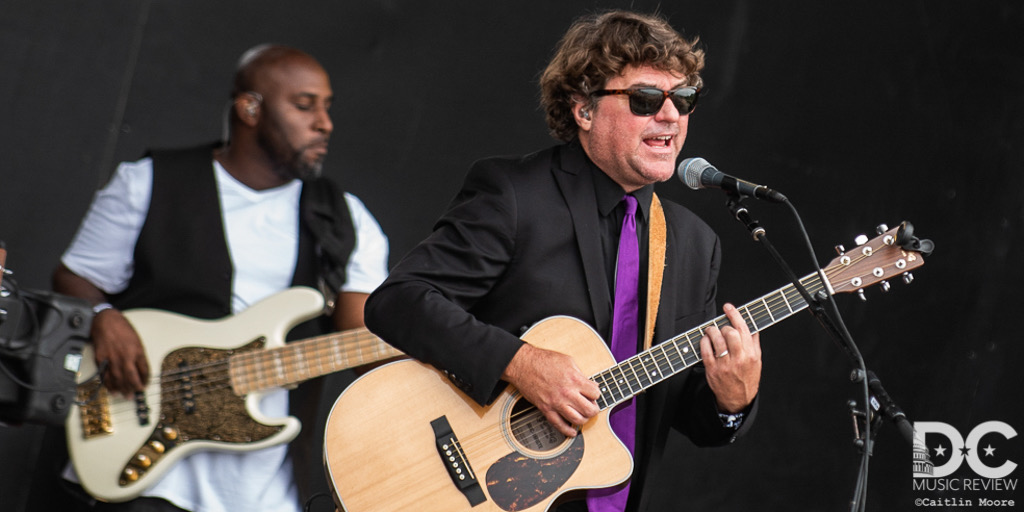 Karin McLaughlin: So, I noticed you have a local number ​and I didn't know you're a Fredericksburg guy.  So you're kind of local to DC.

Keller Williams: Yeah, born and raised - Charlottesville and Virginia Beach.  Traveled for a few years and lived out in Colorado for a few and then came back in 2000.

KM: Nice. Did you ever come up here for shows when you were younger?

KM: What was your favorite venue back then?

​KW: I ​would always go to shows at The Bayou and the original Birchmere, back when it was just 250 people and there were​ little monitor wedges on the ceiling.

KM: Funny story I actually just went to the Birchmere for the first time which is unbelievable according to anyone else I talked ​to. KW: Yeah that is a great venue over there in Alexandria.  I also used to go to the Black Cat a lot but The Bayou was where I played my first show as an opener in DC.

KM: I never got to experience The Bayou, but I just saw Sam Bush and The Travelin McCourys the other night at Birchmere and it's funny because someone that I told I was going there mentioned that you sit and don't talk during the show.  When I heard that I found it pretty difficult thinking about who I was going to see.  It also made me think about how I was reading an interview with you where you were talking about the people that come to shows and talk the whole time or people that come to shows and are expected to sit down.  What you said was funny about people that come and just talk through shows, that you just kind of do the same to them and turn up ​your in ear monitors and you just tune them out like they tuned you out (laughs).

KW: Yeah. There is a big difference in playing those types of venues, you know?  Birchmere or even Rams Head in Annapolis, I'd see people that I love and it'd be pin drop silent.  That's more for a listening audience, which is really a dying art form - especially in the jam scene - people sitting and listening just doesn't happen. In all honesty, I'm happy to have any type of crowd really (laughs) and it's really nice, as a performer, to have a different format every so often. If you're in a big, open space like the 930 Club, where everyone's on the floor and everyone's socializing and ready to party, I can play all the crazy songs.  Then there are some songs that I just won't play, they don't translate well, so it's nice to get to play those to a listening audience at those type of venues.  Songs that are more in depth and tell a story that take more attentiveness to listen to every word. That's why places like Birchmere are so special to me because there's not many of them left, there's not many left in the country.   A lot of people don't dig the whole sit down thing a bunch.

KM: Yeah, it's a struggle when the music makes you move.

KW:  It is.  The way I look at it, I'm scheduled to retire in 2037, possibly 2040 if I decide to refinance (laughs) but those are the types of places I'll need to befriend and if I'm that age I don't know if anyone that will want to come see me is gonna be wanting to stand up.

KW: Yeah, I have to do a show like that every once in a while to prepare people for my old age (laughs).

​KM: Or maybe you could do a nursing home tour  (laughs).

KM: ​Speaking of the simple approach, I appreciate the ​simplicity of what you do when you're onstage.  A lot of times you're up there barefoot, you're doing acoustic sets, your album names are all one word.  Which, by the way, I'm still waiting for you, at the very end of your career to tell us all the joke's on us and that every single one of your album names have now made a whole entire song and we just weren't paying attention or something.

KW: Wow, yeah.  That could happen.  In hindsight I would've used some nouns and adjectives as album names and that would've worked!   They're all just one syllable and trying to describe the entire compilation of songs in one syllable, you know, trying to simplify it.

​KM: And how is it that you're able to put out so much new music when most people, you know, they'll put out a new album once every few years.  Here you are just​ constantly producing ​and your creativity is on overdrive almost. KW: Well, it's the simple answer is that I fund everything myself. No real restrictions were put on me, at least until now.  ​By the time this new Keller and the Keels record comes out in less than a month, it will be probably the third one in a year, so the grown ups have kind of put me on restriction as far as doing more records.

It's good right now because, you know, I've definitely exhausted a lot of material. ​ Now I'm starting to​ actually really focus on writing again and it's a very slow process to come up with something that makes it in the shows.  This next record might not necessarily be that, it might be more like songs that are pieces. I'm not really sure what the next records going to be like. I think I got about a good year to figure it out.

KM: How is the energy shift from doing ​ writing and creating and producing your own thing to then doing stuff like ​Pettygrass, performance wise?

KW: Performance wise, it's two totally different things you know?  I do my best work in the studio before noon.  Then as the day goes on, I get sloppier and sloppier (laughs) in the studio, but ​the live thing is kind of like the opposite. Live performances, I come alive ​around 8:30 at night when the show starts.   ​ On a day of show, pm turns to am so it's the start of the work day when you hit the stage.  Especially with the Hillbenders, it's a very fun energy that surrounds them.

KM: True or false you like to get a little weird with music and performances and stuff on stage and and look to be a little bit different?

KW: Well, define weird.  I definitely try to entertain myself up there and that may come across as a little strange.

KM: (laughing) Weird is a totally good word the way I use it just to confirm.

​KW: Yeah, no weird is a good term.  My daughter is 15 and she is starting to get it.  She'll say, "Dad you really transform into a whole 'nother person up there on stage" and I said, "Ohhhh, now you're starting to get it!"

KM: Who is your favorite person to get weird with onstage?

KW: ​Vince Herman from Leftover Salmon.  Larry Keel is definitely one too.

KM: (laughs) Yes, Larry Keel I would imagine should be on that list.

​KM:  ​You ​seem to always do a Thanksgiving show around the area.  How is it to be able to come to a place where you grew up and ​spend ​the time ​with family and friends that are ​so close?

KW: ​Exactly.  Yeah but ​​​The National in Richmond and then up in DC have been staples this time of year and I'm really excited to play at The Hamilton.  That's gonna be a great show with Lindsay Lou opening up that night.  it's gonna be really cool to bring it back to that area - I'll be seeing a lot of familiar faces there so it'll be nice.

​KM: I know you have done a ton already in 2019 and now that we're closing it out, is there something you can think of off the top of your head that was a highlight or ​a once in a blue moon thing that's happened in that you've kind of held special?

​KW: Yeah - we had a great time playing over the summer at Red Rocks with String Cheese Incident.  It was the 20th anniversary of the release of Breathe which was just re-released and we played it in its entirety so that was really cool!

KM: Red Rocks is pretty magical - That's definitely one for the memory books! Well Keller, thanks so much for talking with me and I look forward to Thanksforgrassgiving!

$40 - Pre-Show Hang (Does not include ticket to the concert)