Rising Appalachia Plays A Magnetic Performance At The Hamilton 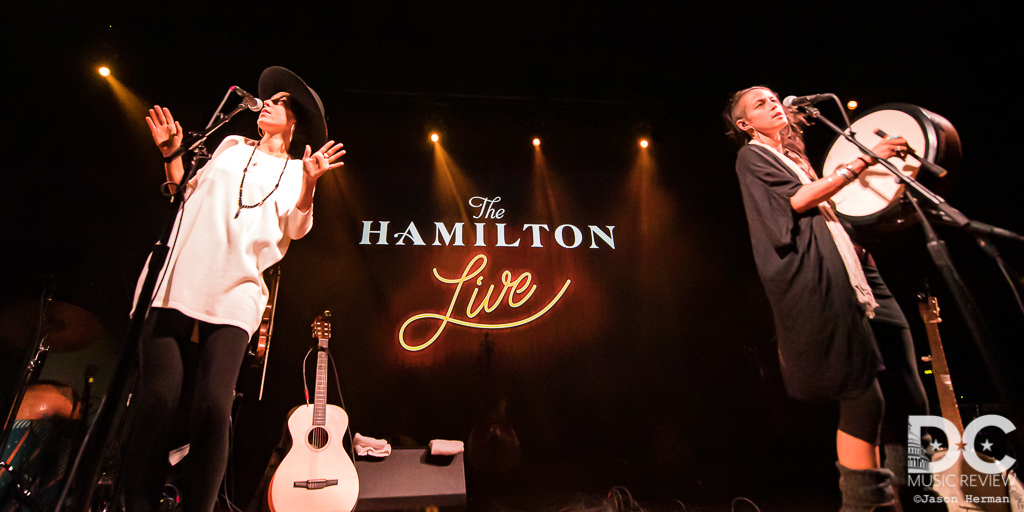 Rising Appalachia got to spend a memorable few days in D.C early last week that included not only a Tiny Desk concert recording at NPR studios, but also a sold out show at The Hamilton where they shared music from their newest album, Leylines. ​​​​ ​Forever wanting to connect with their audience, and people in general, both sisters shared words with ticket holders every chance that they got.  Asking who was seeing Rising Appalachia for the first time and who had seen them before, Leah noted that the second group was 'smaller but louder'.   Remembering the first time they had played at Busboys and Poets, they were also incredibly humbled by the sold out crowd that joined them last Wednesday.

​Playing older songs like "Wider Circles" and introducing the audience to a new sound with their latest work, the blend of musical instruments and angelic voices was pure perfection.  Noting her favorite song off the new album "Lover Her in the Morning", Leah referred to is as a 'medley of old traditional fiddle tunes that's a slow burner' and was beautifully composed and performed. Arouna Diarra on the n’goni

The sisters oozed compassion and connection as they also tried to encourage and inspire audience members.  Telling concert goers that there are so many ways to show up right now - prayer, protest, numbness, and plenty more - they also wanted everyone to know that there's space for it all and that your unique way of coping with the distressing and upsetting times whatever it may be, is supported by this very loving community.

Being that it was just a week before Thanksgiving, they reflected back on where they were just a few short years ago when they were invited to join protestors and perform at Standing Rock.   A meaningful experience and one that represents the impact that they have on communities who stand for what they believe in, the sisters were honored to be a part of the fight.   A fitting song to play as a reminder to the power of the people, as Leah noted, was "Resilient"

Arouna Diarra on the n’goni Very happy and excited to have new band members on tour with them, during a part of the show, Leah and Chloe even left the stage and the audience in the hands of their newest additions.  Incredibly talented and able to hold their own, fans loved the musical sounds that definitely got their feet moving courtesy of Irish and West African sounds.

Closing out the show with my personal favorite song off the new album, "Cuckoo" that they dedicated to the planet, every person in the room could feel the love put into the writing that and feeling that the band brings to the stage.  Rising Appalachia not only cares about and advocates for the underdog and the under or misrepresesnted, but they also care about the connection to community and each other.  Getting to share that love and purpose with a group that cares so much is truly a blessing.

And then THIS just happened! @tinydesk @npr @nprmusic

The following video is courtesy of NPR Tiny Desk Series.

For the full NPR Tiny Desk appearance on NPR, please click on the following link.