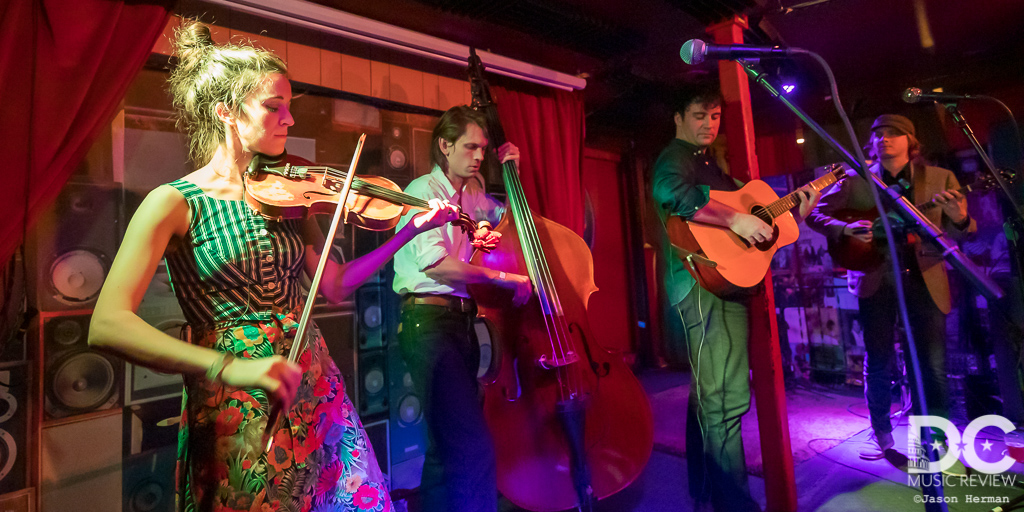 On a cold winter night, hundreds of fans navigated through the energetic streets of Adams Morgan, walked down the steps of Songbyrd Music House and left the hustle and bustle of Washington DC behind them. Upon entering the double velvet curtains, these fans were transported to a room filled with the captivating sounds of instrumental Americana music delightfully performed and delivered by Hawktail. For fans of Punch Brothers, Crooked Still, or those who attended the 2019 Charm City Bluegrass Festival, Hawktail is the best-hidden secret in their genre. Based on the near-capacity crowd at Songbyrd Music House, the secret is not so secret anymore, and fans traveled from around the region to see this band. Fresh off their recent sophomore release Formations, the band has taken to a series of barnstorming weekend tours to the great delight of their fans.

Hawktail is the instrumental acoustic quartet consisting of fiddler Brittany Haas, bassist Paul Kowert, guitarist Jordan Tice, and mandolinist Dominick Leslie. Each member of Hawktail is truly a stand-out musician in their own right, and collectively create a sound all their own.

The evening's performance began with the invigorating song "Annbjørg" off of Formations. The song was an introduction to how the band skillfully intertwined their instruments together into one cohesive and magical music fabric. One could not help but notice the rose affixed to Brittany Haas's fiddle gleefully dance in the stage lights as Paul Kowerts bass scroll would sway from side to side with poise. Dominick Leslie's brilliant mandolin playing continued to pierce the musical hearts of fans throughout the night, while Annapolis born-and-raised Jordan Tice would glow in the delight of performing in front of a hometown crowd with many friends in the audience. Above all else, the sincere joy between and within each band member was evident. Throughout the evening, the audience would be transfixed on every note and experience the waves of slow and passionate notes to energetic peaks of collaborative musical delight. The band spent the evening in this crowded music hall sharing playful musings with the crowd, including how Tice would make sure to do his best to provide a sultry introduction to "Dandelion."

As the evening's performance was winding down, Kowert told the audience that they were going to perform one more song for the encore. The enthusiastic audience yelled back "5 more," "10 more," "just keep playing!" The band beamed with contentment with Kowert quick to respond by saying "let's just start with one and go from there." Although Hawktail did not perform five or ten more songs as the fans requested, they did leave satisfied with two incredible songs to end the evening.

Without a doubt, DC Music Review left this performance already looking forward to the next opportunity to see Hawktail perform live in the DMV.

[Editor Note:  Now that you have gotten to the end of the article, we recommend you re-read it while listening to  Annbjørg"]