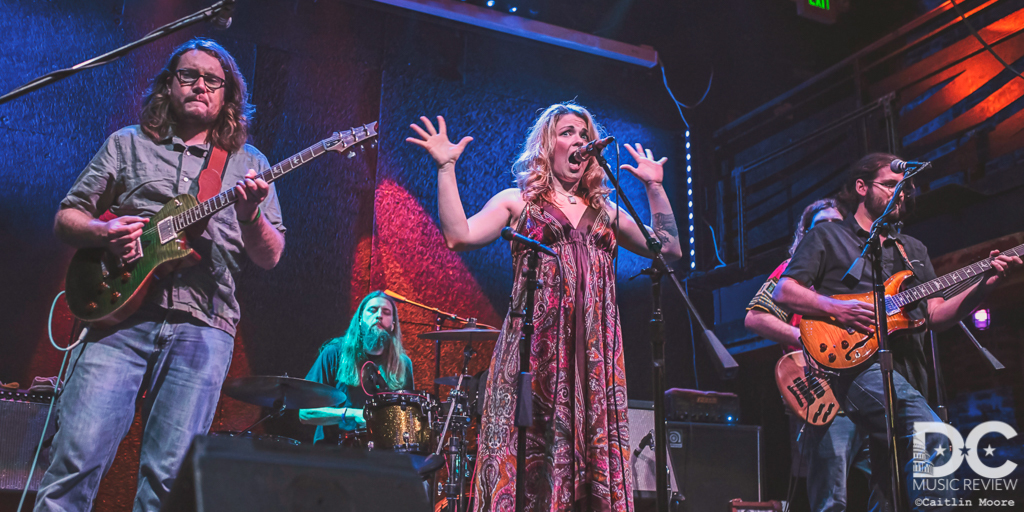 Hayley Jane and the Primates returned to the 8x10 in Baltimore on Thursday, May 3. Regular DC Music Review readers should be no strangers to Hayley Jane and the Primates at this point. We adore covering these shows because this is a band that routinely delivers a powerful and playful performance that is hard to look away from.  Hayley Jane leads the crew with  compellingly pipes and a mesmerizing stage presence. The Primates are made up of Justin "Juice" Hancock (Guitar/Vox), Josh "Tree Beard" Carter (Bass/Vox), Greg "Smitty" Smith (Guitar/Vox), Ryan "The Claw" Clausen (Drums).

This show, hosted by All Good Presents, marked their first time headlining the 8x10, a venue that is a staple in the Baltimore music scene. When last they were there it was supporting Pink Talking Fish during a tour together.  This current tour was on a slight break during April while Hayley Jane and Ryan Montbleau took to the road to support their new album as Yes Darling, which brought them through DC at Gypsy Sally's.

"This is a band that routinely delivers a powerful and playful performance that is hard to look away from. ＂ Click To Tweet

Somehow Hayley Jane and the Primates found time to write some new music in between their tour, Hayley recording that Yes Darling album, then touring to promote it as well. It did not take long that night before they trotted out a new and forceful song titled, "Blue Planet," replete with touches of fun choreography in typical HJ&P fashion, and plenty of space to jam.

Ron Holloway, a local favorite who the band met and recently played with in Ohio earlier this year, joined them for a few songs early on, taking the stage for "Man Acrylic." The "I Can Do It (Poo Jam)" came with some lyrical teases of "Rainbow Connection" and "Somewhere Over the Rainbow" as the song disintegrates in the second half and provides Hayley with an opportunity to play around with her vocals. Last time we saw them play this song  in the area at Pearl Street Warehouse it was  a "Rain, Rain, Go Away" nursery rhyme tease,. Next up was "Play on Plato," a quiet and quirky song with opening lines that recall days that now feel so long ago, when we had to trade Phish tapes around to hear live recordings. In the year since we heard them play this song at Gypsy Sally's, they've slowed it down significantly, which allows for a less cluttered chorus and led to a graceful sax solo by Holloway.

Now halfway through the set, Hayley said to the crowd, "It always brings me great joy to perform this next song in this city." That, of course, was a lead-in  to "Cosmic Katrina," a song  she'd strongly hinted would make an appearance this night. Their first cover of the night came shortly after that, with Justin Hancock taking a rare lead on vocals for Ween's "Chocolate Town."

Ron Holloway joined them again to close out the last four songs of the night, all upbeat dance numbers, including the only other cover of the night, "Magic Dance" by David Bowie. This is one of their go-to covers, where all members of the band get in on the singing... and the laughter. Another local talent, Amy Wilson, took the stage to join vocals for "Make it Alright," a fan favorite and routine jam vehicle that frequently sees sit-ins. "Hey Sister" closed out the night on a powerful note.

Hayley Jane and the Primates are back at Brooklyn Bowl tonight, then have a brief break before hitting some festivals throughout the summer, including the Peach Festival in Pennsylvania on Friday, July 20. Those of you making it to the Peach Festival will want to put this band on your do-not-miss list as they always deliver hard.

"It always brings me great joy to perform this next song in this city.＂-@iamhayleyjane told the crowd before playing their quirky Cosmic Katrina Click To Tweet

*with Ron Holloway on sax
^Rainbow Connection teases, Somewhere Over the Rainbow tease
+with Amy Wilson on vocals

A post shared by Hayley Jane and the Primates (@hayleyjaneandtheprimates) on May 4, 2018 at 11:32am PDT

Applecore!!!!
Can you guess where Hayley Jane and the Primates is playing tomorrow?
Catch us at The 8×10 at 9pm!