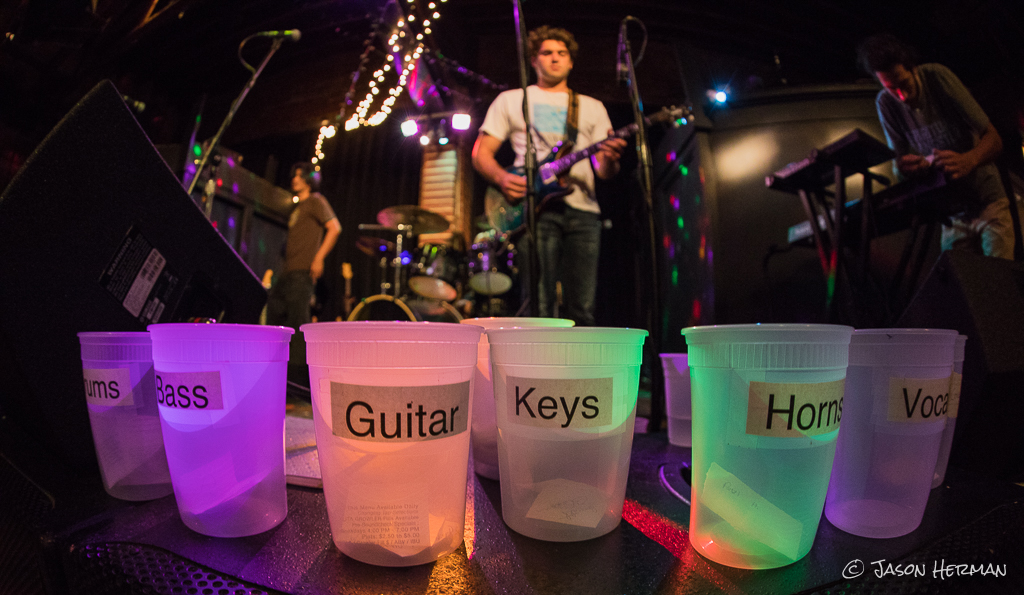 The e-mails and text messages came early yesterday, "You have to come out to IOTA's tonight!  This is the last IOTA Jam night!"  For the past year, every Tuesday night people have made the trek to the IOTA Club & Cafe in Clarendon with their music gear in hand, hoping to jam with fellow musicians.  In fact, one musician last night said that he drives from Haymarket, Virginia to IOTA's on a weekly basis, just to be able to play with fellow musicians, a journey of 30-40 miles.

For months now rumors filled the local Washington, D.C. music scene about the demise of this legendary music venue. This venue was once surrounded by empty car parking lots, so much so, that people once referred to this part of Arlington as "Car-lington." Arlington has seen gentrification for several decades and several old favorites, such as the original Bardo Rodeo, have since been plowed under and made way for a revitalized and gentrified Arlington.  According to confirmed sources, IOTA will be closing it's doors in two months time and will be honoring all existing bookings.  As the house band took the stage it was announced that "Tonight is a celebration!  We can talk about all that sappy stuff later, but tonight is a celebration!"  Fans and musicians were quietly assured that a new space is being sought and that jam night will continue in the future.

On a normal Tuesday night a small handful of locals and musicians gather to catch a bite to eat, share a drink, enjoy the music and share stories.  Tonight however, IOTA's was filled to a capacity crowd.  Local music heroes such as members of Moogatu, Of Tomorrow, and Better off Dead filled the audience.

The rules of the open jam are simple: musicians of all skill levels place their names into a cup labeled with a specific instrument and multiple times a night a new supergroup jam band is assembled from picking names out of a series of cups at random.  Musicians wandered into the venue with guitars on their backs, drumsticks sticking out of their back pockets, and instrument cases in tow; and anxiously wait in the audience for their name to be picked.  Last night, musicians knew that this was one of their last chances to perform at IOTA, especially to a capacity crowd. So much so, that it reminded several fans of "The Claw Scene" from Pixar's Toy Story.

As each musician got off stage, a huge smile appeared on their face as they had been chosen and were so grateful for the opportunity.

Throughout the night the audience was treated to exceptional jams by the house band, local musicians, and at 10:15 p.m. Of Tomorrow took the stage.  At 11:30 p.m.  the audience was told "Tonight we are going late!", and by 12:30 p.m. "Tonight is not done!​ Let's get this party started!"

At a quarter to 1:00 a.m. members of DC Music Review left the venue, while the street was still packed with musicians and concert goers alike.  As we walked away, you could still hear the ambient sounds of music reflecting off of nearby buildings, which filled the streets with a reminder of the concert taking place.  IOTA may have had it's last jam, but it certainly did not go silently into the night.