Moose Blood and Lydia Bring the Indie to the 9:30 Club 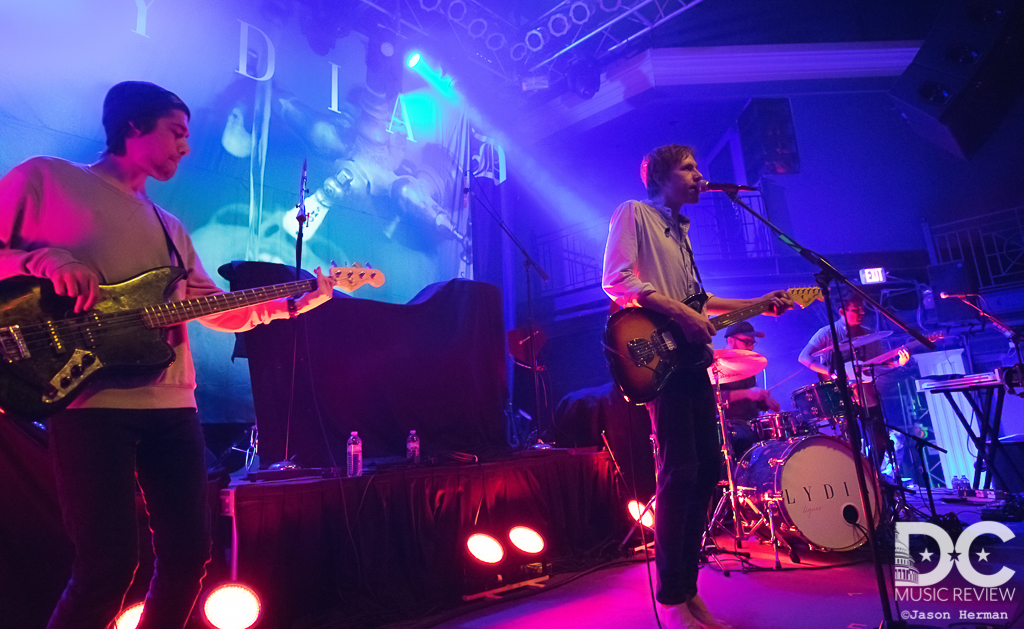 Picture this: It’s the final act of the latest rom-com blockbuster. Camera pans to a sulking protagonist pacing in angst, not caring that he’s trampling all over his concert tees and flannel button ups. Until, it clicks. He’s gotta go and get his girl. And in that moment when he decides to do something and turn his life around, it wouldn’t be out of place to hear Lydia’s “When It Gets Dark Out” playing him out. The ethereal rockers played the 9:30 Club on Sunday night with the enthusiasm and passion of a lust-fueled boy speeding down side streets trying (and likely ultimately succeeding) to win back the girl.

The Arizona based indie band pulled in a grungier side of DC, thanks to emo-pop British headliner, Moose Blood. Despite the nuanced differences between the two bands, concert goers gave their all to Lydia, welcoming and closing each song with cheers and shouts. When Keller shouted, “Has anyone ever heard of Lydia??” into the depths of the packed room, he was met with resounding applause and encouragement. The five piece band played in front of a massive canvas that boasted their latest album’s artwork. Antelman performed barefoot, grinning through lyrics and flopping his arms relaxedly in tune to the beat, giving off an unexpectedly chill vibe despite the heavy bass and electronic components. There was never a quiet moment during their set, with spacey electronic intros fading in and out, leading into the meat of the next songs.

Mid-way through their set, Lydia played their latest single “Goodside” off their upcoming album, Liquor. The catchy single, if representative of the rest of the album, is indicative that Lydia’s sound is growing into something edgier and louder than their previous works, without necessarily straying too far from the classic Lydia sound that their fans grew up on. Heavy drums and a shoutable chorus define the powerful new single, making it an excellent live performance piece.

An enthusiastic trio of girls danced on the balcony level of the club, singing along to every word. They caught the attention of the band who gave them a shout out, only to follow up with, “sorry to call you out!” However, based on their grins and continued dancing, I doubt any apologies were really necessary. Moose Blood took the stage next, playing with a bone rattling fervor that left my heart skipping beats for hours after the show. After a deafening and powerful opening track that was met by even louder cheers, lead singer Eddy Brewerton (vocals, rhythm guitar), scratchily called out, “I’m so sorry, I have laryngitis, but I’m going to give it my all.”

And he did. They did. Had Brewerton not mentioned his illness, it’d have been impossible to tell. Moose Blood played expertly and fluidly, with fans filling in lyrics when Brewerton needed to give his vocals a break. A swirling mosh pit of head bangers and fist pumpers formed, concertgoers chiming in enthusiastically when Moose Blood said: “If you know the words, help me out!” With the crowd so enthusiastic and willing to participate in the music, Moose Blood were grinning happily as the crowd nearly drowned them out. Moose Blood are finishing their US tour with Lydia before heading back to the UK for the summer festival circuit, so make sure to check them out while you can. As for Lydia, keep your eyes and ears peeled for their sixth album, Liquor, scheduled to be released on July 13.

1. Talk in Your Sleep

5. You Left in The Worse Way