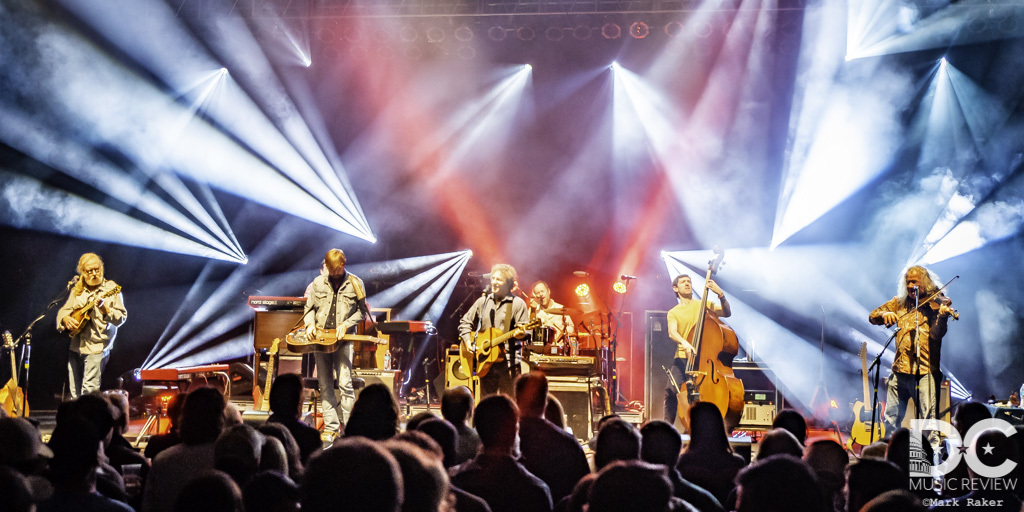 Railroad Earth (RRE) ended their winter tour with one night at The National in Richmond, VA and two nights at the 9:30 Club in Washington DC.  They showed their versatility and longevity by playing over 50 different songs during these three shows. Fans each night excitedly said that they heard their favorites, there was truly something for everyone.  Each of the shows was the best one could hope to hear.

RRE recently lost founding member and multi-instrumentalist Andy Goessling. Andy was on the minds of the band, the crew and the Hobos, as RRE fans call themselves.  The band line up for these shows consisted of Richmond's National Theater is a beautiful historic theater built in 1923. It reopened in 2008 as a music venue and is on the National Register of Historic Places.  On Thursday night, The National was comfortably crowded with a great fan crowd yet room to dance. The mellow crowd spent the evening  singing and swaying with the music. One of the many times John Skehan treated us this weekend was when he played the Irish Bouzouki on  “Where Songs Begin” Several times the audience erupted in loud song and hand waving, “Came Up Smilin’” was one of those moments. The crowd, most of whom were smiling from ear to ear, started to do an informal wave. As with every RRE show, each member of the band had his chance to shine. Tim Carbone’s fiddle and Skehan's mandolin kept the smiling going with an  incredible dueling instrumental jam. After a brief set break the instrumentals continued during “Saddle of the Sun”. During the show Andrew Altman played both stand up and bass guitar and Skehan played both mandolin and keys.  Local talent, Jay Starling, was on dobro and lap steel guitar. At all RRE shows there is a mix of hardcore fans, Hobos,  who travel for hundreds of miles,  new fans seeing them for the for the time, and everything in between. Chuck drove down to Richmond from Maryland to see RRE live for the first time and was instantly  hooked, continuing to listen to them all weekend. Scott and Tammy, who came from the Delaware  shore to DC for the 9:30 club shows have seen RRE well over a hundred times. Tammy’s first show was in 2007 and Scott's first was in 2003 at Grey Fox Bluegrass Festival. The New Jersey-based JamGrass band has a liking for the 9:30 Club and has played there annually since 2013 – this year returning again for back to back nights – with shows that the local Hobos have been waiting to see. On Friday, March 22nd  there were over 500 fans and Saturday the 9:30 club was at near capacity. .Friday night the jamming started early with “Storms” and continued throughout the entire show. “Raven’s Child>Black Bear>Grandfather Mountain” got the crowd moving.

Another fan highlight was a 28 minute “Black Elk Speaks > Like a Buddha> Give That Boy a Hand”.  Lindsay Lou, who supported RRE at all three shows, joined the band as lead vocalist for the encore of “Wayfaring Stranger”.

Saturday night Lindsey Lou opened her set with “Southern Moon.” Tim, Andrew and Carey joined Lindsey on the last few songs to finish her set. The night was electric; from the start the energy of both the band and crowd was off the charts.

Carey Harmon made the drums sizzle all weekend long. When he started playing the drum intro on "Mighty River" the crowd was screaming with anticipation for the familiar lead-in.

Tim put down his fiddle and played the guitar for “When the Sun Gets in Your Blood” he also played a shaker stick. For the last song of the first set we were treated to Lindsey Lou on guitar and lead vocals for “Long Face” written by Bobby Charles, it was the first time they have played it in concert.

The second set opened with “Walk Beside Me”. On Saturday night the Hobos were ready when Todd Sheaffer hit the chorus lines of “Elko,” “I need a card, Hit me Lord, But not too hard“ and thousands of playing cards flew from everywhere in the 9:30 club. They also played fan favorite “Warhead Boogie.” RRE ended the final night of the winter tour with RV. It seems appropriate finale as after the show they hopped back into the tour bus and headed for home.

The Spring Tour starts on April 3 in Houston Texas. Although they won’t be back in DC on the spring tour, they can be seen not too far away in Cumberland, MD at DelFest. RRE will be playing a late-night set and closing out the festival on Sunday.   See the Spring Tour schedule at http://railroad.earth/tour.  Many hobos are counting down the days until DelFest or whatever their next show opportunity will be. Opening for RRE each night was  Lindsay Lou and Joshua Rilko.  Her sound is rich, expansive and Lindsay's vocals & lyrics are captivating and hit deep. Rilko accompanied her with the mandolin. Her brand new CD, Southland, is a collection of songs examining the range of emotions and complex themes of our changing times; delivered with soulfully fierce intensity and tender intimacy that demands your attention.. She played a mix of originals and covers. She also told stories about the Strings and Sol Festival and touring DC. Lindsay Lou will be playing with RRE on May 15 - Slowndown - Omaha, NE  and May 16 - Rust Belt - East Moline, IL,. Lindsey  is also on a national tour and will be playing at a number of festivals including Camp Greensky and DelFest.  see https://www.lindsayloumusic.com/tour for more tour information.

In addition to the Railroad Earth tour below, there are also other opportunities to see Tim and Todd with solo shows or guest appearances. Todd Sheaffer will be playing Friday, April 19, 2019  at The Kennett Flash, and  Tim Carbone will be joining an incredible lineup for the Unlimited Devotion: All-Star Grateful Dead Celebration 5/31- 6/1 at the The Ardmore Music Hall.

Enjoy the audio recording by:  TaperJeff

Enjoy the audio recording by: ph_2k